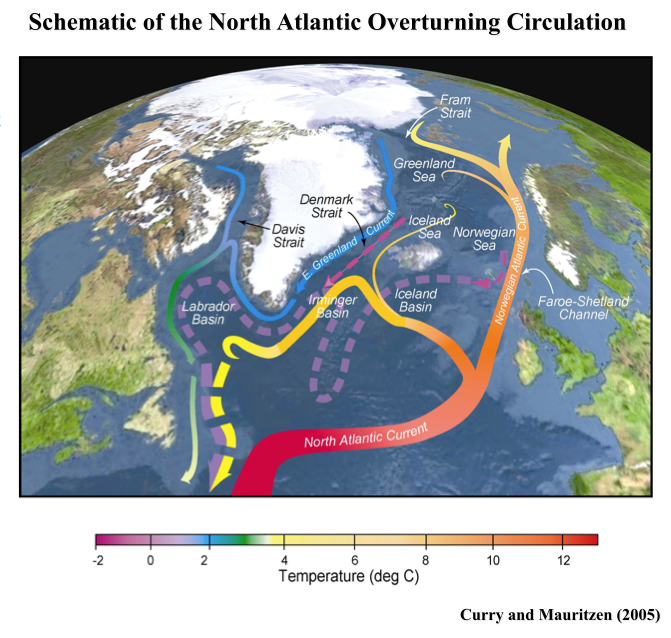 As part of the planet's reciprocal relationship between ocean circulation and climate, the AMOC transports warm surface water to high latitudes where the water warms the air, then cools, sinks and returns toward the equator as a deep flow. 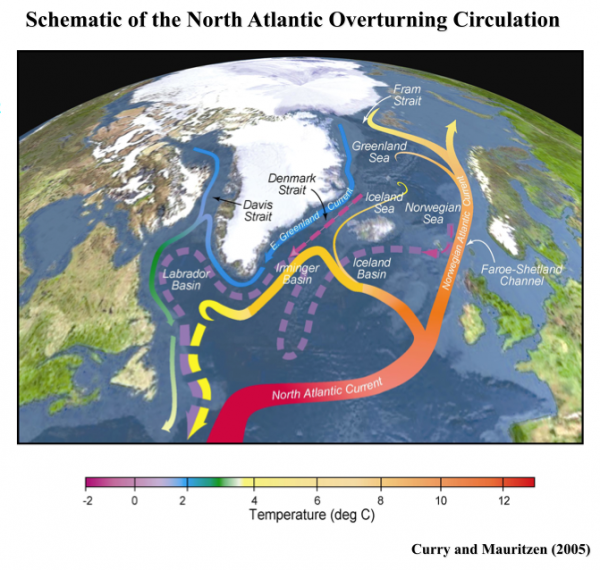 Crucial to this warm-to-cold oceanographic choreography is the Denmark Strait Overflow Water (DSOW), the largest of the deep, overflow plumes that feed the lower limb of the AMOC and return the dense water south through gaps in the Greenland-Scotland Ridge.

For years it has been thought that the primary source of the Denmark Overflow was a current adjacent to Greenland known as the East Greenland Current. However, this view was recently called into question by two oceanographers from Iceland who discovered a deep current flowing southward along the continental slope of Iceland. They named the current the North Icelandic Jet and hypothesized that it formed a significant part of the overflow water.

Now, in a paper published in the August 21st online issue of the journal Nature Geoscience, the team of researchers – including the two Icelanders who discovered the current – has confirmed that the Icelandic Jet is not only a major contributor to the DSOW but "is the primary source of the densest overflow water." They concluded that NIJ indeed carries overflow water into Denmark Strait and is distinct from the East Greenland Current. The NIJ constitutes approximately half of the total overflow transport and nearly all of the densest component. 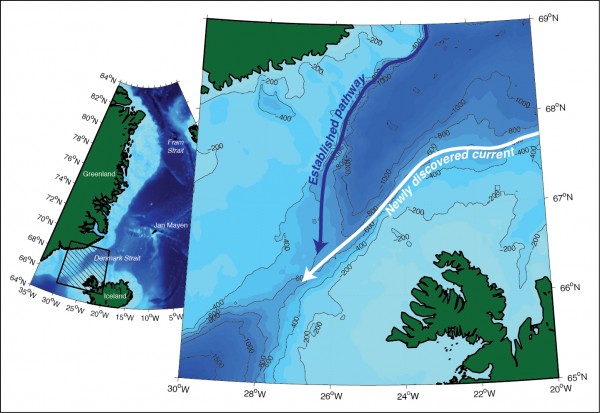 The researchers used a numerical model to hypothesize where and how the NIJ is formed. These results implicate water mass transformation and exchange near Iceland as central contributors to the deep limb of the Atlantic Meridional Overturning Circulation, and raise new questions about how global ocean circulation will respond to future climate change.

Researchers identified a new paradigm, likely a new, overturning loop of warm to cold water. The results have "important ramifications" for ocean circulation's impact on climate. Scientists have been concerned that this overturning loop – some call it a conveyor belt – is slowing down due to a rise in global temperatures.

They suggest that increasing amounts of fresh water from melting ice and other warming-related phenomena are making their way into the northern North Atlantic, where it could freeze and decrease the need for the loop to deliver as much warm water as it does now. Eventually, this could lead to a colder climate in the northern hemisphere. 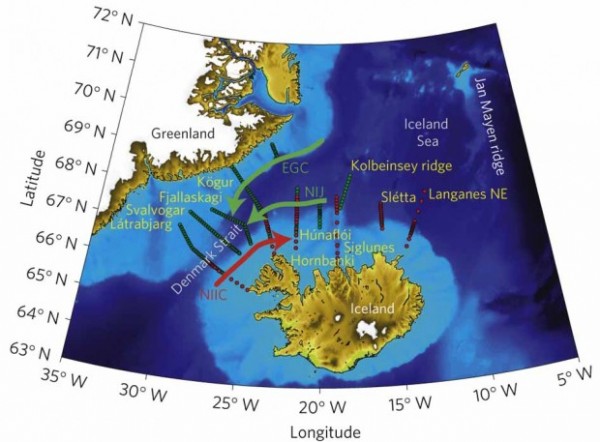 While this scenario is far from certain, researchers need to understand the overturning process, to make accurate predictions about the future of climate and circulation interaction.

Pickart and a team of scientists from the U.S., Iceland, Norway, and the Netherlands are scheduled to embark on August 22nd on a cruise aboard the research vessel Knorr. They will collect new information on the overturning in the Iceland Sea. The cruise will be chronicled at the North Icelandic Jet Cruise website. (TerraDaily) 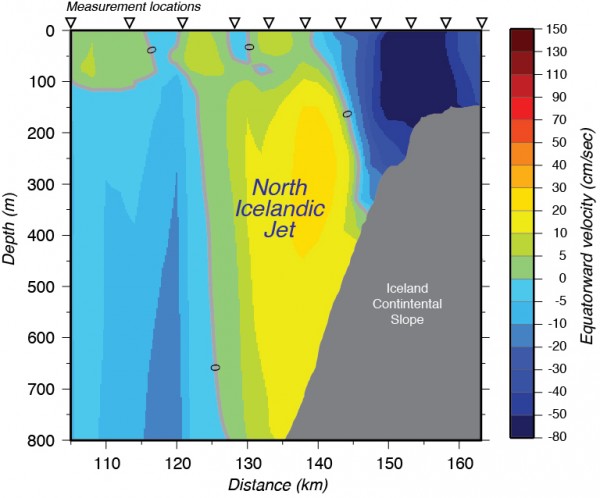 The North Icelandic Jet is a deep, cold current that runs west across the top of Iceland, then southwest between Greenland and Iceland at a depth of about 600 meters (almost 2,000 feet). It can carry more than a million cubic meters of water per second. That’s a lot, in terms of land-based rivers – at least five times what the Amazon dumps into the ocean. But Pickart says that it’s not much by ocean standards. The Gulf Stream south of Cape Cod can move easily a hundred times as much water.

The North Icelandic Jet is deep and narrow (about 12 miles wide). But the thing that has really kept it hidden is the fact that it’s made up of water that ‘looks’ a lot like the water around it – similar temperature, similar salinity. The only way to ‘see’ the North Icelandic Jet is to measure the speed at which water is moving at a lot of different depths and locations. When scientists did that, this fast-moving ‘jet’ of water became apparent.

The discovery of this one little current changes our understanding of a huge system of ocean currents collectively known as the Atlantic Meridional Overturning Circulation (AMOC), or colloquially, the ocean conveyer belt. A conveyer belt usually carries something; this one carries heat.

The Gulf Stream (and the other currents it becomes or splits into) carries warm surface waters north, warming the air and moderating the climate of Northern Europe and the U.K. As it gives off its heat (by evaporating), the water cools and becomes saltier – in other words, denser. At a few key points, it sinks and joins other deep, cold currents flowing back toward the equator. 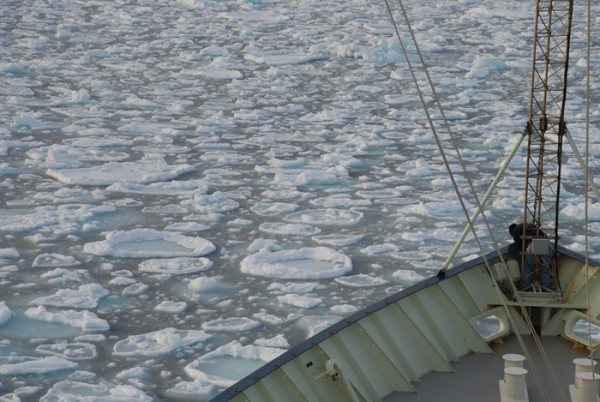 The straight between Greenland and Iceland is one of those places and, as it turns out, the North Icelandic Jet makes up about half of the headwaters of that deep, cold southward flow. It was previously thought that the East Greenland Current was the primary source.

Some of the most apocalyptic climate change scenarios out there center on the possibility that increased precipitation and rapid melting of Arctic sea ice and Greenland’s glaciers could make Arctic waters too fresh to sink. Without that pull, the ocean conveyer belt could slow down or even stop completely, plunging northern Europe into an Ice Age. This has always been a remote possibility, at best. Still, the repercussions would be dire if it did happen.

Here’s the good news (maybe). Meltwater from Greenland is a major contributor to the East Greenland Current, but not to the North Icelandic Jet. Our new knowledge of the North Icelandic Jet opens the possibility that the ocean conveyer belt may actually be less sensitive to melting glaciers than previously thought. Pickart and Spall say that’s possible, but by no means certain – that a lot more research is needed, and some media reports have overblown the potential importance of this discovery to climate science. (Climatide)