Snow, ice and heavy rain brought by the first major snowstorm of the 2019/20 season caused widespread disruption on the roads of southeastern France on November 14 and 15, 2019. At least one person has been killed and 300 000 customers left without electricity. Snow will not be as heavy today as it was yesterday, but traffic disruptions are likely through the rest of the day.

Reports mention many roads blocked and extremely slow movement on major routes throughout the Rhone-Alpes region on Thursday, November 14, with thousands of truck drivers stranded after A7 was closed for heavy goods vehicles.

Authorities have advised motorists to travel only if absolutely necessary.

Train traffic was also affected. Routes between Annecy, Grenoble and Velence were closed after several trees fell on tracks. Interruptions in and around Grenoble are expected to continue on Friday.

One driver was killed in Roche after he tried to remove fallen trees from icy roads while another tree fell on him. A person helping him was injured in the same incident.

According to energy provider Enedis, several power lines fell due to heavy snow, disrupting power to some 300 000 customers in the departments of Ardèche, Rhône, Isère and Drôme. About 25 residents were evacuated from their homes after one of the power lines fell onto homes in the village of Saint-Julien-en-Saint-Alban.

According to Météo France, not much snow is expected today, but many places are still heavily affected and travel disruptions are likely through the rest of the day.

Total rainfall accumulations equivalent to two weeks to one month of precipitation are forecast for Bouches-du-Rhône, Vaucluse and Var. Finally, wave-submersion phenomena are expected on the Var and Alpes-Maritimes coastlines. 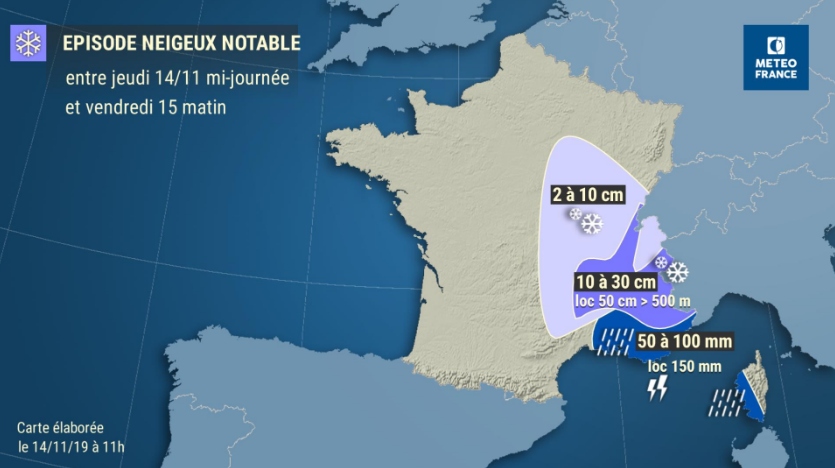 While this episode of heavy November snowfall is remarkable, it's not the first such event at this time of year, Meteo France said.