Tropical Storm "Kalmaegi," known as Ramon in the Philippines, has slowed down on Friday morning, November 15, 2019, as it continued heading towards Cagayan, Northern Luzon where it is expected to make landfall on November 17 or early November 18. However, the storm has already made locals feel its fury as rains, floods, and landslides hit provinces, particularly Quezon and Camarines Sur.

Footage posted by local broadcasting division GMA News showed locals holding on to each other as they braved the raging waters of a swollen river in General Luna. No injuries have been reported yet, but several residents have remained stranded and trapped.

At least 7 houses were buried along the Ragay Gulf, along the riverside of Zone 4 in Pasacao, Camarines Sur, as heavy rains triggered a landslide.

Residents in Camarines Sur have also posted videos and images on social media, showing the widespread flooding across the province.

Meanwhile, the Municipal Disaster Risk Reduction and Management Council (MDRRMC) has declared beaches in Baler, Aurora a "no outdoor activities zone", strictly prohibiting activities such as swimming, surfing, diving, snorkeling and all kinds of water sports. All tourism-related activities in Dilasag have also been halted.

LOOK: Local government of Dilasag in Aurora also suspend all tourism-related activities, coastal & outdoor activities in municipality due to #RamonPH | via @biancadava pic.twitter.com/Q1e8VXIuxa

According to PAGASA's severe weather bulletin issued at 11:00 LT (03:00 UTC) on November 15, light to moderate with intermittent heavy rains are expected in the eastern areas of Cagayan and Isabela, Bicol Region, Romblon, Panay Island, and Cuyo Islands.

Kalmaegi is expected to be in the vicinity of Santa Praxedes, Cagayan, on Monday morning, November 18.

On Wednesday morning, November 20, the storm is expected to be outside the Philippine Area of Responsibility (PAR), approximately 565 km (351 miles) west of Iba, Zambales. 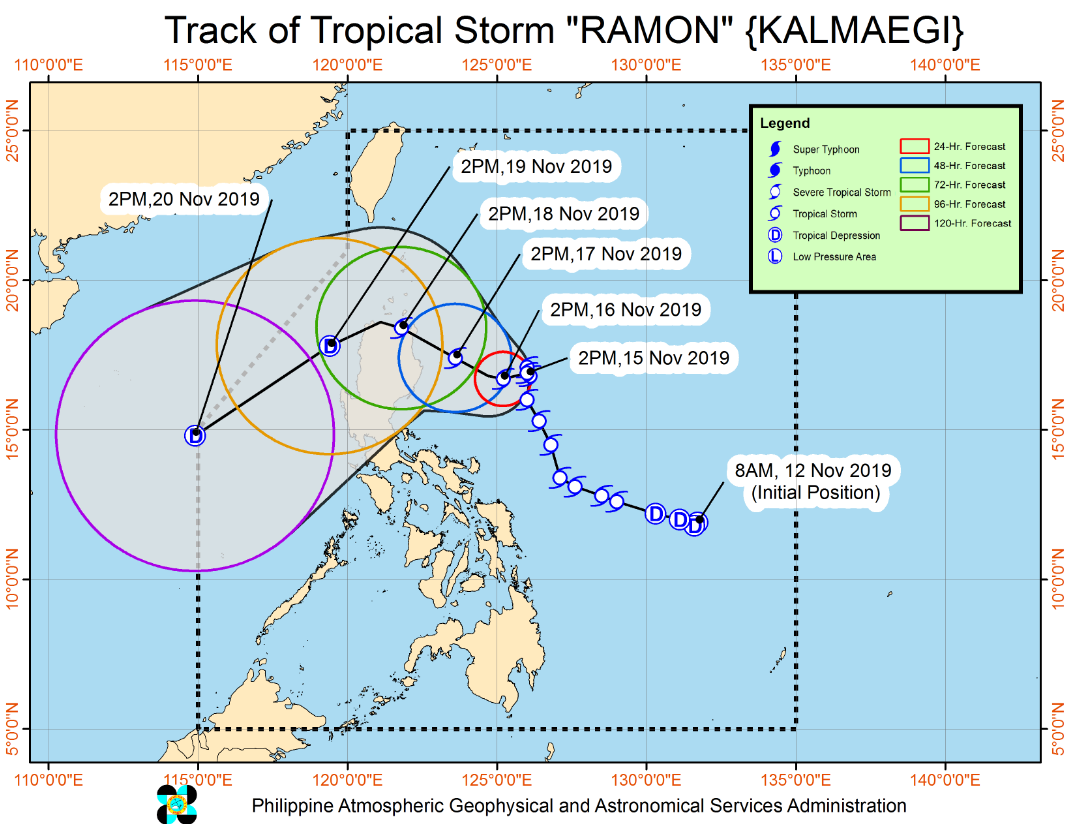