The southwestern area of Tobago island was extremely affected from September 21, after violent winds uprooted trees and knocked down power lines. These incidents were followed by power and telecommunication outages.

Officials were prompted to close roads and schools temporarily. Around nine shelters were prepared for affected families.

In the Plymouth area, rough waters damaged several boats and destroyed a jetty. It also resulted in high waves that flooded parts of the place.

This was the scene in Tobago after flood waters subsided in Scarborough. Cleanup efforts are underway. pic.twitter.com/Gz8w1yGBeZ

In Scarborough, at least one house was left in ruins while several people were stuck in their homes after the area experienced the worst flooding. "Scarborough and South Western Tobago experienced severe flooding, as well as power outages around the island," Tobago Emergency Management Agency (TEMA) stated on September 22.

The agency said they received 88 reports about storm-related emergencies. "These vary from blown off roofs, fallen trees, and utility poles in the roadway, flooding, strong winds and damage to residential and commercial properties."

Vehicles were swept away by waters. At least 25 places were flooded, according to the country's Office of Disaster Preparedness and Management.

There are numerous reports of flooding in Cocorite and Diego Martin. Motorists and pedestrians are advised to be extra vigioant.⚠ ⚠Please avoid intentionally driving or walking through flood waters. #ODPMTT pic.twitter.com/2xK2fDtLLC

National Security Minister Stuart Young reported the risk of riverine flooding, confirming that the Met Office raised it to red alert. "We are no longer under a threat of Tropical Storm 'Karen' but right now what we’re facing is a red level warning to riverine flooding," he said.

The minister warned citizens to be extra cautious, saying "there has been a rise in our river levels. Due to the continued rainfall we have experienced, what will happen is we will continue monitoring but we suspect flooding and rivers would have broken their banks."

Young explained that further rainfall is expected, leading them to carry up the warning to a red level.

Karen is expected to make landfall in Puerto Rico and the U.S and the British Virgin Islands on September 24. 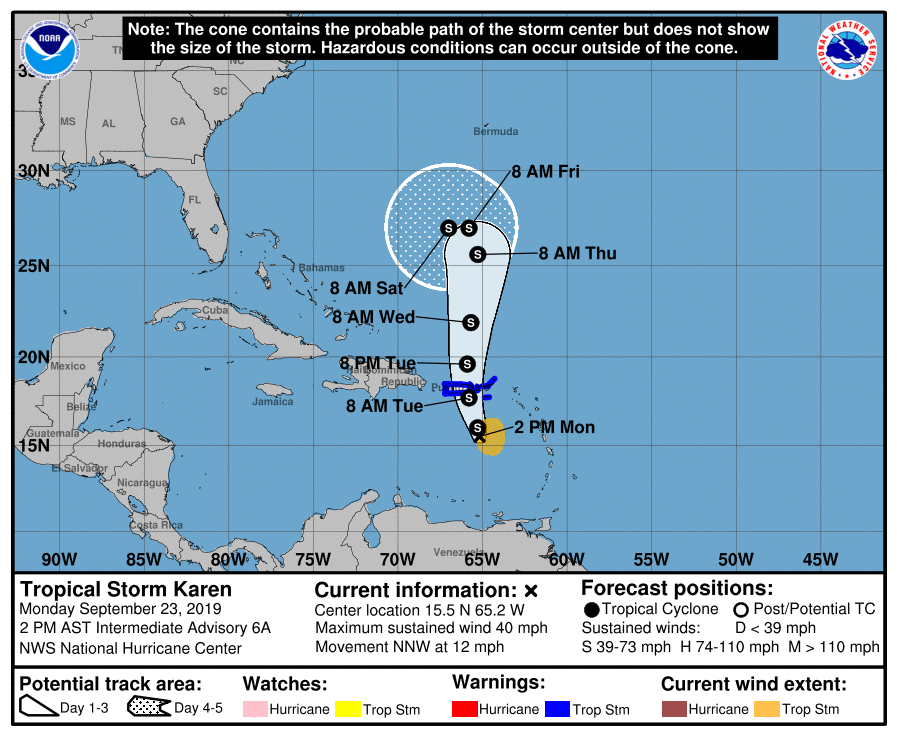 At 18:00 UTC, Karen was barely hanging as a tropical cyclone, NHC said. However, it is still expected to bring heavy rainfall to Puerto Rico and the Virgin Islands.

Karen could weaken to a tropical depression or degenerate into an open wave later today or tonight, however, little overall change in wind speed is expected over the next day or so.