The Vanuatu Meteorology and Geo-Hazards Department has raised the Volcanic Alert Level for Ambrym volcano to Level 3, the department reported December 15, 2018. The eruption is taking place in the caldera area and the Danger Zone for life safety is limited at the Danger Zone B which is about 2 km (1.2 miles) around Benbow and 4 km (2.5 miles) around Marum craters (including Maben-Mbwelesu, Niri-Mbwelesu and Mbwelesu).

VMGD said that the possibility for Ambrym volcano activity to escalate to the level of a moderate eruption (Level 4) is low for now.

The Alert Level for Ambrym volcano has been at the Level 2 since December 7, 2017. 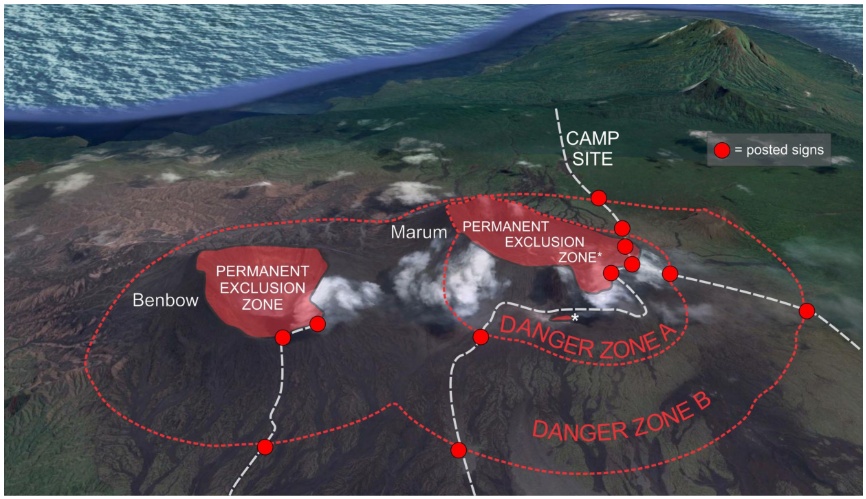 Ambrym volcano is a very active volcano in Vanuatu with large caldera of 12 km (7.4 miles) in diameter and 2 active craters Marum and Benbow. The volcano has been active during historical time at both summit and flank vents, producing moderate explosive eruptions and lava flows that have reached the coast. The larger events include eruptions in 1820, 1894, 1913 or 1929. Over the last seventy years, there are no extra-caldera eruptions. The eruption of 1988, 2015 and now are focused in the caldera.

All tourism agencies, local authorities, people of Ambrym and the general public are reminded not to access the Danger Zone B which is about 2 km radius from Benbow and 4 km from Marum. In this area volcanic ashes and gases may be unbearable. Villages of Ambrym may experience impacts of ash and gas plumes and acid rains, especially those exposed to prevailing trade winds direction.