At least 81 people have been killed, 253 injured and 246 842 displaced as Enawo, the third strongest cyclone to hit Madagascar, hit the island on March 7, 2017. Towns and cities were flooded, houses, schools, hospitals and critical infrastructure destroyed. Water and power outages are widespread in affected areas.

Slow-moving Enawo hit the country as Category 4 hurricane equivalent at 08:00 UTC (11:00 local time) on Tuesday, March 7, about half way between Sambava and Antalaha. As it hit, Enawo became quasi-stationary and pounded Antalaha with strong winds and heavy rain for several hours.

The tropical cyclone dropped the highest rainfall totals of over 500 mm (almost 20 inches) in the open waters of the Indian Ocean northeast of Madagascar.

Madagascar was expected to receive between 700 and 900 mm (27 and 36 inches) of rain this week, which will come as a blessing to some as the country suffers from severe and chronic drought, particularly in the south of the country. More than 850 000 people are severely food insecure.

UNOCHA and the Government of Madagascar reported March 9 that the northeastern Sava region has sustained significant damage to housing and agriculture.

Antalaha port is inaccessible and more than half of the city’s homes have been destroyed, with northern areas particularly affected. Farahalana commune is flooded by Lohoko River, with half of all housing under water. Farms along the famous Vanilla Coast have been hard hit, while rice fields in Antalaha and Sambava are submerged.

Carcasses of migratory birds have washed up on the shores of Fenerive Est in the Analanjirofo region, where more than 10 000 people are displaced. Two school buildings have collapsed, an airport road blocked, and more than 500 houses flooded in the districts of Mananara Nord, Maroantsetra, Vavatenina and Soanierana Ivongo. Flood waters in Maroantsetra have attained a height of four meters (13 feet).

The Malagasy Red Cross reports that evacuations are underway in the flood-affected cities of Brickaville and Toamasina I & II in Antsinanana region.

Deadly flooding from #Enawo maximized due to post landfall turn per MIMIC track showing west then south path down the length of #Madagascar. pic.twitter.com/oQZchcksHH

PHOTOS: See damage left by Cyclone #Enawo in NE #Madagascar, from our partner @CAREMadagascar. @USAID staff is on the ground & ready to help pic.twitter.com/bJw0mqYDaR

At midday local time on Wednesday, the eye of the cyclone was situated in the Tsaratanana district in Betsiboka region, and was moving South-Southwest, approaching the capital Antananarivo. Flooding and water stagnation for days on end in Antananarivo, where more than a million people live, could lead to outbreaks of life-threatening waterborne diseases, UNOCHA said. 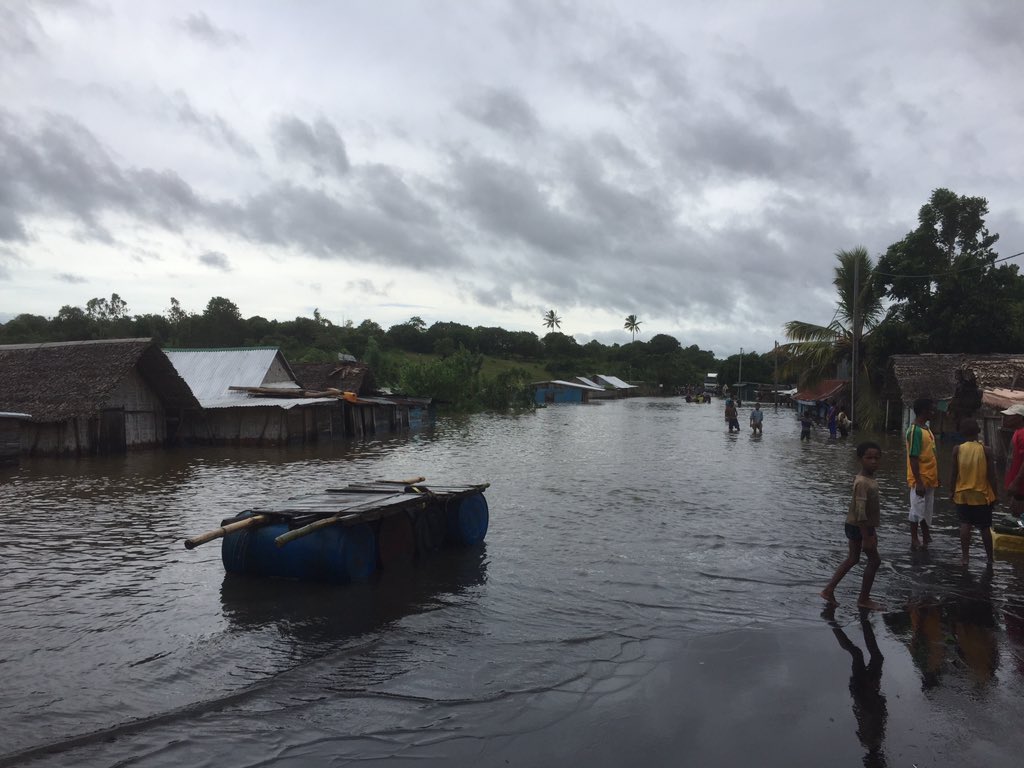 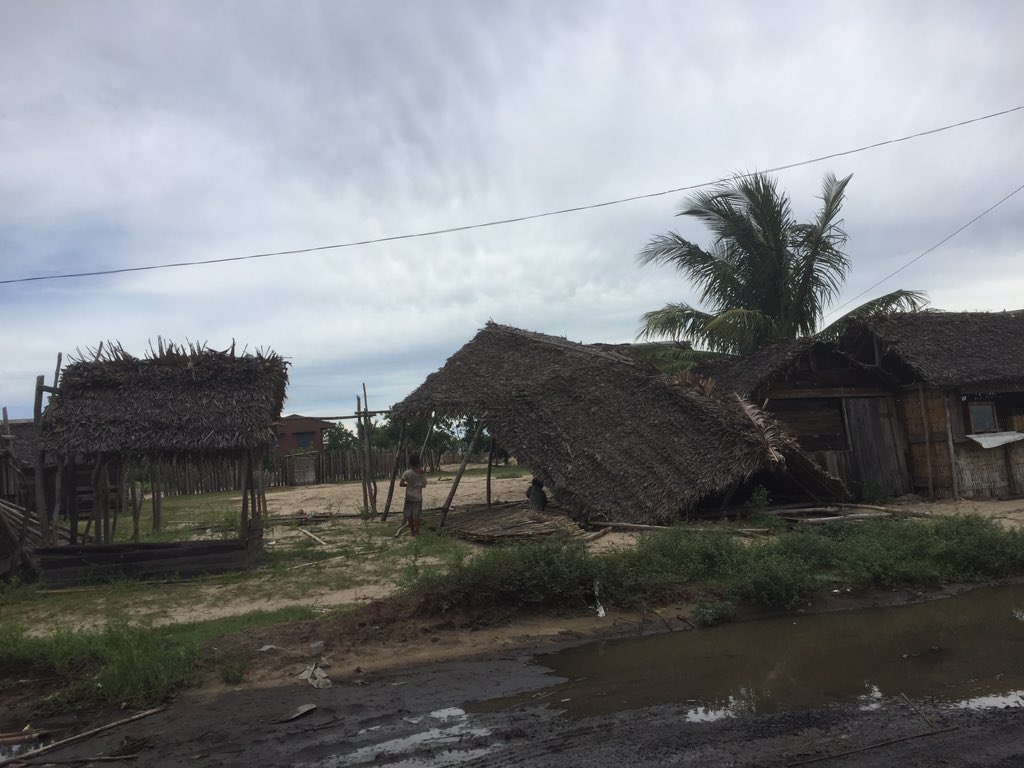 Ministry of Education said that three students were killed, two schools were damaged while 11 others were flooded.

All schools were closed on Wednesday and Thursday in the country but students will resume courses on Friday, the communication office of the Ministry of Education said. 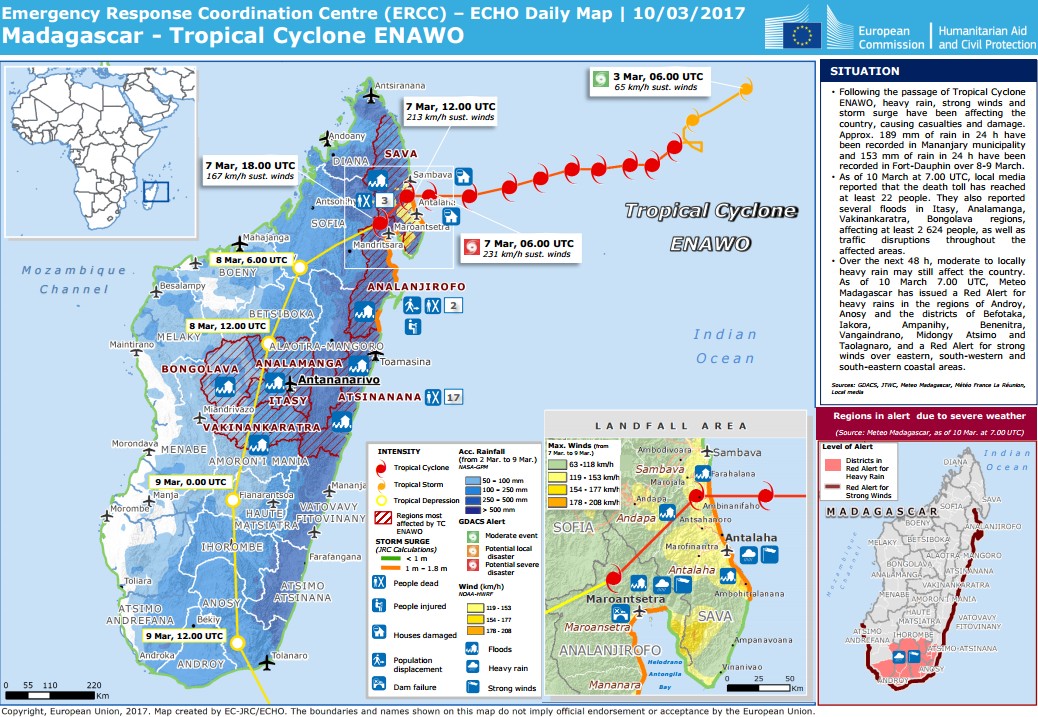 250 000 were displaced from their homes, 18 are listed as missing and 250 as injured, the National Bureau for Risk and Catastrophe Management (BNGRC) said in a statement.

According to national authorities, over 433 000 people have been affected with 81 deaths, 253 injured, 246 842 people displaced, of which 5 194 currently homeless, 83 100 damaged houses, 58 affected districts. Towns and cities were flooded, houses, schools and critical infrastructure destroyed. There is a heavy damage to crops and food reserves, with a continued risk of flooding and landslides.

On March 13, authorities issued a "declaration of national emergency" and requested assistance from national and international partners. A cargo transporting 92 tonnes of aid from several UN agencies landed in Madagascar but access to the affected areas remains a major challenge. Logistics, shelter, health, food and NFIs are urgently needed.