According to local police reports, the tornado destroyed a lot in the Unterfrische Kürnach near Würzburg, some 20 to 30 roofs were damaged and at least two trees uprooted. Nobody was hurt. 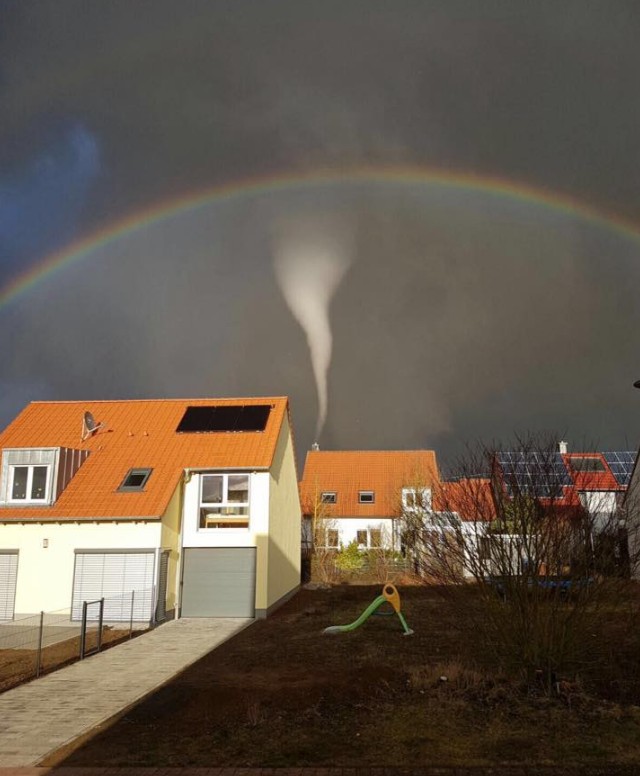 The thunderstorm that produced it developed during the afternoon hours in the Main-Kinzig circle in Hesse and then moved on in the direction of Würzburg. It was a single small cell that later produced the tornado near Würzburg.

German Meteorological Service said it was not unexpected, but not very likely as tornadoes are not unusual at this time of the year. It is a bit early for them, but not unheard of.

The tornado season in Europe is mostly from May to August, when 66.4% of the 5 460 tornado reports that included information on the occurrence month were reported, with a peak in July. Tornadoes occur more frequently during autumn and early winter over southern Europe, which reflects the occurrence of waterspouts in the Mediterranean Sea. (Antonsecu et al. 2016).

If you liked this one, you might wanna take a look at the twins that formed on June 5, 2016 in northern Germany and later joined into one:

You can read more about that event, here.

Featured image: Damage caused by a tornado in the Unterfrische Kürnach near Würzburg, Germany on March 9, 2017. Credit: Unwetteralarm