A new research paper warns that although tornadoes in Europe cause injuries, fatalities, and damages, their threat is not widely recognized and is underestimated. To increase awareness of tornadoes and their threat to the continent, authors of the paper propose a strategy that includes a collaboration between meteorological services and development of national forecasting and warning systems.

A team of researchers led by Bogdan Antonescu and David M. Schult analyzed the social and economical impact of tornadoes in Europe using reports from the European Severe Weather Database (ESWD) between 1950 and 2015.

Although the reported frequencies and intensities of tornadoes in Europe are lower compared with the United States, tornadoes do occur in Europe and they are associated with injuries, fatalities and damages. 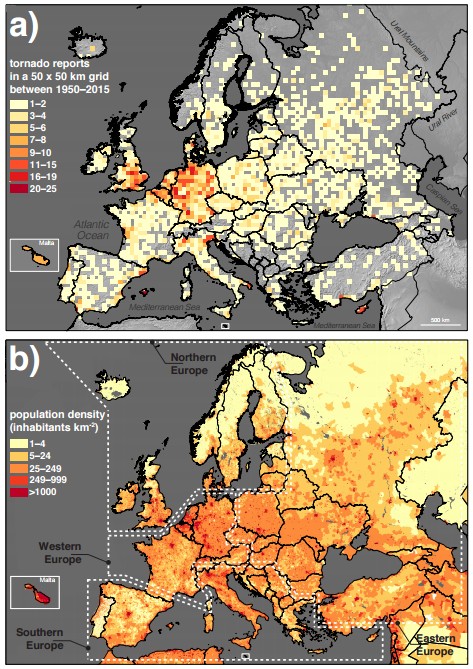 a) The spatial distribution of tornado reports (tornadoes per 10,000 km2 ) in Europe in between 1950–2015 on a 50 km x 50 km grid, shaded according to the scale. b) The population density (inhabitants km−2) estimated for 2015, shaded according to the scale. The population density was obtained from NASA Socioeconomic Data and Applications Center (SEDAC) (2016). The four main regions of Europe are also indicated (dashed lines). Credit:

The paper summarizes our current understanding of the tornado threat to Europe by showing the changes in tornado injuries and fatalities since the 1950s and by estimating for the first time the damages associated with European tornadoes.

"There was a time when tornado research in Europe was more active than in the United States. Before the beginning of the Second World War, European scientists and meteorologists were actively researching tornadoes, while the word “tornado” was banned by the United States Weather Bureau. This situation changed after 1950, driven by the tornado forecast advances of Miller and Fawbush," the authors write.

The interest in European tornadoes declined after 1950, with the majority of the efforts of collecting tornado reports occurring outside the national meteorological services.

The lack of national databases resulted in an underestimate of the tornado threat to Europe. A situation which, sadly, persists to this day despite the rising interest in recent years.

In 2015, 206 tornadoes were reported in Europe versus 1 177 tornadoes in the United States. The lower number of tornadoes in Europe is likely the reason why tornadoes are not a well-established subject of research in Europe and are not a priority for European meteorological services. 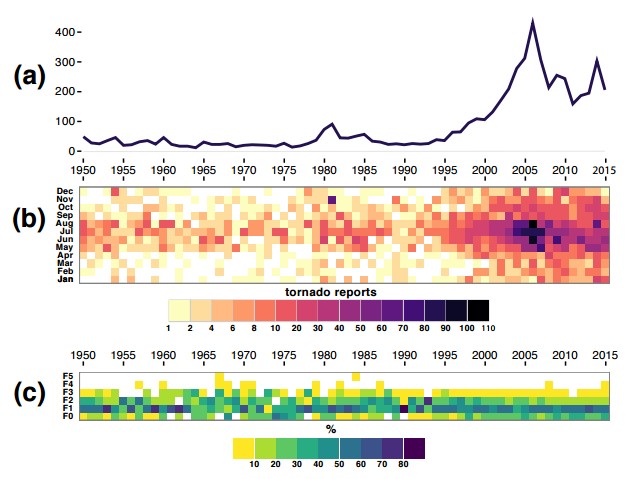 Between 1950 and 2015, 5 478 tornadoes have been reported in 42 European countries. Approximately 33% of all reports are for tornadoes that have occurred over central and western Europe (i.e., United Kingdom, Belgium, the Netherlands, Germany, Denmark and the Czech Republic).

Over continental Europe, the highest density of tornado reports is over Belgium, Germany and the Netherlands.

This high density of reports is likely due to the high population density over western and central Europe compared with other regions of Europe in combination with favorable environments for deep, moist convection. 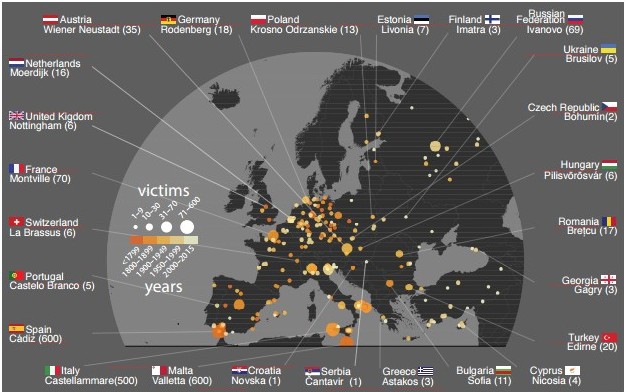 Deadly European tornadoes between 1091 and 2015. The number of fatalities is represented by varying the size of the circle (according to the scale) and the period when the tornado occurred by changing the fill color (shaded according to the scale). For each country, the deadliest tornado is indicated on the sides by showing the tornado location and the number of fatalities in parentheses. The high-impact tornadoes over Malta (1556, de Boisgelin de Kerdu 1804), Spain (1671, Gaya 2015), and Italy (1851, ` Illustrated London News 1851) were documented from secondary sources which can result in over or underestimation of the number of fatalities. Credit:

The highest tornado density over southern Europe is over Malta and Cyprus, two island countries in the Mediterranean Sea, and also over Mallorca, the largest island in the Balearic Islands archipelago, which are a part of Spain.

Relatively few tornadoes were reported in eastern Europe between the end of the Second World War and the fall of the Iron Curtain in 1989. During this period, any observations of tornadoes were considered erroneous observations or they were described as high-wind events, which resulted in an underestimate of the tornado threat.

The mean annual number of tornado reports in Europe between 1950 – 2015 was 83 tornadoes per year, approximately eleven times lower compared to the annual mean for the United States during the same period.

The tornado season in Europe is mostly from May to August, when 66.4% of the 5 460 tornado reports that included information on the occurrence month were reported, with a peak in July.

But, the tornado season varies across Europe, with tornadoes over eastern Europe reported more frequently during the spring and early summer, over western Europe during the summer and over northern Europe from mid- to late summer.

Tornadoes occur more frequently during autumn and early winter over southern Europe, which reflects the occurrence of waterspouts in the Mediterranean Sea.

Tornado in Schleswig-Holstein, Germany on June 5, 2016

To increase awareness of tornadoes and their threat to Europe, the authors propose a strategy that includes:

1) collaboration between meteorological services, researchers and the general public toward a pan-European database,

2) development of national forecasting and warning systems and of pan-European convective outlooks, and

3) development by decision-makers and emergency managers of policies and strategies that include tornadoes.

Large waterspout in the Gulf of Valencia, Spain on November 27, 2016