A destructive tornado swept through Columbus, Mississippi around 17:00 CST on Saturday, February 23, 2019, killing at least one person and injuring 6.

Most of the damage is on the north side of town at Garden Blvd, Military Road, and 14th and 15th street. NWS Jackson, MS said the tornado was confirmed on radar, adding that experts would be headed to Columbus (population 23 000) on Sunday.

The twister hit near the downtown area, heavily damaging businesses in the city's commercial district, downing trees and causing power outages. According to radar data, debris lofted nearly 3 km (10 000 feet) into the air.

Multiple power outages have been reported across the city, and hospital and the county 911 center are working on generators, Dillon said.

According to unofficial reports, at least one person has been killed and 6 injured.

A tornado has also been confirmed in the town of Burnsville. No injuries were reported, but nine homes had structural damage as crews work to clean up the mess that was left.

MEMA is assisting Lowndes County Emergency Management with initial damage assessments and resource coordination in response to today's tornado in Columbus. We will provide more information as we receive it. (Photo courtesy of Trevor Birchett) #MSWX #ColumbusTornado pic.twitter.com/J3tI1Im3e8

Strong tornado crossing US 72 near Burnsville about 7 minutes ago seen from UAH M3V @NWSMemphis pic.twitter.com/5Alu62VhXy

Before the storms hit, the NWS Storm Prediction Center issued a moderate risk for severe thunderstorms over northern Mississippi and into southwestern Tennessee – the first moderate risk issued by the agency since July 2018. 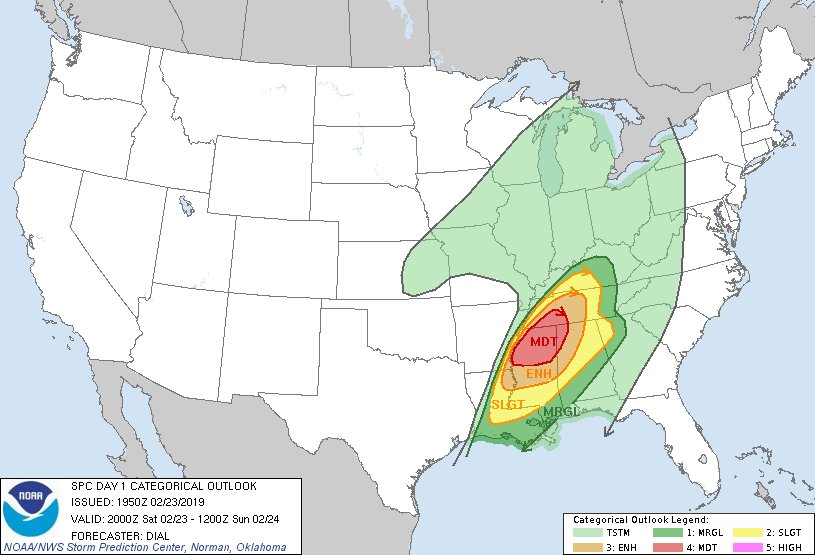 A 41-year-old Ashley Pounds was killed when a building collapsed on her and three other people. She was taken to a local hospital where she died in surgery, according to a statement released by Mayor Robert Smith.

A dozen other people sustained injuries but were not hospitalized.