A process in which the warm Gulf Stream water and colder water of the continental shelf exchange has been studied in previously unknown details by examining data gathered by ocean robots installed off the coast of Massachusetts. Scientists from Woods Hole Oceanographic Institution (WHOI) published their research in Geophysical Research Letters on September 30, 2015.

The process of water exchange happens when offshore waters from the tropics intrude the Mid-Atlantic Bight shelf and meet the waters originating in the Arctic region. The process strongly affects shelf circulation, biogeochemistry and fisheries.

The scientists have first observed an elongated body of warm water from a Gulf Stream intruding along the shelf edge, in 2006, extending hundreds of kilometers (miles) from Massachusetts towards Cape Hatteras, NC. 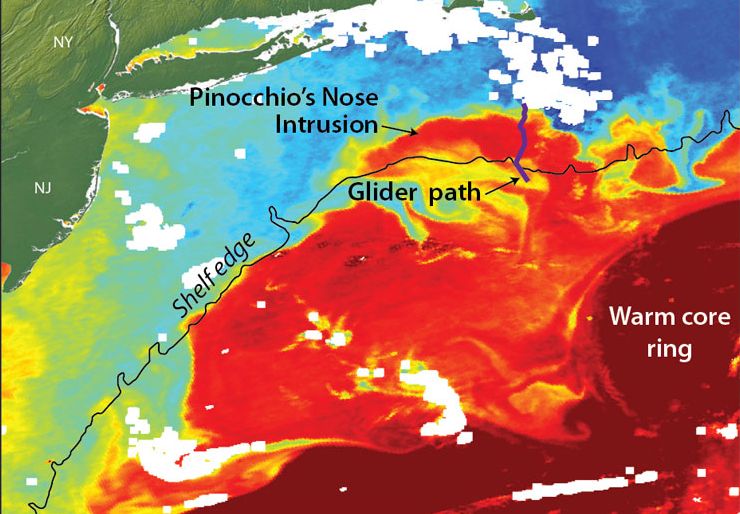 “A lot of people were surprised by this. Normally, the Gulf Stream water, which is very warm and buoyant, doesn't come in direct contact with the water on the continental shelf, which is much colder. There is a cascade of potential implications that need further study,” said Weifeng ‘Gordon’ Zhang, associate scientist at Woods Hole Oceanographic Institution (WHOI), and lead author of the study. 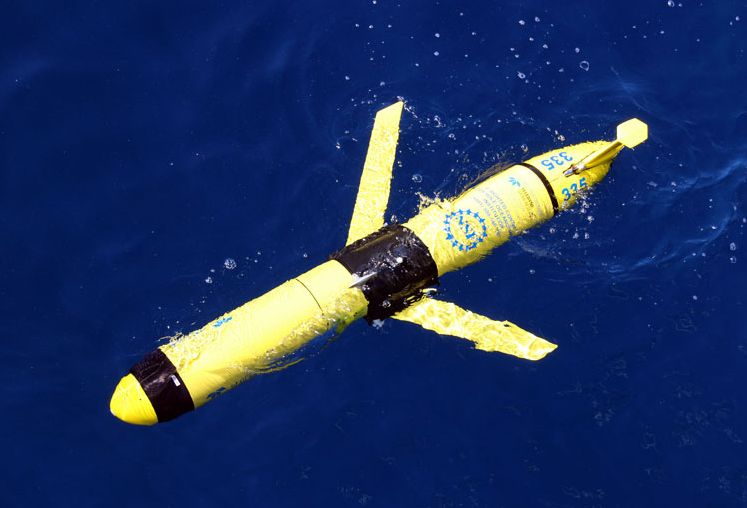 This phenomena was poorly studied this far, as the scientists were only able to use satellite measurements, which couldn't deliver data on the structure of the intrusion water below the surface level. During April 2014, water column data from the area became available from preliminary deployments from the National Science Foundation-funded Ocean Observatories Initiative (OOI).

Scientists used preliminary glider data, collected from April to June 2014, to create the first profile of the complex, layered water mass of this particularly important point in the ocean. 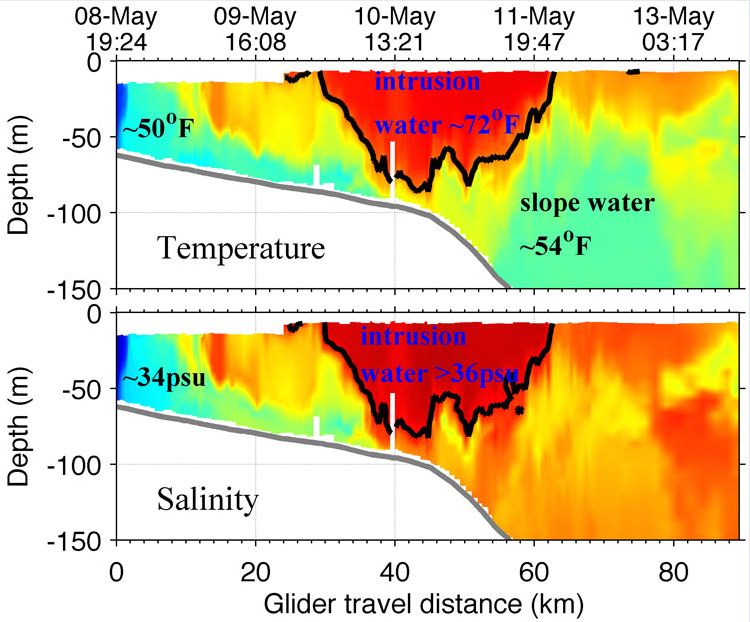 This cross-section of the continental shelf shows the structure – temperature and salinity – of the masses of water at this critical point in the ocean. Image credit: Weifeng 'Gordon' Zhang, Woods Hole Oceanographic Institution

“The edge of the continental shelf is a key location where dense, nutrient rich water ‘upwells’ to the surface, stimulating growth at the base of the food web. This water is normally sandwiched between colder, fresher water on the shelf and warmer Gulf Stream waters offshore. Understanding changes in this region has important societal and economic implications,” said co-author Glen Gawarkiewicz, a senior scientist at WHOI.

Five similar-looking events occurred in the spring seasons between 2007 and 2014 period. Scientists have labeled the events "Pinocchio's Nose Intrusions (PNI)", as the warm water intrudes onto the shelf and continues to "grow" for hundreds of kilometers (miles) in the opposite direction of the Gulf Stream, moving toward northeast.

Before this new research was conducted, it was generally considered the warm water were swept up in the shelf break jet current. This is where the intrusion got its name from, as Zhnag has called this behavior "the deception or lie" of the Pinocchio's Nose Intrusion (PNI).

“If the intrusion was caused by the shelfbreak jet, this feature would most likely be a very thin, superficial feature on the surface,” Zhang explained.

Data collected from the gliders, on the other hand showed these intrusions are about 100 m (328 feet) deep, almost reaching the seafloor. 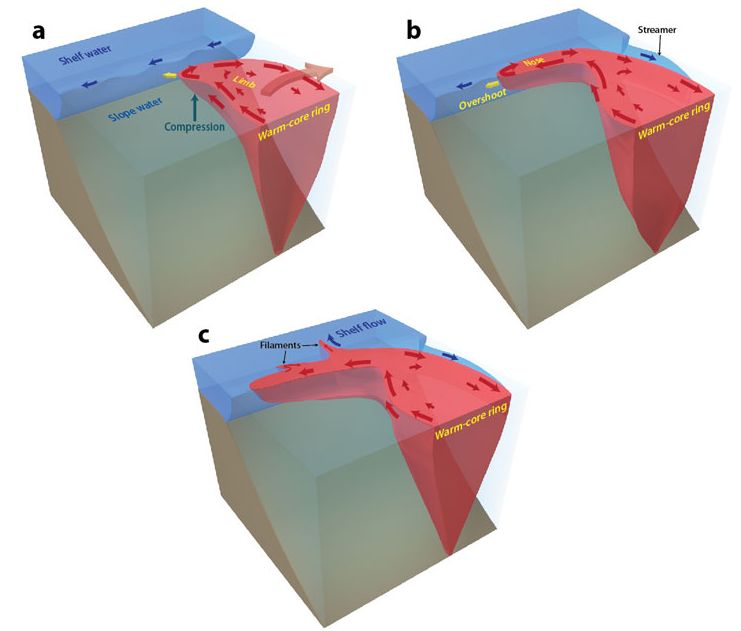 Rotating warm core rings form in the deep ocean and eventually pinch off from the Gulf Stream, heading in a northwest direction onto the shallower continental slope. The outer limbs of the rings hit the slope first, and are squeezed by the rising sea floor. Once reaching the shelf, they follow the shelf edge extending to the southwest forming the long nose shape. Eventually, the extension stops, and thin filaments coming out of the north side of the nose penetrate further onto the shelf. Image credit: Jack Cook, WHOI

Rotating warm core rings form in the deep ocean and eventually pinch off from the Gulf Stream, heading in a northwest direction onto the shallower continental slope. The outer limbs of the rings hit the slope first, and are squeezed by the rising sea floor. Once reaching the shelf, they follow the shelf edge extending to the southwest forming the long nose shape. Eventually, the extension stops, and thin filaments coming out of the north side of the nose penetrate further onto the shelf.

New data also unveiled some of the complexities behind the question on what is the driving force behind the density of various water masses at this unique location. Under normal conditions, the density in the region is controlled by the salinity. The shelf water is fresher and more buoyant than the offshore water. However, in a PNI event, the shelf water becomes less buoyant due to a large difference in temperature, in the range of 14 to 17 °C (25 to 30 °F),  between the shelf waters and the intrusion water.

“Because the Gulf Stream water is so outrageously warm, density now is controlled by the temperature, and the intrusion water is more buoyant, despite being saltier,” said Zhang.

The changes in temperature, density and circulation all have major implications for the fisheries in the area.

“I showed the glider data to a group of commercial fisherman back in April, in Rhode Island, and they were very surprised,” said Gawarkiewicz. “They couldn’t believe the temperature can change by that much, that quickly.”

Researchers think the PNI process could support the young fish transport across the shelfbreak barrier and onto the shelf, where they can swim toward coastal estuaries. This process is very significant for the population of America eel, as baby eels have to make it all the way from the tropics to their estuarine and freshwater habitats on the US northeast coast in their first year. The direct intrusion of the Gulf Stream water can help them reach their destination, and therefore significantly increase their survival rate.

On the other hand, other species might find it hard to cope with the low nutrient Gulf Stream surface water and the intrusion could reduce biological productivity in this region, otherwise known as fertile fishing grounds.

“I just find it extraordinary that the Pioneer Array gliders were out for a month, and we have already identified a new shelf break exchange process,” said Gawarkiewicz. “It just goes to show how much more we have to learn in the shelf-wide ecosystem.”

“I am very proud of our WHOI scientists, Weifeng Zhang and Glen Gawarkiewicz,” said Representative William Keating (D-MA). “Their discovery serves as a reminder of the critical need for continued and more frequent ocean observation, as well as the interconnectedness of the health of our oceans and the health of our marine ecosystems. WHOI has long been an international leader in oceanography, with groundbreaking research unveiling countless discoveries that have changed the field. This breakthrough is no different. As we continue to study and understand the magnitude and impacts of the changes of ocean temperatures and circulation, WHOI’s research and resources will be invaluable.”