According to the newest study, conducted by the scientists from the University of Washington, the Atlantic overturning circulation, responsible for mild climate conditions over England, is currently slowing down, a shift likely to have consequences for the climates of eastern North America and Western Europe. The shift appears to be connected to changes spotted in the southern hemisphere, rather than ice melting in the North Atlantic, as previously assumed.

The scientists utilized the data from satellites and ocean sensors off Miami, that followed the changes in the ocean circulation for more than a decade. The data shows a slowdown definitely occurred since 2004, which confirmed a previously suspected trend.

The scientists have long suspected the changes in salinity to be the leading cause of the slowdown. The abundant melting and freshening reported in the North Atlantic has been thought to stop the water from sinking, thus slowing down the overturning circulation and moving warmer water masses north along the surface, while sinking the cold water southward. However, the new discovery has come as a surprise, as the previous main suspect was ruled out. 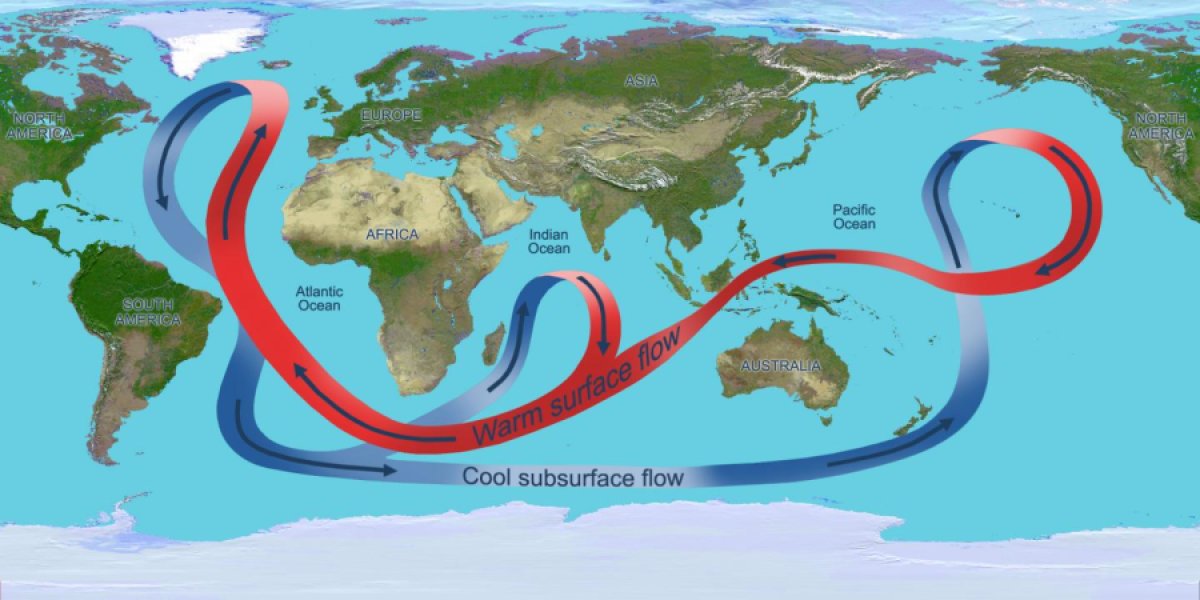 A depiction of the global ocean circulation. The warm water In the Atlantic Ocean travels north at the surface and cooler water travel south at depths. Image credit: NASA

"It appears that this 10-year slowdown is not related to salinity," said Kathryn Kelly, an oceanographer at the UW's Applied Physics Laboratory. Despite the meltdown, less precipitation contributes to the Arctic surface water becoming saltier and more dense. "That means the slowdown could not possibly be due to salinity – it's just backwards. The North Atlantic has actually been getting saltier."

The scientists noted a connection with the so-called Agulhas Current around the southern tip of South Africa where the warm water from the Indian Ocean flows south along the coast of the continent and around its tip toward the Atlantic, making a sharp turn back and connecting with the stormy southern circumpolar current. The warm water mass entering the Atlantic around the cape of South Africa is called the Agulhas Leakage. According to the research, the amount of leakage changes with the quantity of northward transported heat, immersed in the overturning circulation.

“We’ve found that the two are connected, but I don’t think we’ve found that one causes the other. It’s more likely that whatever changed the Agulhas changed the whole system. Most people have thought this current should be driven by a salinity change, but maybe it’s the [Southern Ocean] winds,” explained Kelly. 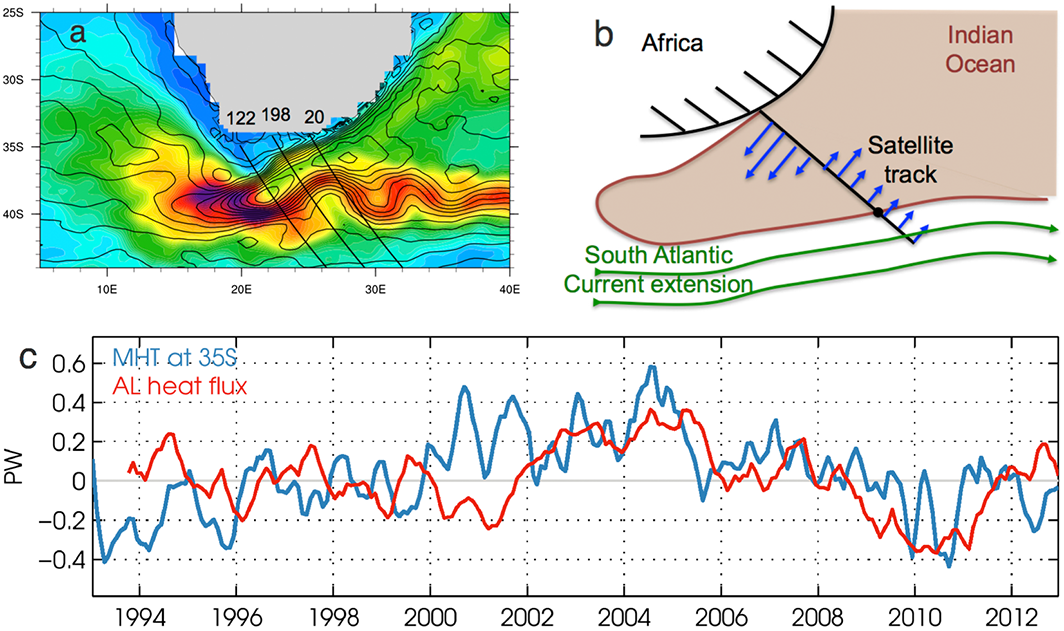 Warm water traveling westward around the tip of South Africa and then reversing eastward (top left). The direction of currents along a satellite track (top right). Measurements of heat moved north by the Atlantic overturning circulation (blue line) compared with the amount of heat transferred around the tip through the Agulhas Leakage (red line). Image credit: Kathryn Kelly/University of Washington

The new discovery likely carries implications for the climates of northern Europe and eastern portions of the US, and also impacts our understanding of how the oceans transport the heat from tropics to the poles of the planet.

“I think it changes how we think about the whole Atlantic overturning circulation, of which the Gulf Stream is a part. It brings back the role of the atmosphere into what’s controlling the climate in the high latitudes, that it’s not all driven by what’s happening in the oceans,” said LuAnne Thompson, a UW professor of oceanography.

The observed slowdown of the Gulf Stream and overturning circulation would cause less warm water to be transported to eastern North America and Western Europe, but any effects would be overwhelmed by the overall global climate warming. Thus, the change would not be as dramatic as depicted in the 2004 movie "The Day After Tomorrow, but very gradual.

“So that whole concept in the movie of New York harbor freezing doesn’t make any sense. If the Gulf Stream doesn’t carry as much heat from the tropics, it just means that the North Atlantic is not going to warm up as fast as the rest of the ocean – it’s not going to cool down,” Kelly concluded.

Featured image: Measurements of heat moved north by the Atlantic overturning circulation (blue line) compared with the amount of heat transferred around the tip through the Agulhas Leakage (red line). Image credit: Kathryn Kelly/University of Washington