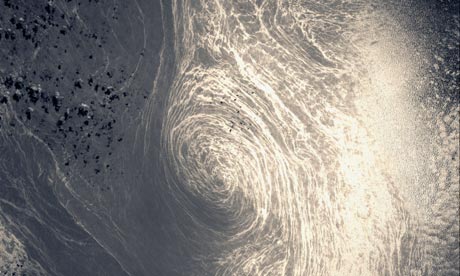 The Gulf Stream and North Atlantic Drift – which are part of the Atlantic thermohaline circulation – bring warm water, and with it warm air, from the tropical Atlantic to northern Europe. This helps keep Europe several degrees warmer than it would otherwise be.

Although this system is unlikely to pack up entirely, the IPCC deems a slowdown of it “very likely” over the next century. The reason is that increasing rainfall and snow-melt across the Arctic and nearby land areas could send more freshwater into the north Atlantic, pinching off part of the warm current. The best guess from the most sophisticated computer models is that the circulation might slow by 10% to 50% over the next century, if greenhouse gas emissions continue unabated. If this happens, the expected climate warming might be nearly erased across the United Kingdom and diminished across many other parts of Europe. However, summers could still be warmer and more drought-prone across the Europe than they are now.

In any case, the impacts would be much smaller – and would take much longer to play out – than the scenario dramatised in the film The Day After Tomorrow. Although evidence shows that the thermohaline circulation has ground to a halt more than once in climate history, it’s believed that this process takes at least a few years to play out, and sometimes many decades, rather than the few days portrayed in the film.

For all you watchers that are interested in more in Gulf stream anomalies and possible scenarios regarding the abruption of stream watch for upcoming post about Gulf stream soon!

The Rough Guide to Climate Change by Robert Henson 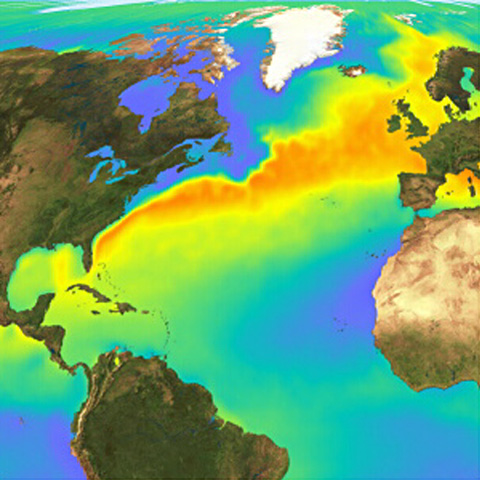 Beginning in the Caribbean and ending in the northern North Atlantic, the Gulf Stream System is one of the world’s most intensely studied current systems. This extensive western boundary current plays an important role in the poleward transfer of heat and salt and serves to warm the European subcontinent. Traditional hydrographic studies in this region include those of Iselin (1936) and Gulf Stream ’60 (Fuglister 1963). The high degree of mesoscale activity associated with this system also has attracted oceanographers. Studies of these phenomena have focused on the “snapshot” representation of the region and have included studies such as SYNOP, Gusto, and ABCE/SME. The Gulf Stream system is powerful enough to be readily seen from space and was visible in even the earliest satellite altimetry studies, such as Seasat and later Geosat. Strong thermal gradients also made it visible to infrared measurements, like VHRR (Very High Resolution Radiometer) readings using the early NOAA satellites, THIR (Temperature and Humidity Infrared Radiometer) readings from Nimbus satellites, and Advanced VHRR (AVHRR) readings from later NOAA satellites.

The Gulf Stream begins upstream of Cape Hatteras, where the Florida Current ceases to follow the continental shelf. The position of the Stream as it leaves the coast changes throughout the year. In the fall, it shifts north, while in the winter and early spring it shifts south (Auer 1987; Kelly and Gille 1990; Frankignoul et al. 2001). Compared with the width of the current (about 100-200 km), the range of this variation (30-40 km) is relatively small (Hogg and Johns 1995). However, recent studies by Mariano et al. (2002) suggests that the meridional range of the annual variation in stream path may be closer to 100 km. Other characteristics of the current are more variable. Significant changes in its transport, meandering, and structure can be observed through many time scales as it travels northeast.

The Gulf Stream transport varies not only in space, but also in time. According to Geosat altimetry results, the current transports a maximum amount of water in the fall and a minimum in the spring, in phase with the north-south shifts of the its position (Kelly and Gille 1990; Zlotnicki 1991; Kelly 1991; Hogg and Johns 1995). Rossby and Rago (1985) and Fu et al. (1987) obtained similar results when they looked at sea level differences across the Stream. All of these studies found that the Gulf Stream has a marked seasonal variability, with peak-to-peak amplitude in sea surface height of 10-15 cm. The fluctuation is mostly confined to the upper 200-300 m of the water column and is a result of seasonal heating and expansion of the surface waters (Hogg and Johns 1995). Height differences this small, if assumed to decay linearly to zero at 300 m, would only result in annual transport fluctuations of about 1.5 Sv (Hogg and Johns 1995).

Interestingly, the variations in transport of the deep waters in the current appear to be almost opposite in phase to the surface waters, and their magnitude is more significant (Hogg and Johns 1995). As Worthington (1976) suggested, the maximum transport occurs in the spring, and the amplitude of the annual cycle is as large as 5-8.5 Sv (Manning and Watts 1989; Sato and Rossby 1992; Hogg and Johns 1995). The mechanism Worthington proposed was extensive convection south of the Gulf Stream in winter due to the atmospheric cooling of surface waters. This causes the thermocline to deepen and the baroclinic transport to increase (Fu et al. 1987). Although his idea has been controversial, alternate hypotheses have not adequately explained observations (Hogg and Johns 1995).

Like transport, the meandering of the Gulf Stream intensifies downstream of Cape Hatteras, reaching a maximum near 65°W. Meanders often pinch off from the current to form Gulf Stream rings. On average, the Stream sheds 22 warm-core rings and 35 cold-core rings per year (Hogg and Johns 1995).

Once it reaches the Grand Banks, the structure of the Gulf Stream changes from a single, meandering front to multiple, branching fronts (Krauss 1986; Johns et al. 1995). Early oceanographic papers on the North Atlantic (Iselin 1936; Fuglister 1951a, 1951b; Sverdrup et al. 1942) mention the branching, but due to sparse data in this area, the branch points were considered largely theoretical until confirmed by Mann (1967). Mann (1967) showed two branches at 38°30;N 44°W. One branch curves north along the continental slope, eventually turning east between 50° and 52°N. This branch is called the North Atlantic Current and was well known even in Iselin’s time. The other branch flows southeastward towards the Mid-Atlantic Ridge and is called the Azores Current. This southern branch is most likely synonymous with Iselin’s “Atlantic Current” and was formally named the Azores Current in a paper by Gould (1985).

The region of the Gulf Stream’s branch point is highly dynamic and subject to rapid change. The high degree of mesoscale activity, along with rapid changes in the major surface currents, make this a very difficult region to study. Part of this variability arises from the high amount of eddy activity. Eddy kinetic energy along both the Gulf Stream and the North Atlantic Current is at peak values here (Richardson 1983). There is also the presence of elongated, high-pressure cells along the offshore side of the North Atlantic Current (Worthington 1976; Clarke et al. 1980; Baranov and Ginkul 1984; Krauss et al. 1987). These pressure cells may be linked to outbursts of Labrador Current water from the Grand Banks (Krauss et al. 1987) that lead to extensive mixing at the end of the Gulf Stream. (CIMAS)