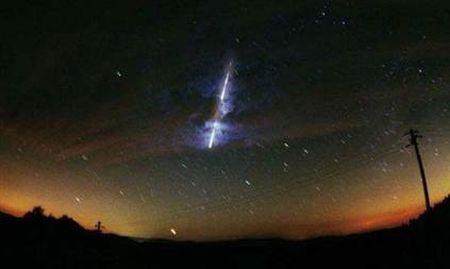 A meteor’s million-year journey through the solar system ended in the skies above New Zealand, casting a bright blue light and creating a sonic boom that was heard in Raglan.

The lights caused by the meteor’s entry into the earth’s atmosphere about 11pm on Monday lasted up to 30 seconds, and were seen from Nelson to Auckland. Carter Observatory reports that the size of meteor could be anything from 15cm to maybe a metre in size. It’s hard to tell exactly unless you know when it detonated. It certainly seems that detonation was low in the atmosphere. Stardome Observatory estimated that the fireball travelled 30km to 80km above land, before reportedly splitting into three pieces out at sea.

A witness near Motueka described on the Weatherwatch website seeing a “bright blueish white ball that looked nearly half the size of the full moon with a flaring yellow to orange tail“. A resident in Raglan described the meteor breaking the sound barrier, which woke up his dogs and was “very scary“.

The sound could have been a sonic boom, or a terminal explosion as the meteor blew apart. It is likely that any debris will have fallen into the ocean. Scientists would be eager to recover fragments but the chance of recovery is slim – only nine have been recovered in this country.

Meteor entries are common and observed in New Zealand about every three years but cloudy weather or an arrival in daylight can mean they are missed. (New Zealand Herald)

It was seen over a wide area of the North Island but most prominently in Auckland.

Auckland’s Stardome Observatory reports it would have been an amazing sight – but their astronomers were not among those to witness it. The sighting reports suggested it was more likely to be a meteor than a piece of space junk. The explosion would have been 80 kilometres up and at very high speed.

On Auckland’s North Shore David Burger of Long Bay told Stuff that he was texting in bed “when suddenly the whole sky lit up.“Vik Olliver in West Auckland saw it race across the Southern Cross and Pointers. “Everything in Laingholm and across the Manukau was lit as if by a welder’s flash. “It was several times brighter than daylight with a definite blue tint. My daughter saw it from her bedroom on the opposite side of the house through curtains and a bush canopy.”

Blair Hill was sitting in his spa pool at Forrest Hill, on the North Shore, when the meteor raced over the sky tracking north-north east. “This would be one of the brightest I have seen if not the brightest. It must have been travelling at over 10,000km an hour, judging on the speed of planes that I see flying over the house here all the time.”

One eyewitness said the meteor went over Waiuku, in south Auckland, heading north east. It was “so bright that it lit up the lawn like daylight. About 20 seconds later heard big bang and rumbling noise for some time from distance in that direction.”

Another witness in Albany, north of the city, reported “a large bright white flash around me then looked up and saw a large thing light up really high in the sky on a low angle“. It was even seen in the city with a Grey Lynn resident writing of “a large, bright blue object speed across the sky“.

One WeatherWatch witness in Wellington said it was seen as a distant large meteor. “Largest meteor I have ever seen.“(Stuff)