Using a first-of-its-kind, high-resolution numerical model to describe ocean circulation during the last ice age about 21 000 years ago, oceanographer Alan Condron of the University of Massachusetts Amherst has shown that icebergs and meltwater from the North American ice sheet would have regularly reached South Carolina and even southern Florida. The models are supported by the discovery of iceberg scour marks on the sea floor along the entire continental shelf.

Such a view of past meltwater and iceberg movement implies that the mechanisms of abrupt climate change are more complex than previously thought, Condron says.

“Our study is the first to show that when the large ice sheet over North America known as the Laurentide ice sheet began to melt, icebergs calved into the sea around Hudson Bay and would have periodically drifted along the east coast of the United States as far south as Miami and the Bahamas in the Caribbean, a distance of more than 3 100 miles, about 5 000 kilometers.” 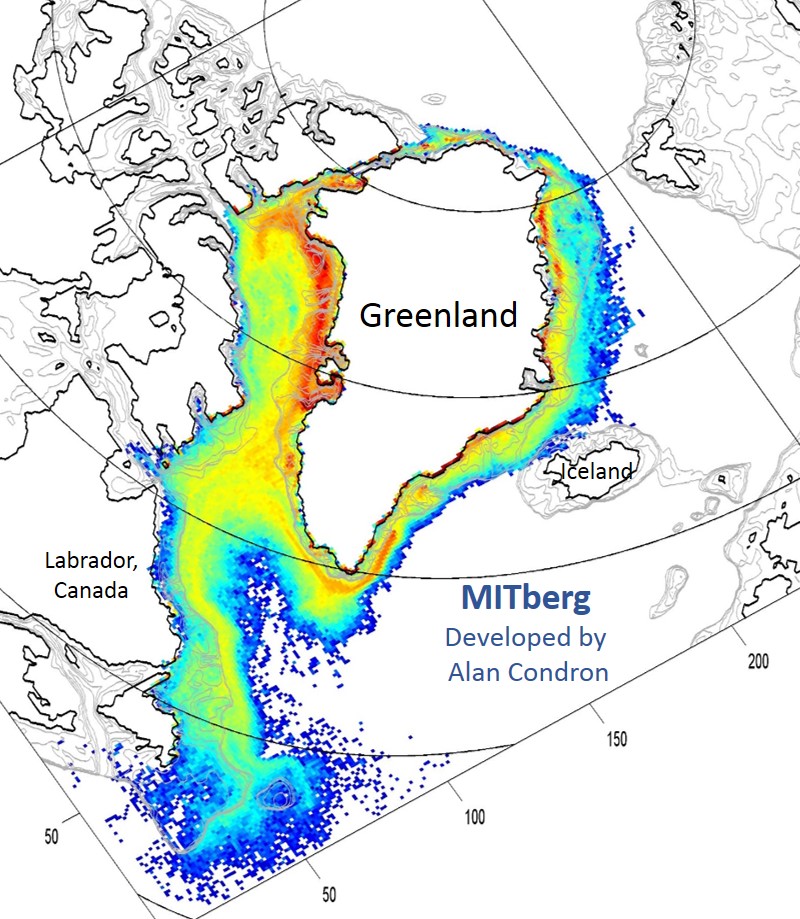 The drift of icebergs from the Greenland Ice Sheet simulated by MITberg.  Image credit: UMass Amherst

Condron's work, conducted with Jenna Hill of Coastal Carolina University, is described in the current advance online issue of Nature Geoscience. “Determining how far south of the subpolar gyre icebergs and meltwater penetrated is vital for understanding the sensitivity of North Atlantic Deep Water formation and climate to past changes in high-latitude freshwater runoff,” the authors say.

Abrupt, centennial-to-millennial shifts in Northern Hemisphere climate during the last deglaciation are thought to have been triggered by the discharge of large volumes of meltwater and icebergs to the subpolar North Atlantic. The new study shows that meltwater and icebergs were also transported directly from the Laurentide ice margin to the subtropical North Atlantic in a narrow coastal current.

Hill analyzed high-resolution images of the sea floor from Cape Hatteras to Florida and identified about 400 scour marks on the seabed that were formed by enormous icebergs plowing through mud on the sea floor. These characteristic grooves and pits were formed as icebergs moved into shallower water and their keels bumped and scraped along the ocean floor. 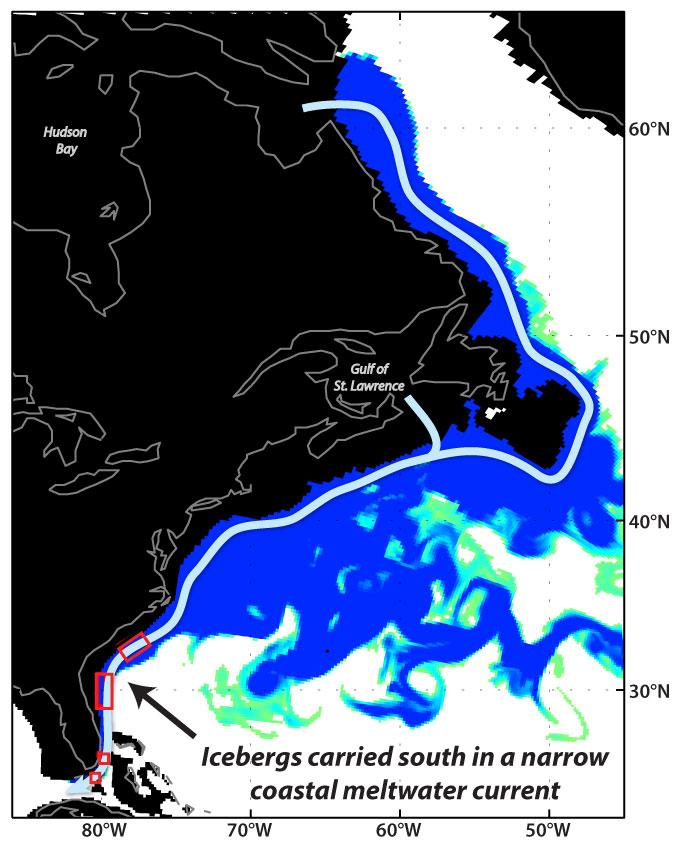 This is a map showing the pathway taken by icebergs from Hudson Bay, Canada, to Florida. The blue colors (behind the arrows) are an actual snapshot from the authors' high resolution model showing how much less salty the water is than normal. The more blue the color the less salty it is than normal. In this case, blue all the way along the coast shows that very fresh, cold waters are flowing along the entire east coast from Hudson Bay to Florida. Image credit: UMass Amherst

“The depth of the scours tells us that icebergs drifting to southern Florida were at least 1 000 feet, or 300 meters thick,” says Condron. “This is enormous. Such icebergs are only found off the coast of Greenland today.” 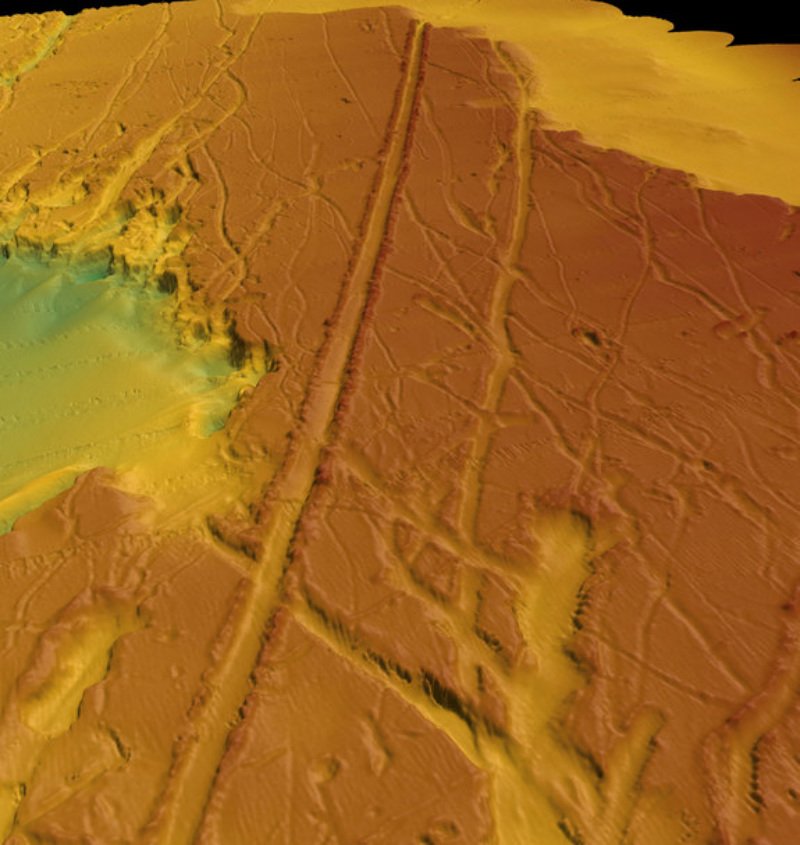 To investigate how icebergs might have drifted as far south as Florida, Condron simulated the release of a series of glacial meltwater floods in his high-resolution ocean circulation model at four different levels for two locations, Hudson Bay and the Gulf of St. Lawrence. 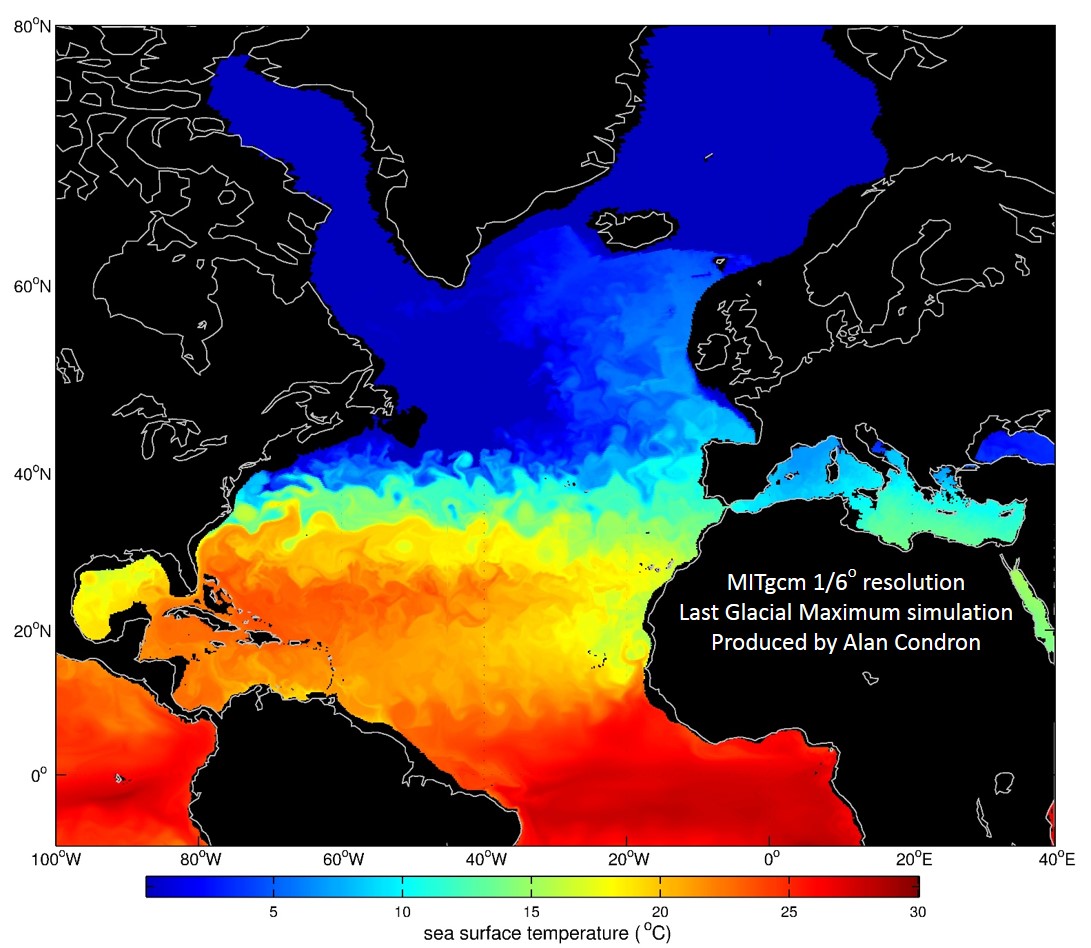 The above image shows the temperatures of the oceans surface 21 000 years ago during winter, as simulated by MITgcm. Compared to modern-day the Gulf Stream is more zonal (i.e warm water flows in an easterly direction rather northeasterly) and transports less heat to northwest Europe and the Arctic.  Image credit: UMass Amherst

Condron reports, “In order for icebergs to drift to Florida, our glacial ocean circulation model tells us that enormous volumes of meltwater, similar to a catastrophic glacial lake outburst flood, must have been discharging into the ocean from the Laurentide ice sheet, from either Hudson Bay or the Gulf of St. Lawrence.”

Further, during these large meltwater flood events, the surface ocean current off the coast of Florida would have undergone a complete, 180-degree flip in direction, so that the warm, northward flowing Gulf Stream would have been replaced by a cold, southward flowing current, he adds.

“This new research shows that much of the meltwater from the Greenland ice sheet may be redistributed by narrow coastal currents and circulate through subtropical regions prior to reaching the subpolar ocean. It’s a more complicated picture than we believed before,” Condron says.

He and Hill say that future research on mechanisms of abrupt climate change should take into account coastal boundary currents in redistributing ice sheet runoff and subpolar fresh water.