Some scientists believe that an extraterrestrial impact, such as a meteor collision, caused global cooling around 13 000 years ago. However, a new study presents evidence left in layers of sediment showing that the event was most likely caused by volcanic eruptions. In addition, the study showed that the geochemical signature associated with the cooling event is not unique but occurred four times between 9 000 and 15 000 years ago.

The team began researching Hall's Cave in central Texas around 2017 and found that within it are layers of sediment, first identified by Thomas Stafford of Stafford Research Laboratories in Colorado, that dated to the time of the impact– over 20 000 years.

"One big question was, did an extraterrestrial impact occur near the end of the last ice age, about 13 000 years ago as the ice sheets covering Canada were melting, and cause an abrupt cooling that thrust the northern hemisphere back into the ice age for an extra 1 200 years?" Michael Waters said, director of The Center for The Study of the First Americans and Distinguished Professor at Texas A&M University.

Some researchers believed that the event, which cooled the planet by about 3 °C (5.4 °F), was triggered by an extraterrestrial impact, like a meteor collision. However, Waters and his team found that the evidence left in layers of sediment in the cave were most probably from volcanic eruptions.

"It is an exceptional record that offers a unique opportunity for interdisciplinary cooperation to investigate a number of important research questions," Waters added.

The cooling event also likely contributed to the extinction of large mammals, such as mammoths, horses, and camels that once roamed North America. 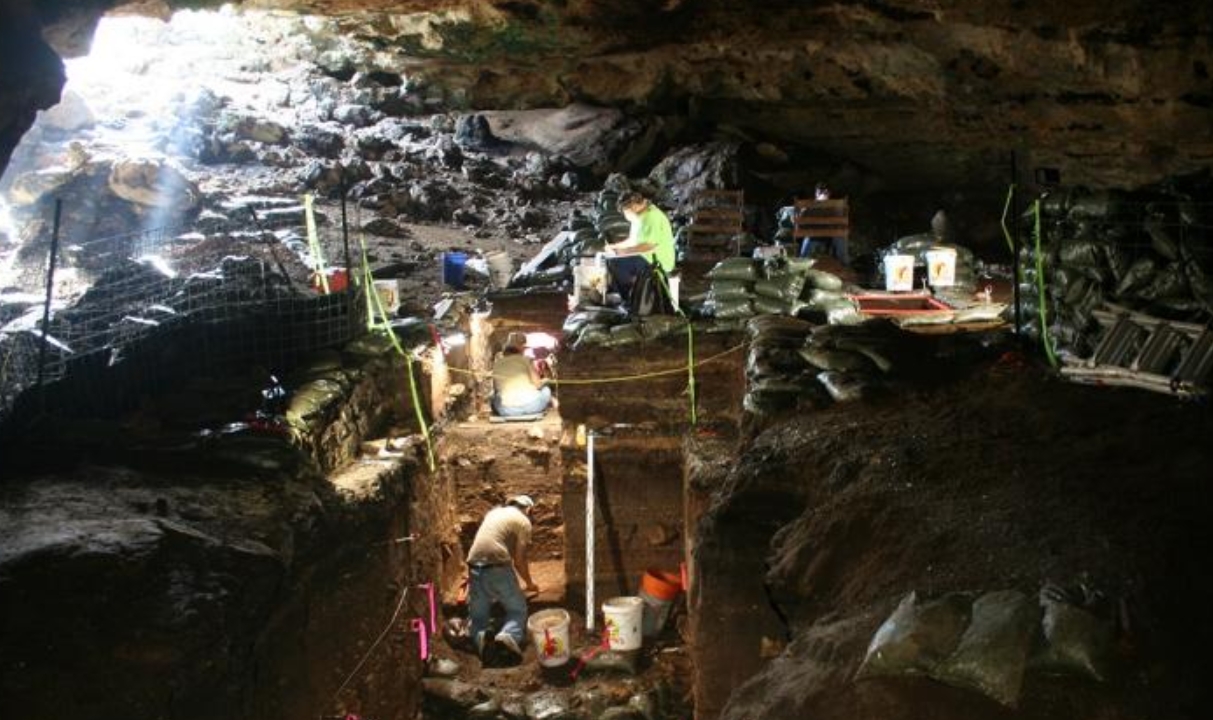 "This work shows that the geochemical signature associated with the cooling event is not unique but occurred four times between 9 000 and 15 000 years ago," said research head Alan Brandon, professor of geosciences at the University of Houston.

"Thus, the trigger for this cooling event didn't come from space. Prior geochemical evidence for a large meteor exploding in the atmosphere instead reflects a period of major volcanic eruptions."

"We took every avenue we could to come up with an alternative explanation, or even avoid, this conclusion. A volcanic eruption had been considered one possible explanation but was generally dismissed because there was no associated geochemical fingerprint."

Following a volcanic eruption, the global spread of aerosols reflects incoming solar radiation away from the Earth, which may lead to global cooling post-eruption for one to five years, depending on the timescales and size of the explosion.

"The Younger Dryas, which occurred about 13 000 years ago, disrupted distinct warming at the end of the last ice age," said co-author Steven Forman, professor of geosciences at Baylor.

The team completed the isotopic analysis of sediments retrieved from Hall's Cave and found that elements such as ruthenium, platinum, iridium, palladium, and rhenium were not present in the correct proportions– indicating that a meteor or asteroid impact could not have caused the event.

The researchers wrote, "The isotope analysis and the relative proportion of the elements matched those that were found in previous volcanic gases."

The Younger Dryas (YD) abrupt cooling event ca. 12.9 ± 0.1 ka is associated with substantial meltwater input into the North Atlantic Ocean, reversing deglacial warming. One controversial and prevailing hypothesis is that a bolide impact or airburst is responsible for these environmental changes. Here, highly siderophile element (HSE; Os, Ir, Ru, Pt, Pd, and Re) abundances and 187Os/188Os ratios were obtained in a well-dated sediment section at Hall’s Cave, TX, USA to test this hypothesis. In Hall’s Cave, layers below, above, and in the YD have 187Os/188Os ratios consistent with the incorporation of extraterrestrial or mantle-derived material. The HSE abundances indicate that these layers contain volcanic gas aerosols and not extraterrestrial materials. The most likely explanation is that episodic, distant volcanic emissions were deposited in Hall’s Cave sediments. Coupled 187Os/188Os ratios and HSE concentration data at close stratigraphic intervals are required to effectively differentiate between bolide and volcanic origins.