An analysis of Western Australia's coastline suggest its landscape isn't as tectonically stable as previously thought.

University of Western Australia geohazards researcher Beau Whitney says tectonic movement in Australia is generally assumed to be so low that places like Cape Range in the Gascoyne can be used to benchmark ancient sea levels. However, his fieldwork in the Cape Range has revealed this ‘stable’ landscape has recently been on the move.

Whitney studied the remains of a 125-thousand-year-old exposed coral platform, mapping changes in its elevation and comparing them to the modern shoreline.

“We found the elevation of the platform changes systematically along the coastline, coincident with folding in the older bedrock,” he says. “That indicates to us that these features have been actively folding, tectonically deforming, since the coral platform formed 125 thousand years ago.”

Whitney says the coral platform’s formation coincided with the last time the world’s sea levels were higher than current levels.

"Corals thrive only within a limited elevation range – constrained by high and low tides as well as wave movement – the position of the platform can be a good indicator of sea levels at the time it formed. But only in places without tectonic activity." 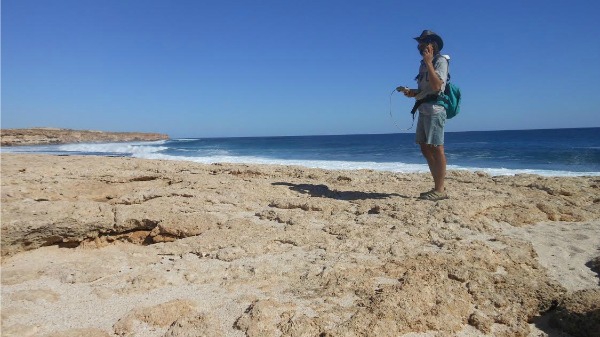 “In Papua New Guinea, or California, or New Zealand, where we have very rapid, active tectonics changing the landscape, you may have the 125-thousand-year-old marine deposits 50 metres or more above modern sea level.

“But some places in Australia, you will have this beautiful platform surface – homogenously two metres above modern sea level, and undeformed.”

Whitney says the fluctuations in platform elevation along the Cape Range indicate tectonic forces do play a role in shaping WA’s landscape.

These locations are far from tectonic plate boundaries and Whitney says the “million-dollar question” is why we experience earthquakes in such places.

“The paradigm is that Australia is stable, that there’s no earthquake hazard, and so it becomes something that is disregarded or ignored,” he said.

While news that Australia is tectonically active isn’t cause for alarm, Whitney's research is a good reminder that science cannot be based on assumptions or absolutes.