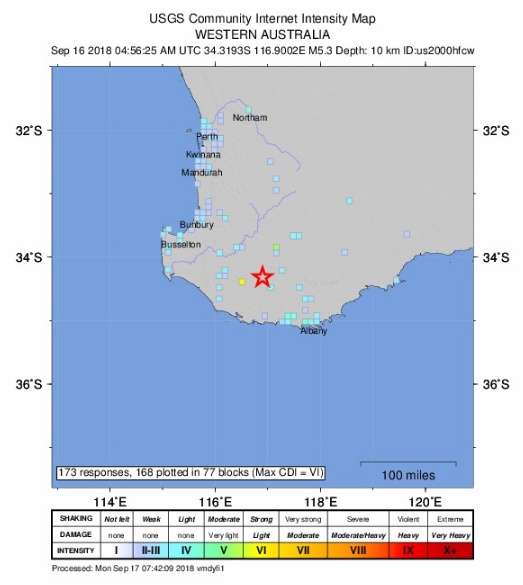 Officials said there were wall cracks at two homesteads in the Lake Muir region (near the epicenter), adding that there were no other initial reports of damage.

Senior Geoscience Australia seismologist Phil Cummins said it was an uncommonly large earthquake and the second quake to hit the region in a week, ABC reports. A 3.5-magnitude earthquake hit off the coast of Albany on September 12 and a 3.4-magnitude hit Walpole on September 13.

"The M5.7 quake occurred roughly between Walpole and Kojonup on the south coast and was felt all the way from Albany up to Perth," he said. "It is quite a large earthquake, it is large enough to cause damage but it's unlikely to have done so because it occurred in a relatively remote area."

"You would expect to get a 5.6 (magnitude) maybe once every couple of years throughout Australia," Cummins said.

Locals described the quake as short and very violent.

"We were having lunch when everything began violently shaking," one resident of Modalup, close to the epicenter, said. "It really felt like a bomb went off under your feet. It just kept echoing through the ground for nearly 40 seconds, maybe up to a minute."

Others said they did not feel the quake but were rattled by a loud noise.

The strongest quake in Australia is M6.6 of January 22, 1988 with the epicenter near Tennant Creek, Northern Territory. There were no injuries reported but the quake warped the natural gas pipeline and opened a 35 km (21.7 miles) long fault scarp, with a step of 2 m (6.6 feet).

The largest quake in Western Australia is M6.3 of April 29, 1941. It is still Australia's fifth-largest quake.

Only about 12 earthquakes in Australia’s modern history have caused the ground to rupture.