Tropical Cyclone "Anika" formed on February 25, 2022, in the Timor Sea as the 7th named storm of the 2021/22 Australian region cyclone season. The cyclone is slowly moving toward the northern Kimberley coast, Western Australia. It's expected to reach category 2 strength on the Australian scale before making landfall over the north Kimberley coast overnight or during Sunday, February 27.

Anika is located in the southern Timor Sea and is moving slowly south.

The system is expected to reach category 2 prior to making landfall over the north Kimberley coast overnight or during Sunday, according to the Australian Bureau of Meteorology (BOM).

Anika is now unlikely to take an easterly track towards Darwin, and the Watch for Darwin and the Tiwi Islands has been canceled, BOM added.

From late Sunday the system is forecast to weaken over land and move southwest, remaining near the Kimberley coast. 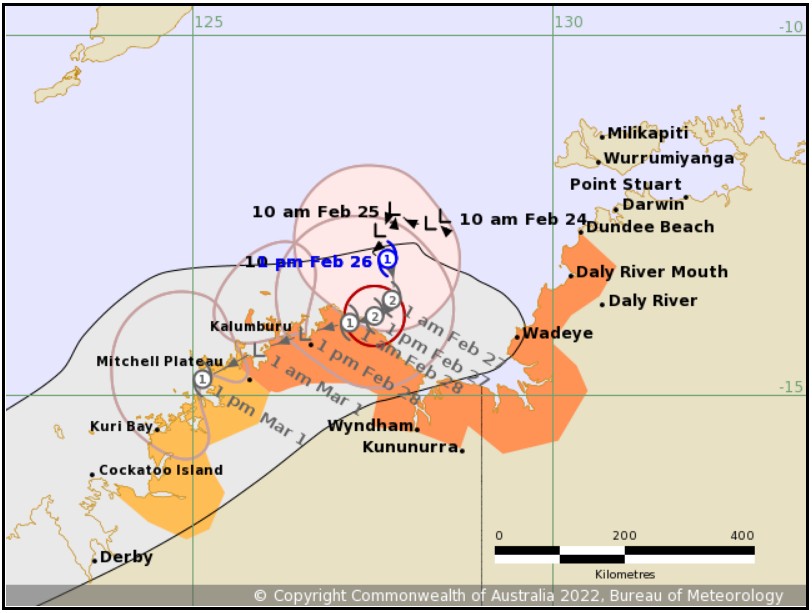 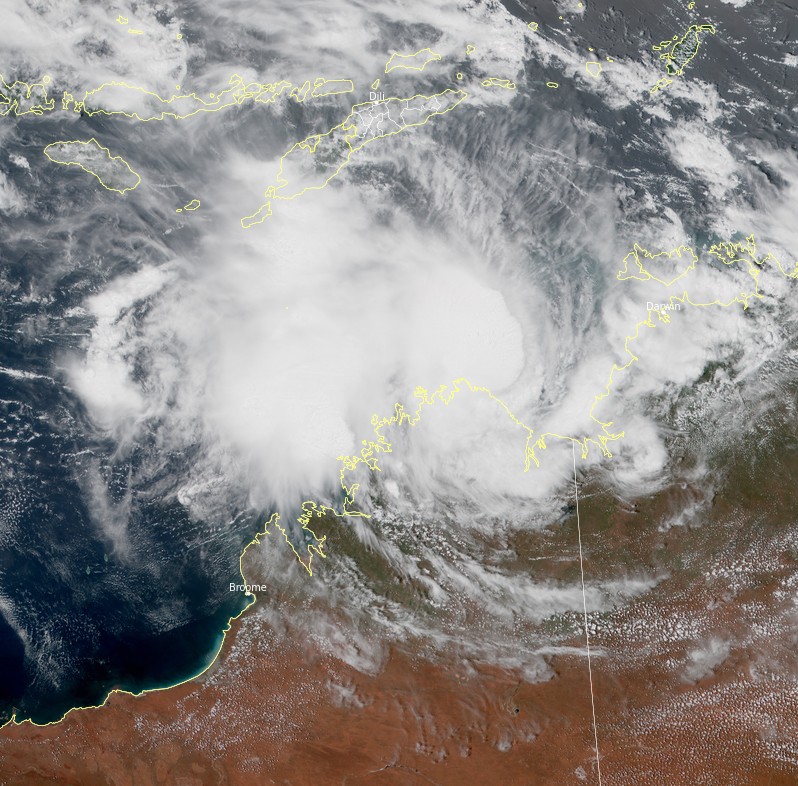 Destructive winds with gusts to 130 km/h (80 mph) are expected to develop about the coastal fringe between approximately Kalumburu and Wyndham near where the system crosses the coast overnight tonight or during Sunday.

Gales with gusts to 100 km/h (62 mph) are expected to develop from this afternoon between Kalumburu and Wyndham. Depending on the speed of Anika, gales could extend west to Mitchell Plateau or east to the Western Australia/Northern Territory border later today.

If the cyclone moves closer to the NT coast, gales could extend from the WA/NT border to Dundee Beach later today.

Gales with gusts to 100 km/h (62 mph) may develop between Mitchell Plateau and Cockatoo Island on Sunday if the system moves faster to the southwest and remains near or just offshore from the coast.

Heavy rainfall is possible over the Tiwi Islands and western parts of the Daly District today with the monsoonal flow to the north of the system.

Heavy rainfall is also expected to develop about northern parts of the Kimberley later today and continue into early next week as the system approaches the coast.

Tides near where the system crosses the coast are likely to rise above the normal high tide mark with very rough seas and flooding of low-lying coastal areas.

A Yellow Alert is in effect for people in or around Kalumburu to Wyndham, but not including Wyndham, you need to take action and get ready to shelter from a cyclone.

A Blue Alert is in effect for people between Wyndham and the NT Border, but not including Kununurra. Kalumburu to Mitchell Plateau but not including Kalumburu, you need to prepare for cyclonic weather and organize an emergency kit including a first aid kit, torch, portable radio, spare batteries, food and water.

Remaining people in the North Kimberley are advised to stay up to date with weather warnings and forecasts.