Lam has now weakened to a tropical low and it continues to move in a SW direction over the central Top End. While winds have eased, the system is still producing widespread heavy rain.

At least six houses have been destroyed as it hit land. Water, telecommunications and electricity services have been cut to Galiwiniku residents on Elcho Island, which bore the brunt of the storm.

Power and water may be out for at least a week, authorities said.

Thunderstorms and heavy rain which may lead to flash flooding are forecast for parts of the Daly, Tiwi, Gregory, western Arnhem and western Carpentaria forecast districts.

Abnormally high tides which may cause sea water flooding of low lying areas are forecast for the eastern Arnhem and eastern Carpentaria forecast districts. 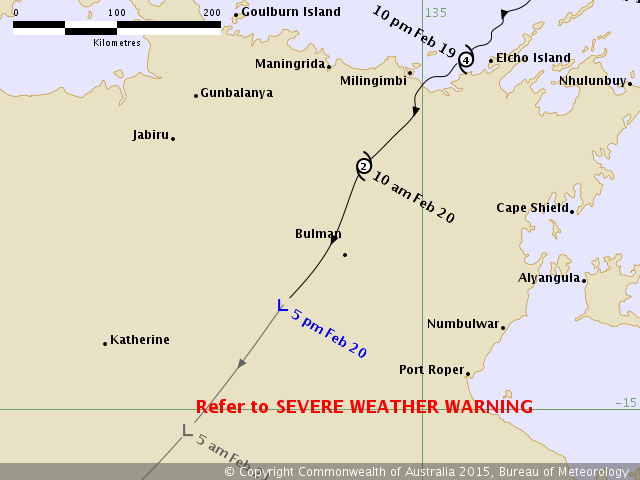 Since crossing the coast near Shoalwater Bay, Queensland, Australia at 22:00 UTC on February 19 as a 203 km/h (126 miles) Category 5 storm, Tropical Cyclone "Marcia" has since weakened overland as it heads steadily southwards.

The system continues to move south over the Capricornia district at 19 km/h (11.8 mph), while weakening. 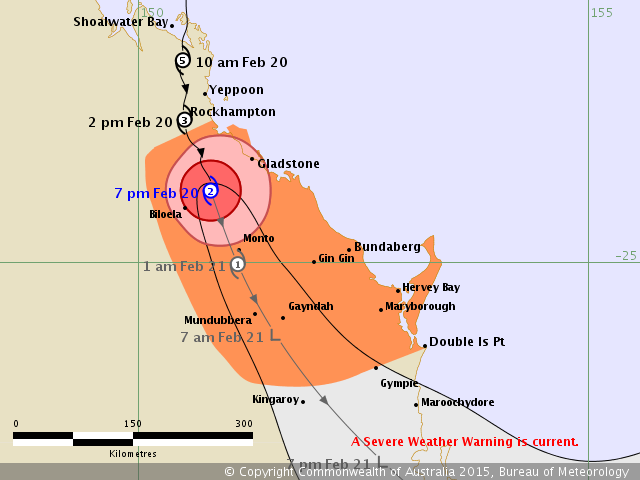 Gales with gusts to 120 km/h (74 mph) are expected about the coast and adjacent inland between Rockhampton and Double Island Point tonight, including Biloela, Monto, and Mundubbera.

Abnormally high tides will be experienced between Gladstone and Double Island Point with water levels expected to rise above the highest tide of the year on the high tide, even though the cyclone is inland. People living in areas likely to be affected by this flooding should take measures to protect their property as much as possible.

Heavy rainfall is already occurring about coastal and adjacent inland areas between Gladstone and Double Island Point, and is expected to continue tonight and Saturday morning as the cyclone moves south. A Flood Watch is current for the area.

Marcia is expected to turn to the south-southeast this evening local time, and weaken below cyclone strength tonight (local time).

There are reports of widespread damage wrought by Marcia on the Capricorn coast around Yeppoon and Rockhampton with roofs uplifted, powerlines and trees blown down.

#TCMarcia: A selection of the most dramatic images of the cyclone and the damage it has left http://t.co/czrLJeGIyE pic.twitter.com/hzvOrPHF96

JUST IN: Buildings on Great Keppel Island breaking up into the sea as ground erodes. @JennaHudson9 #TCMarcia #9News pic.twitter.com/HI7Pdm8y69

RT @JoelDry9: Sadly this is what many homes & businesses have suffered in Rockhampton from #TCMarcia #9news pic.twitter.com/jtpDo3rVUn 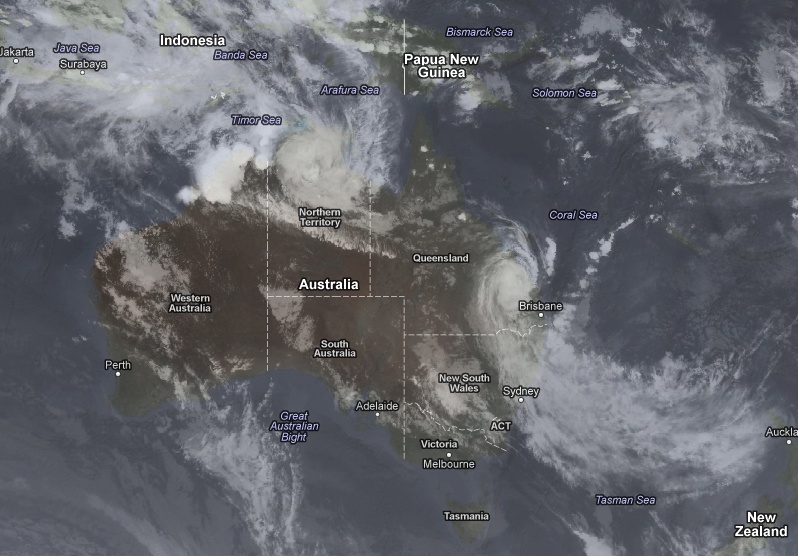