Tropical Cyclone "Marcia" rapidly and unexpectedly intensified over the last 24 hours and is now a Category 4 storm on the Australian tropical cyclone intensity scale. Australian Bureau of Meteorology (BOM) expects it to become a Category 5 storm before landfall. 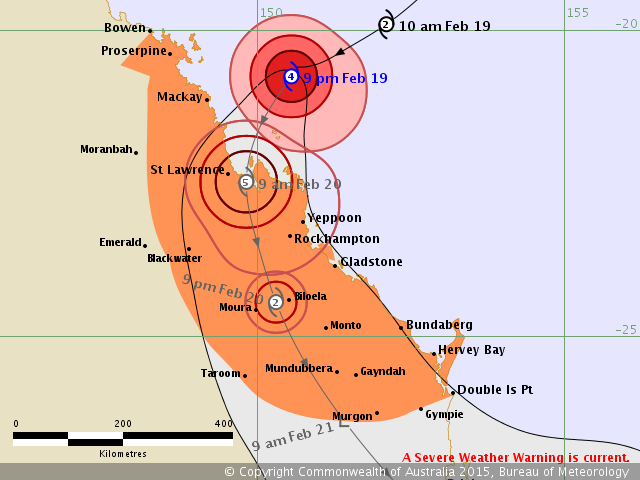 Landfall is expected between Mackay and Gladstone during Friday morning (local time). Severe tropical Cyclone Marcia is still expected to reach the most intense category (Category 5) before landfall but has at least temporarily stabilized at the stronger end of Category 4 in the past few hours. 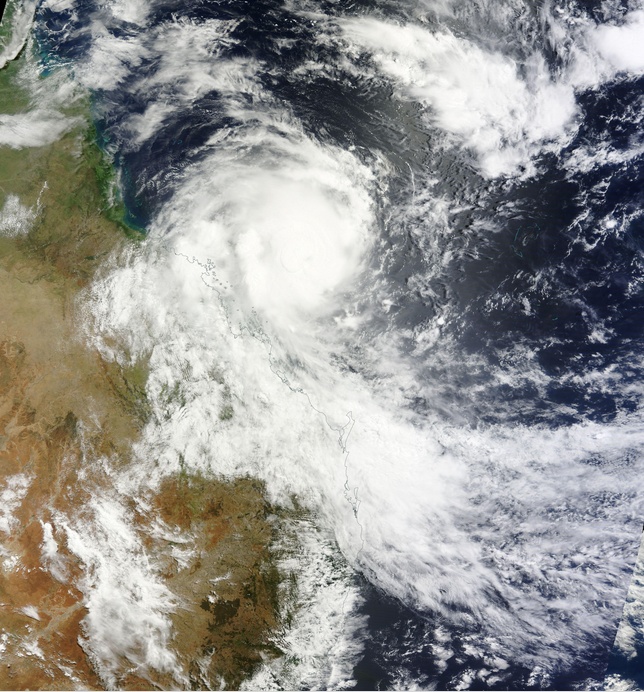 The very destructive core of severe tropical cyclone Marcia, with gusts to 295 km/h (183 mph), is expected to cross the coast between Mackay and Gladstone on Friday morning, BOM said.

Destructive winds are expected to develop about coastal and island communities between Mackay and Burnett Heads tonight.

Gales are now occurring about coastal and island communities between Mackay and Double Island Point, and are expected to extend north to Bowen later this evening and inland to areas including Blackwater, Moura, Biloela, Monto, Mundubbera, Taroom, and Murgon overnight and Friday.

Abnormally high tides will be experienced today and Friday with water levels expected to rise above the highest tide of the year on the high tide. Note also that abnormally high tides are also likely on Friday evening's high tide in parts of the warning area even though the cyclone is likely to be over land and weaker by then.

Coastal residents between Mackay and Double Island Point are specifically warned of the dangerous storm tide as the cyclone crosses the coast, and in the following high tide well after landfall during Friday evening. The sea is likely to rise steadily up to a level well above the normal tide, with damaging waves and flooding of some low-lying areas close to the shoreline. People living in areas likely to be affected by this flooding should take measures to protect their property as much as possible and be prepared to follow instructions regarding evacuation of the area if advised to do so by the authorities.

Thunderstorms are expected to develop near the coast between St Lawrence and Hervey Bay ahead of tropical cyclone Marcia crossing the coast. These thunderstorms may produce localized areas of destructive wind gusts in excess of 125 km/h (77.6 mph) about coastal and island communities.

Heavy rainfall will develop about coastal and island communities between Mackay and Double Island Point tonight, particularly over areas to the south of the system. A Flood Watch is current for the area.