As the sun skims through the galaxy, it flings out charged particles in a stream of plasma called the solar wind, and the solar wind creates a bubble extending far outside the solar system known as the heliosphere. For decades, scientists have visualized the heliosphere as shaped like a comet, with a very long tail extending thousands of times as far as the distance from the Earth to the sun.

New research suggests that the sun's magnetic field controls the large-scale shape of the heliosphere "much more than had been previously thought," says Merav Opher, associate professor of astronomy and director of the Center for Space Physics at Boston University (BU). In the new model, the magnetic field squeezes the solar wind along the sun's North and South axes, producing two jets that are then dragged downstream by the flow of the interstellar medium through which the heliosphere moves.

The model indicates that the heliospheric tail doesn't extend to large distances but is split into two by the two jets, and that the format of the jets is similar to that of astrophysical jets observed in many other stars and around black holes. 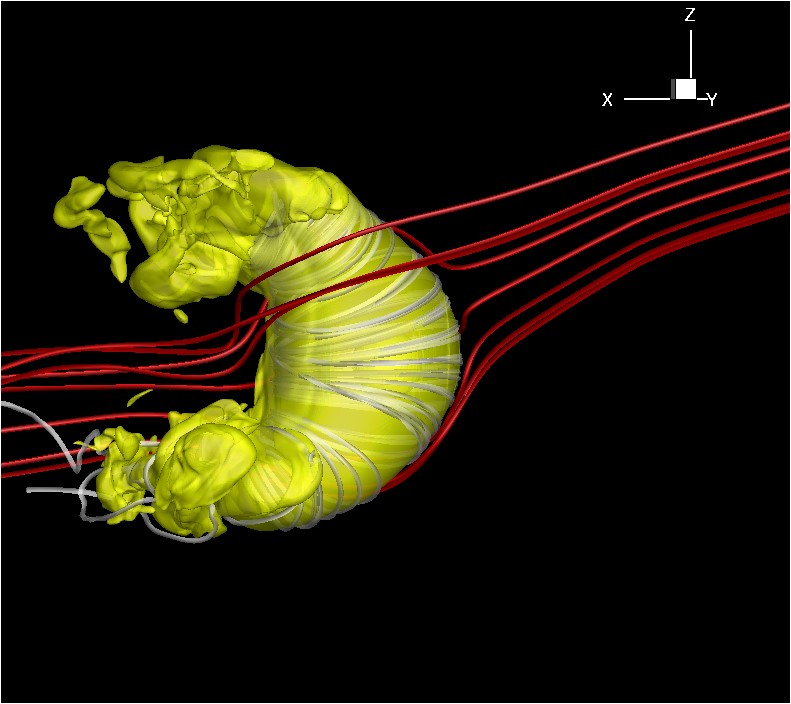 "Jets are really important in astrophysics," Drake adds. "And from what we can tell, the mechanism that's driving these heliospheric jets is basically the same as it is in, for example, the Crab Nebula. Yet this is really close by. If we're right about all of this, it gives us a local test bed for exploring some very important physics."

"It's also exciting that these jets are very turbulent, and will be very good particle accelerators," says Opher. The jets might, for example, play a role in the acceleration of so-called anomalous cosmic rays "We don't know where these particles are accelerated; it's a bit of a puzzle," she says.

Solving such puzzles will be important for space travel. The heliosphere acts as "a cocoon to protect us, by filtering galactic cosmic rays," she says. "Understanding the physical phenomena that govern the shape of the heliosphere will help us understand the filter."

The new view of the heliosphere was discovered by accident as the team studied surprising data from the Voyager 1 spacecraft and tried to understand how the galaxy's magnetic field interacts with the heliosphere.

One of two identical twin spacecraft launched in 1977, Voyager 1 in 2012 became the first man-made object to exit the heliosphere and plunge into interstellar space, according to the National Aeronautics and Space Administration (NASA).

As the spacecraft approached and then crossed this boundary, "Voyager had very bizarre observations," remarks Opher. It did not register the anticipated major change in the direction of magnetic field as it made the crossing.

Struggling to explain these unexpected results, the team initially focused on the nose of the heliosphere rather than its tail. "The Voyagers had a flashlight in the kitchen, and nobody was looking in the attic," she remarks. "We noticed, while studying the draping of the galaxy's magnetic field around the nose, that the heliosphere was much shorter than we anticipated." When she ran a much larger numerical simulation that continued to follow the flow of the solar wind, she unveiled the unforeseen two-tailed shape.

More data on the heliosphere's boundaries will become available sometime in the next few years when Voyager 2, like its twin, crosses into interstellar space.

In the meantime, additional evidence about the shape of the heliosphere is available from two spacecraft that measure so-called neutral energetic atoms (ENAs), particles that are created by interactions between the solar wind and neutral atoms from the interstellar medium, and whose presence gives an indication of the heliosphere's border.

Opher says that results from the Interstellar Boundary Explorer (IBEX) project can be interpreted to offer support for the two-lobed tail model, although she notes that IBEX scientists offer a different interpretation. Data from the Cassini spacecraft's ENA measurements also may suggest an almost "tailless" heliosphere, she adds.