There are currently three tropical storms in the Eastern Pacific Ocean – Tropical Storm/Hurricane "Karina", Tropical Storm "Lowell" and newly formed Tropical Storm "Marie". Both Karina and Lowell will gradually weaken over the next couple of days. Marie, however, is expected to rapidly intensify and reach major hurricane status (Category 3 or greater on the Saffir-Simpson Wind Scale) by Monday, August 25.​ 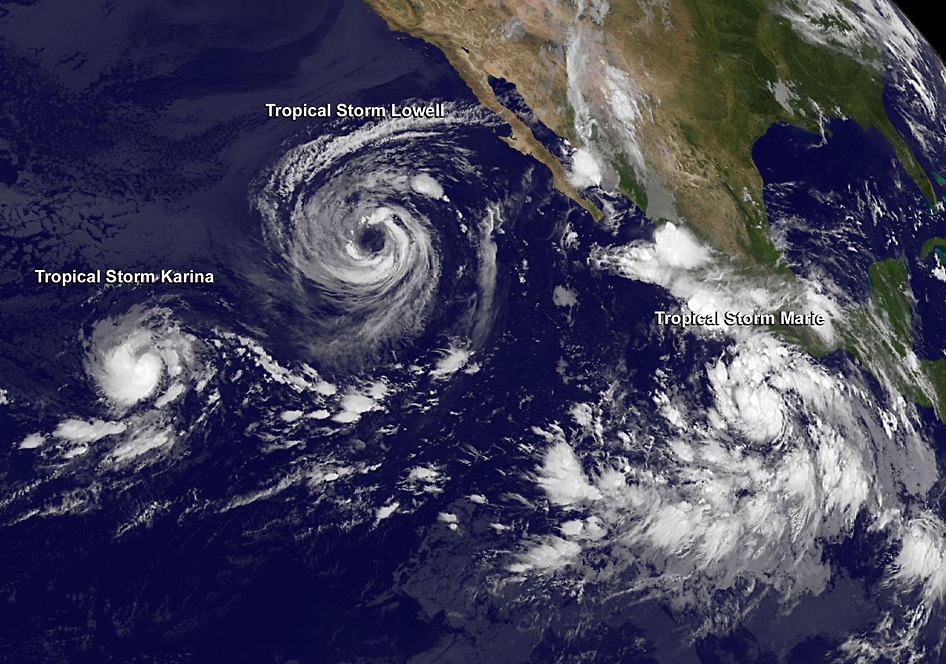 Tropical Depression 12-E was born in the eastern Pacific Ocean on August 19 and in less than 24 hours it strengthened into Tropical Storm "Lowell". It continued strengthening and briefly reached hurricane status.

Although Lowell is not over land the storm is large enough today to cause strong ocean swells in Baja California. NASA's Terra satellite passed over Lowell yesterday and captured an image that shows how it dwarfed Tropical Storm "Karina". 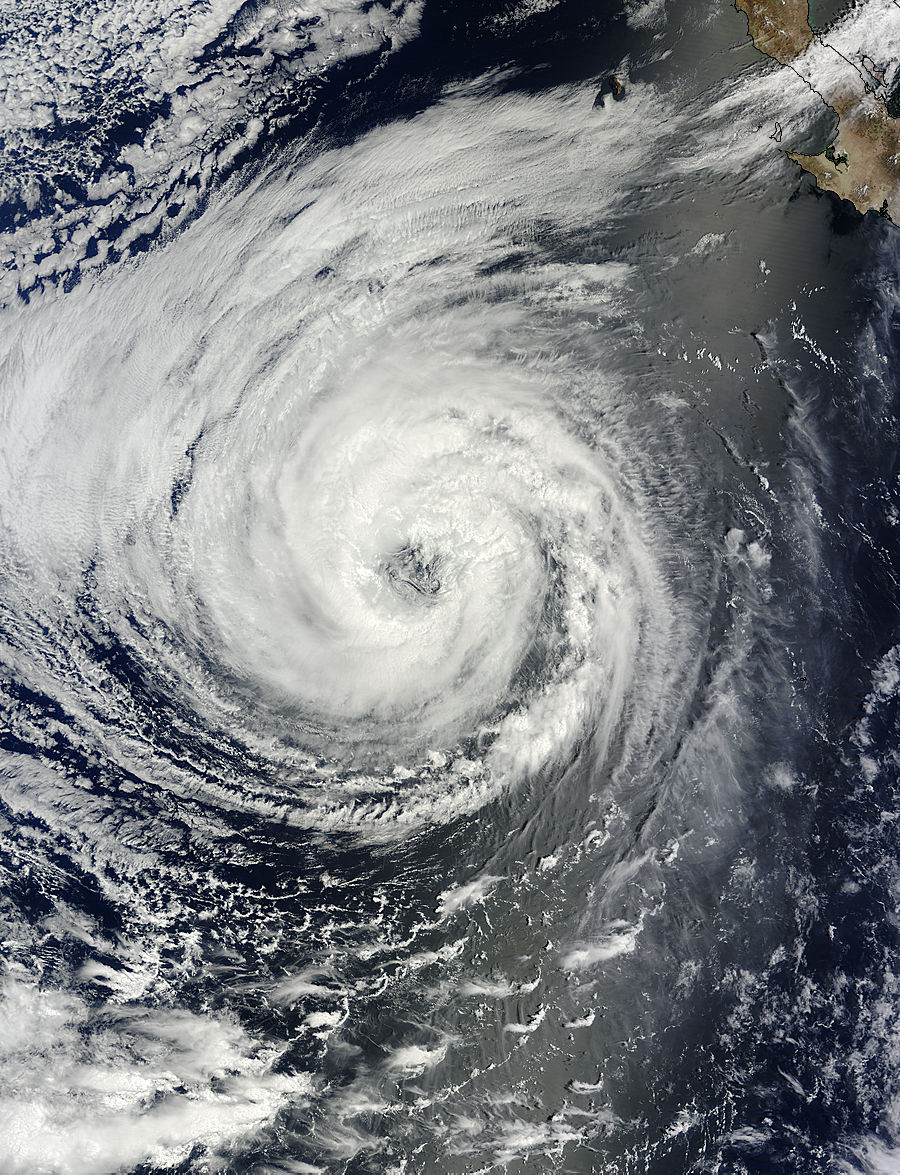 On August 21 at 18:45 UTC NASA's Terra satellite passed over Lowell when it was a hurricane with maximum sustained winds near 75 mph as it moved through the Eastern Pacific Ocean. Image credit: NASA Goddard MODIS Rapid Response Team

The National Hurricane Center (NHC) noted that swells generated by Lowell will affect the west coast of the Baja California, Mexico, peninsula and portions of the coast of southern California through the weekend of August 23 and 24. These swells are likely to cause life-threatening surf and rip current conditions.

NASA's Terra satellite passed over Lowell when it was still a hurricane on August 21 at 18:45 UTC. The Moderate Resolution Imaging Spectroradiometer or MODIS instrument aboard Terra showed a large ragged eye-like feature in Lowell. By August 22, the cloud top temperatures in the thunderstorms surrounding the eye feature continued to warm and decrease in coverage from the previous day, indicating that the evaporation and uplift in the air is waning and thunderstorms are not getting as high in the atmosphere.

At 09:00 UTC today, Tropical Storm Lowell's maximum sustained winds dropped to 65 mph (100 km/h) and gradual weakening is expected over the next couple of days. In fact, Lowell is expected to become a post- tropical storm over the weekend of August 23 and 24.

The center of Tropical Storm "Lowell" was located near latitude 21.5 north and longitude 123.4 west. That's about 870 miles (1 395 km) west of the southern tip of Baja California. Lowell is moving toward the northwest near 8 mph (13 km/h) and this general motion is expected to continue during the next couple of days.

Forecaster Daniel Brown at the NHC noted "Lowell will be moving over progressively cooler waters and into a drier and more stable environment during the next several days.  This should lead to gradual weakening, and Lowell is expected to become a gale-force post-tropical cyclone in a couple of days."

Karina strengthened from the eleventh tropical depression in the Eastern Pacific which formed at 03:00 UTC on August 12. Just twelve hours later the depression had become better organized and winds increased to tropical storm strength.

The system was weakening on August 20 when NASA's Terra satellite passed overhead. MODIS instrument aboard Terra snapped a visible image of Tropical Storm Karina on August 20 at 19:40 UTC. The MODIS image showed that a thick band of strong thunderstorms spiraled into Karina's center from the southeast. The band of thunderstorms wrapped around Karina's eastern and northern quadrants, spiraling into the center from the west, making the tropical cyclone look like the number nine. 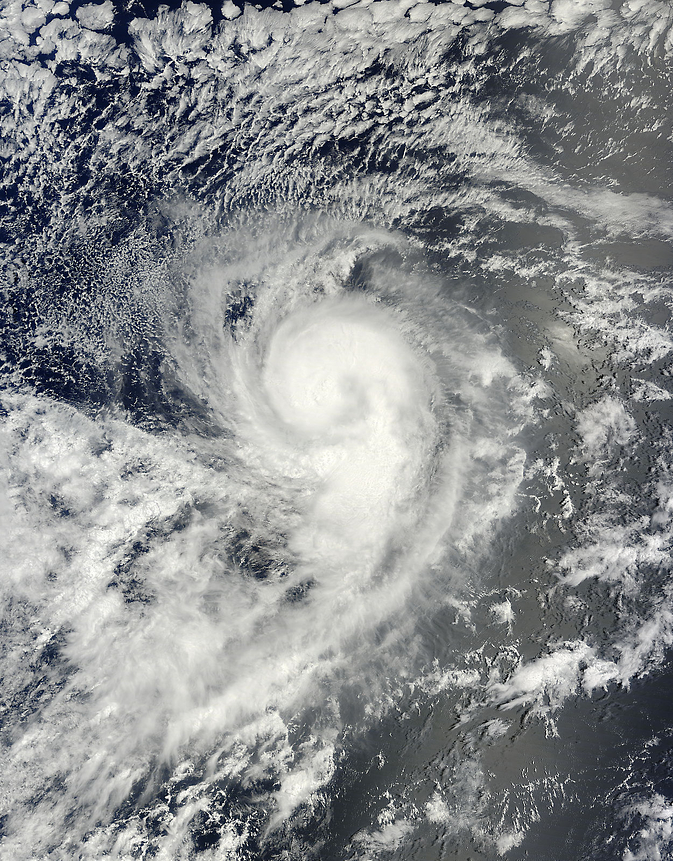 When NASA's Terra satellite passed over Tropical Storm Karina on August 20, it looked like a giant number 9 as a thick band of thunderstorms wrapped into its center. Image credit: NASA Goddard MODIS Rapid Response Team

At 15:00 UTC today, Tropical Storm Karina's maximum sustained winds had increased to near 70 mph (110 km/h), and the NHC noted that some fluctuations in intensity are possible before Karina begins to weaken on August 23. The center of Tropical Storm Karina was located near latitude 15.0 north and longitude 135.6 west, about 1 325 miles (2 130 km) east of Hilo, Hawaii. Karina is moving to the northeast near 3 mph (6 km/h) and is expected to turn to the east-northeast as it continues being affected by nearby Tropical Storm Lowell.

Forecaster Roberts at NHC noted that in two days Karina should be on a weakening trend because the storm will be moving into cooler waters and it will run into stable, dry air.

Powerful thunderstorms were seen stretching toward the top of the troposphere in infrared imagery from NASA's Aqua satellite. 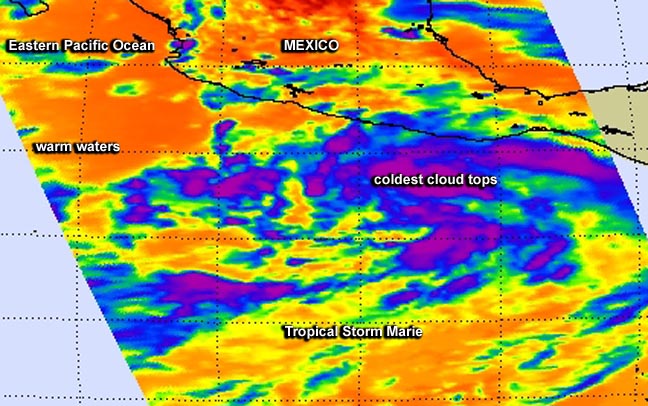 NASA's Aqua satellite passed over Tropical Storm Marie on August 21 at 20:05 UTC when it was still classified as a low pressure area. The Atmospheric Infrared Sounder or AIRS instrument aboard Aqua read cloud top temperatures in the storm, and showed cloud tops as cold as -63F/-52C around the storm's center and in bands of thunderstorms east and south of the center. AIRS data showed that Marie is located in very warm waters with surface temperatures near 30 Celsius (85 Fahrenheit), which will assist the storm in development and intensification. Sea surface temperatures of at least 26.6C (80F) are needed to maintain a tropical cyclone, while warmer sea surface temperatures can help in evaporation and thunderstorm development.

Marie's maximum sustained winds increased to near 45 mph (75 km/h) and the NHC expects rapid intensification. In fact, forecasters expect Marie to become a hurricane late in the day on August 22 and reach major hurricane status (Category 3 or greater on the Saffir-Simpson Wind Scale) by Monday, August 25.

At 09:00 UTC today, the center of Tropical Storm "Marie" was located near latitude 12.8 north and longitude 101.0 west. The system is moving toward the west-northwest near 16 mph (26 km/h) and is expected to slow as it intensifies. The estimated minimum central pressure is 1004 millibars.

The NHC noted that satellite microwave data showed that Marie has a well-defined low-level ring, which can often be a precursor to rapid intensification if environmental conditions are favorable.