Marie formed off of Mexico's southwestern coast at 03:00 UTC on August 22 consolidating into Tropical Depression 13-E and strengthened into a tropical storm by 09:00 UTC. Over the next two days Marie rapidly intensified and reached Category 4 hurricane status by 20:40 UTC on August 24 causing dangerous surf along the west coast of Mexico.

Swells generated by this massive system will continue to affect much of the west coast of the Baja California, the extreme southern Gulf of California and southern California through Thursday, August 28. Life-threatening surf and rip current conditions are likely as a result of these swells as well as minor coastal flooding.

At 18:20 UTC that day, MODIS instrument aboard NASA's Terra satellite captured Hurricane Marie's center just west of Socorro Island (population 45), a small volcanic island located about 600 km off the coast of Mexico. A thick band of powerful thunderstorms surrounded the center of circulation, and bands of thunderstorms spiraled into the center from the west, that wrapped entirely around the outside perimeter. The island was pummeled with heavy rainfall, hurricane-force winds and high, dangerous surf. 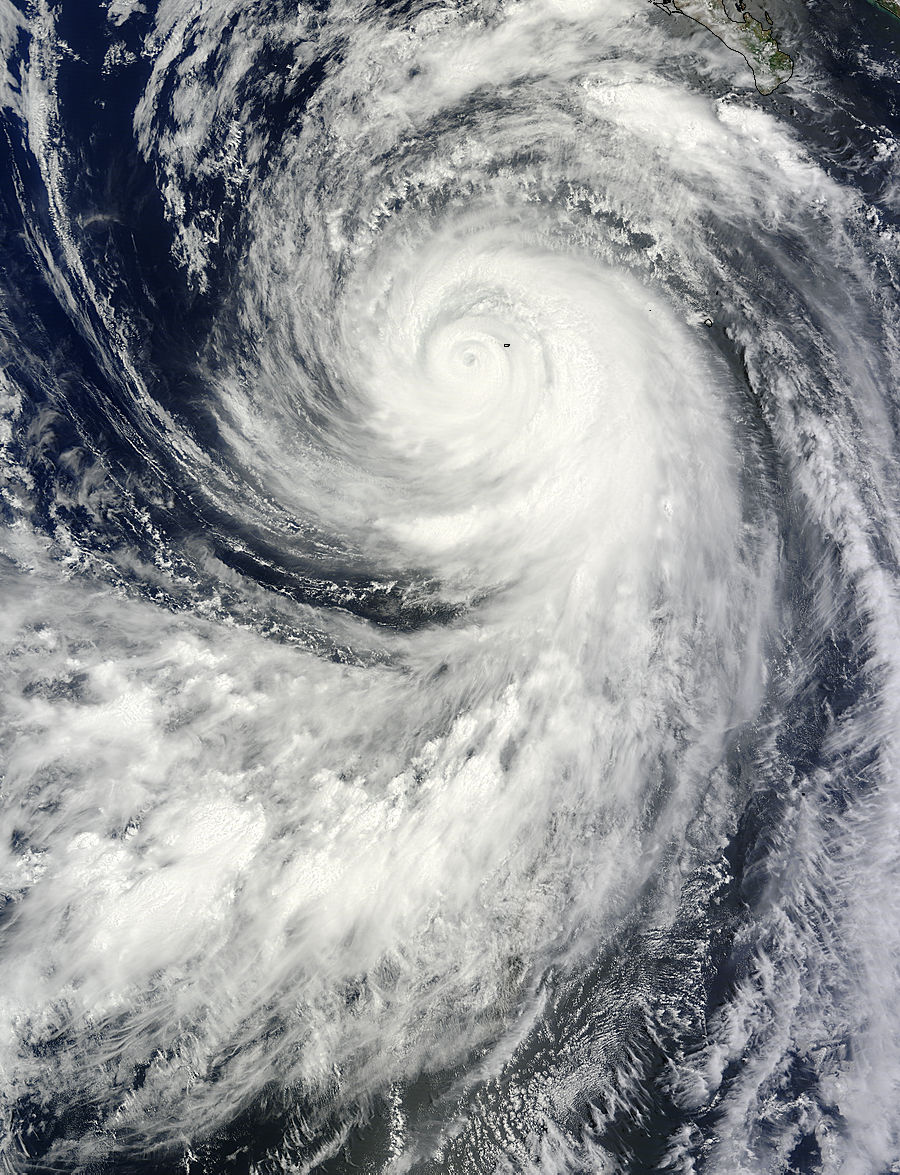 By August 26 Marie was so large that it was bringing rough surf to the southern coast of California while almost 900 miles (1 488 km) west of Baja California. 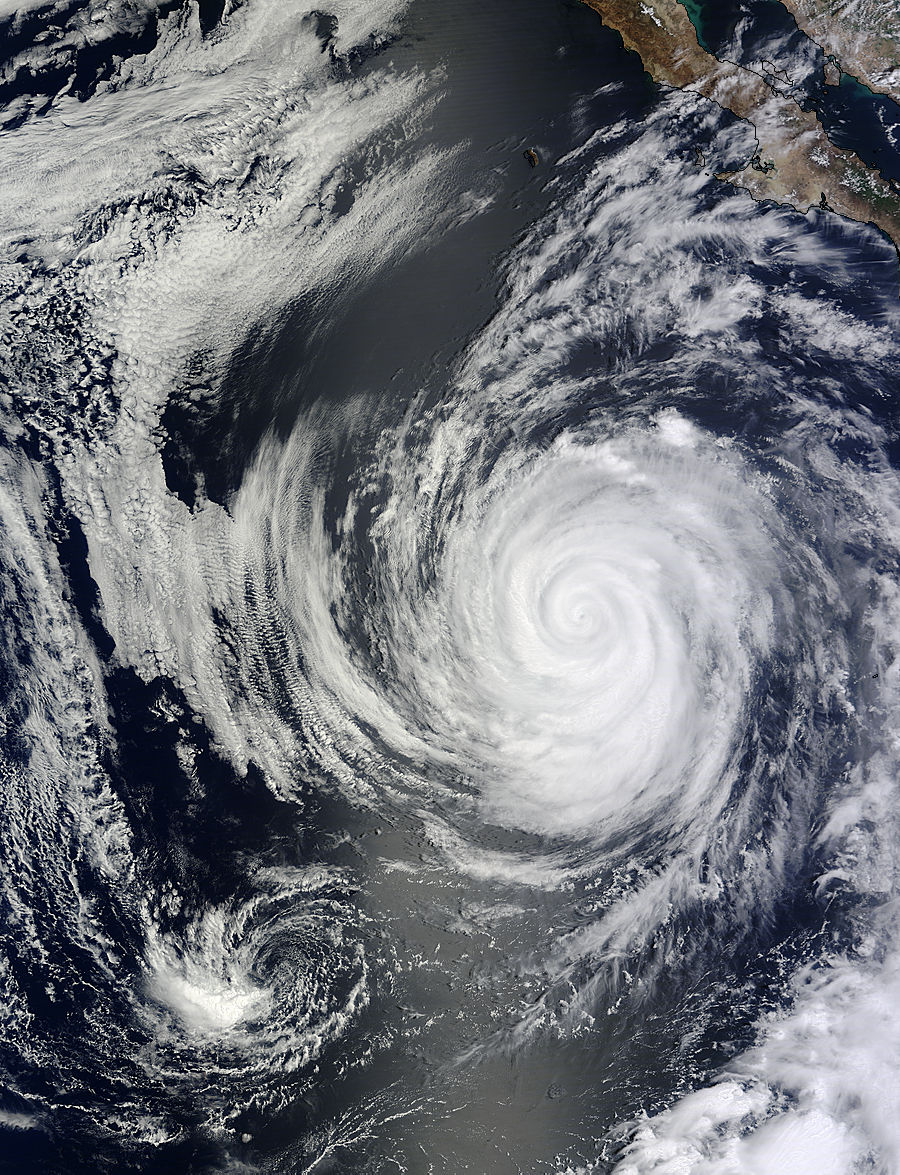 The Atmospheric Infrared Sounder aboard NASA's Aqua satellite gathered data on Marie when it passed overhead on August 27 at 10:14 UTC. An infrared image created from that data showed the coldest cloud top temperatures and strongest thunderstorms were around Marie's center and southern quadrant. 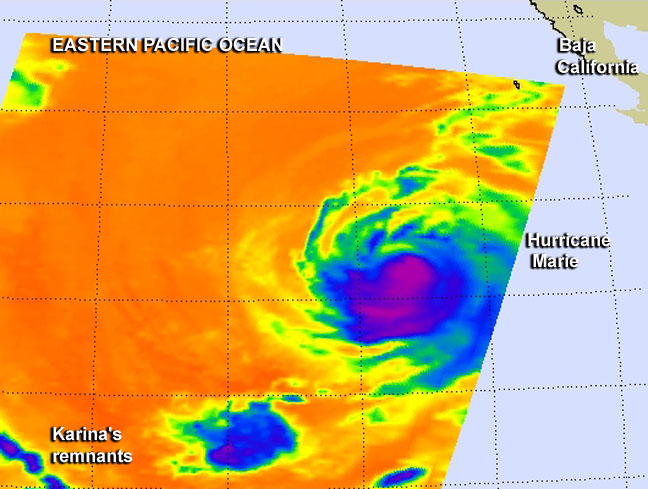 This infrared image of Hurricane Marie's cloud top temperatures on Aug. 27 at 6:14 a.m. EDT indicated the strongest (and coldest) thunderstorms were around the center and southern quadrant (in purple). Image credit: NASA JPL, Ed Olsen

Because of Marie's large size and its movement to the north, it is creating rough surf that is now reaching southern California's shoreline.

At 15:00 UTC today Marie's maximum sustained winds had decreased to near 75 mph (120 km/h) making it Category 1 hurricane. Marie was centered about 880 miles (1 415 km) west of the southern tip of Baja California, Mexico. Marie was moving toward the west-northwest near 14 mph (22 km/h) and is expected to turn to the northwest.

The system will be moving over progressively colder water and additional weakening is forecast during the next 48 hours. However, swells generated by Marie will continue to affect much of the west coast of the Baja California, the extreme southern Gulf of California and southern California through Thursday, August 28. Life-threatening surf and rip current conditions are likely as a result of these swells as well as minor coastal flooding.

Marie is expected to become a post-tropical cyclone by Thursday, August 28. 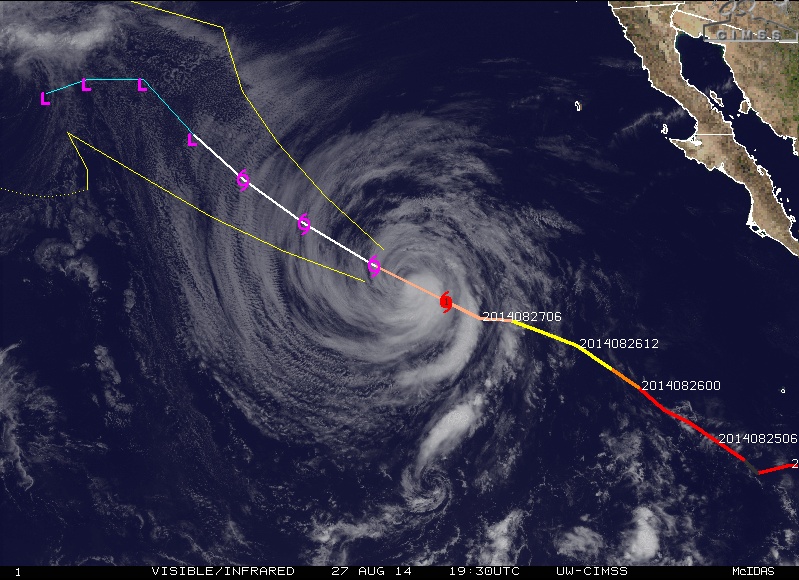