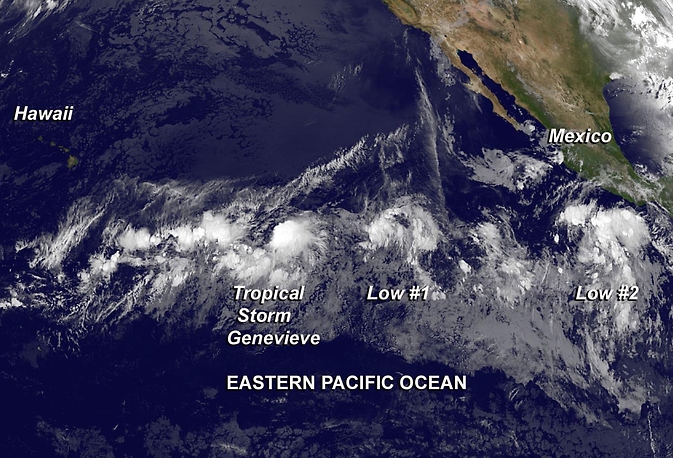 By Sunday, July 27 Tropical Storm Genevieve weakened to a tropical depression and National Hurricane Center (NHC) issued what they thought was their final advisory on the system as it was entering the Central Pacific. At 09:00 UTC that day, the depression was located about 1 130 miles (1 820 km) east-southeast of South Point, Hawaii. It was moving to the west near 9 mph (14.4 km/h) and had maximum sustained winds near 35 mph (55 km/h).

By Monday, July 28 at 12:00 UTC Genevieve became a remnant low pressure area located about 780 miles (1 255 km) southeast of Hilo, Hawaii. The Central Pacific Hurricane Center (CPHC) noted that this may not be the last of Genevieve, however, as "environmental conditions may be somewhat conducive for development of this system as it continues to move westward at about 10 mph (16 km/h) during the next couple of days." CPHC gave Genevieve's remnants a 30 percent chance of making a comeback in the next couple of days.

On July 30, after three days of living as a remnant low pressure area, Genevieve reorganized and was again classified as a tropical depression.

Infrared imagery from NASA's Aqua satellite helped confirm that the remnant low pressure area of former Tropical Storm Genevieve has become a Zombie storm, and has been reborn as a tropical depression on July 30. 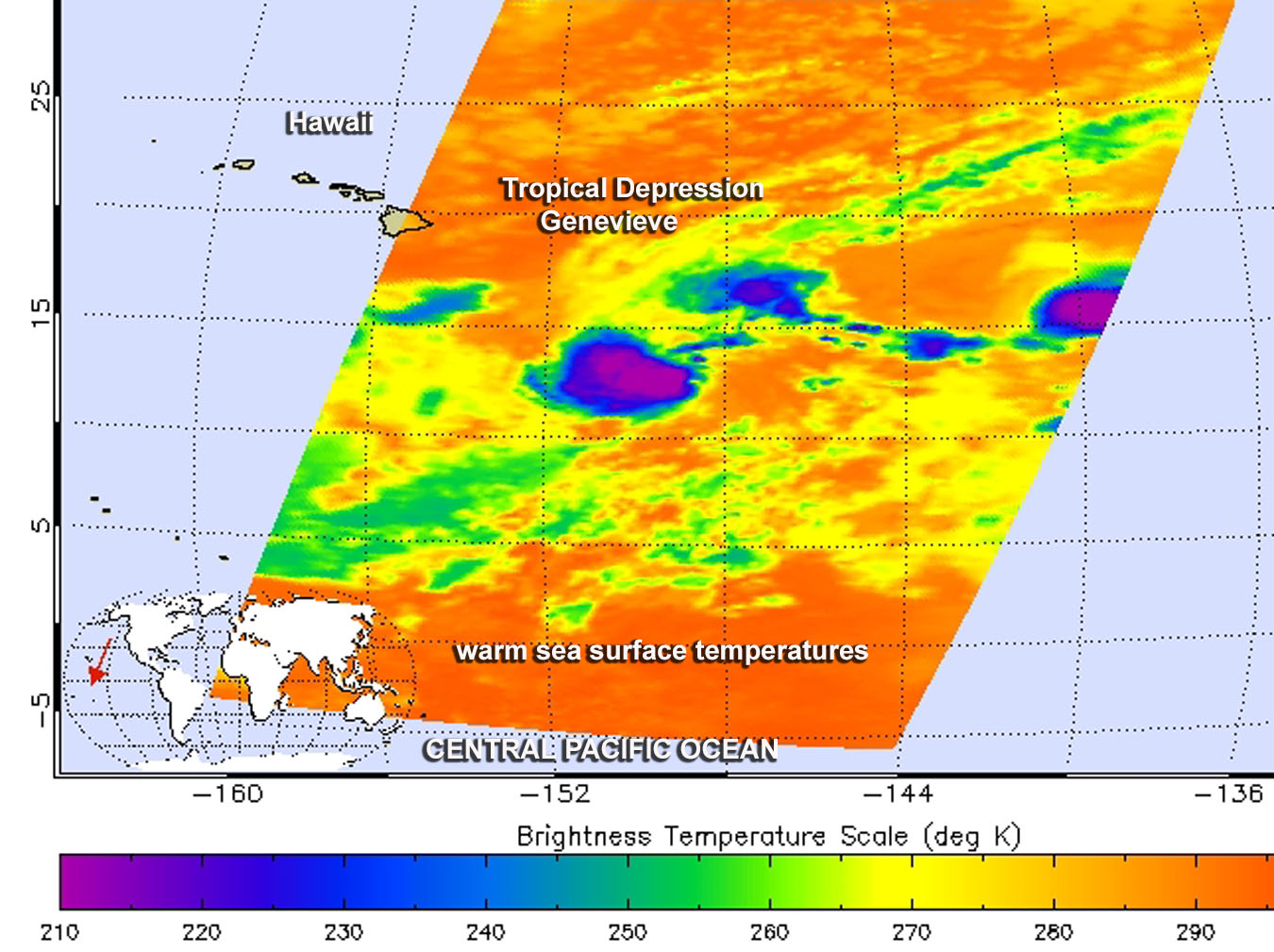 According to NOAA's CPHC, Genevieve's maximum sustained winds on that day were near 35 mph (55 km/h) and some strengthening was expected during the next two days, with Genevieve likely becoming a tropical storm within the next day.

By July 31, the resurrected Tropical Depression Genevieve appeared squeezed between three other developing areas of low pressure. Satellite data from NOAA and NASA continued showing a lot of tropical activity in the Eastern and Central Pacific Oceans. 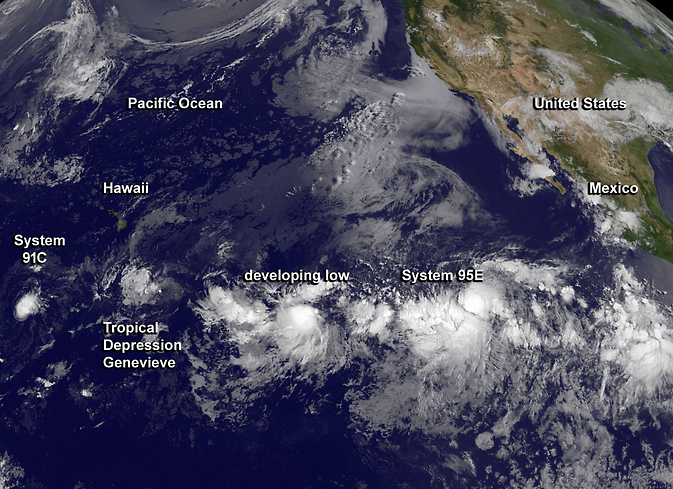 At 12:00 UTC on August 1, Genevieve's remnant low center was located about 500 miles (804 km) south-southeast of Hilo, Hawaii. CPHC noted the atmospheric conditions are only marginally favorable for its redevelopment over the next few days as it moves westward near 10 mph (16 km/h).

But on that day, there were 5 developing tropical systems in the Eastern and Central Pacific. All five of them are visible on the following NOAA GOES-West image (left to right) taken on August 1: System 91C, Genevieve, System 96E, Iselle, and a tropical wave. 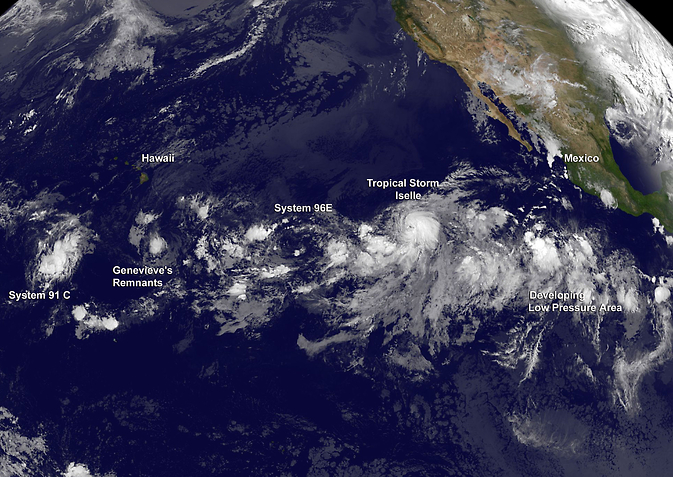 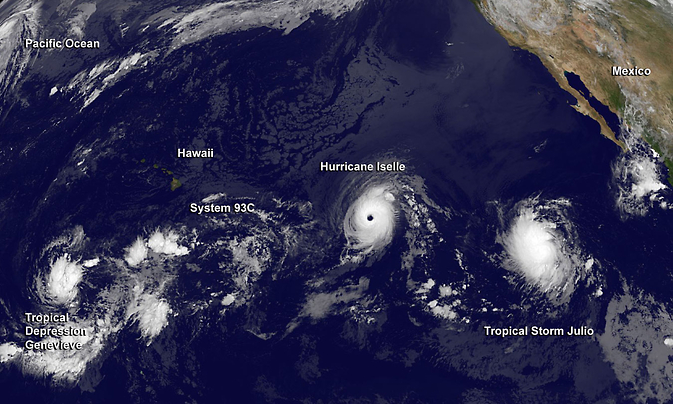 Genevieve strengthens into a hurricane, becomes a Super-Typhoon

Satellite data on Tuesday, August 5 showed that the structure of Genevieve has improved rapidly into a hurricane. At 15:00 UTC, the center of Tropical Storm Genevieve was located about 1 065 miles (1 710 km) south of Midway Island and about 555 miles (895 km) west-southwest of Johnston Island.

CPHC noted that Hurricane "Genevieve" was moving toward the west-northwest near 17 mph (28 km/h) and that this motion was expected to continue through Thursday. Maximum sustained winds were near 75 mph (120 km/h) and Genevieve was expected to become a typhoon in the west Pacific in the next day or two. 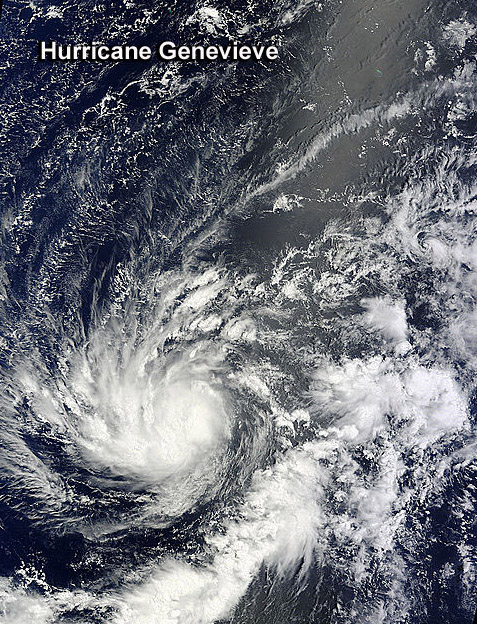 Finally, after many ups and downs, once the storm crossed the International Dateline in the Pacific on Thursday, August 7 it rapidly intensified into a Super-Typhoon. 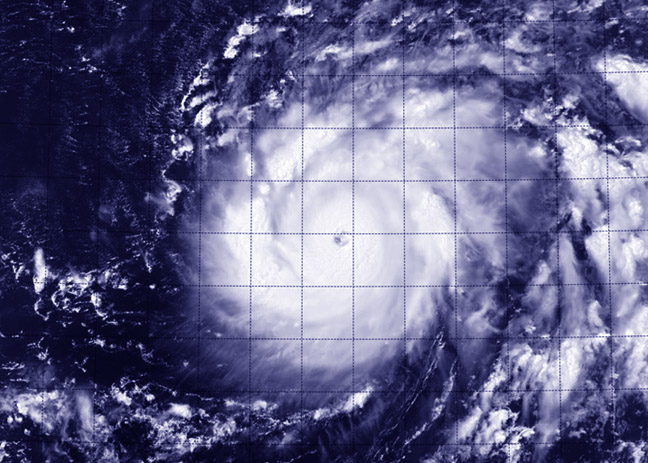 This visible image of Super-Typhoon Genevieve was taken from the VIIRS instrument aboard NASA-NOAA's Suomi NPP satellite on August 7 at 01:34 UTC. Image credit: NASA/NOAA

When NASA's Tropical Rainfall Measuring Mission or TRMM satellite passed over Genevieve that day, data showed that there was a band of thunderstorms over the southern quadrant of the storm some 60 nautical miles (69 miles/111 km) thick.

The forecast called for Genevieve to maintain super typhoon strength over the next day and a half as it turns from a west-northwesterly track to a more northerly track over open ocean.

It is now a tightly wrapped system with a 15 nautical miles (17.2 miles/27.7 km) wide eye. It is expected that Genevieve gradually weakens over the next three days but there is a high degree of uncertainty in the track forecast due to a complex steering environment. 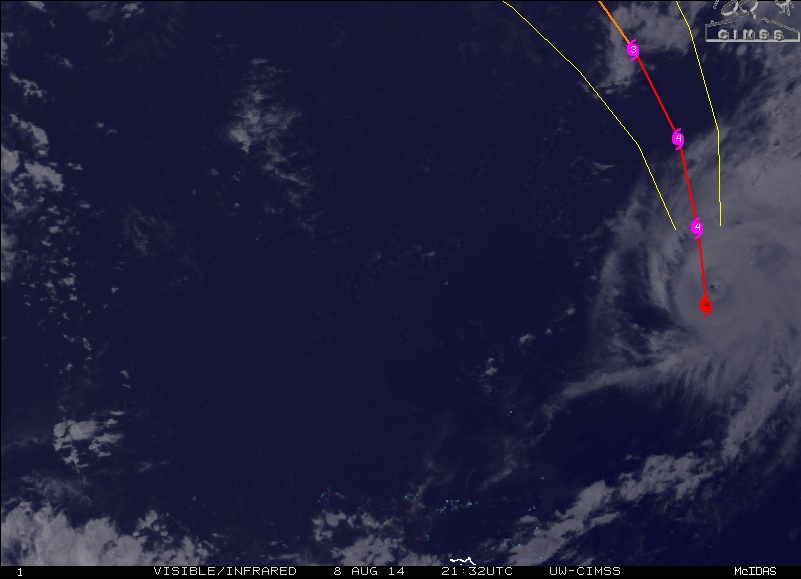