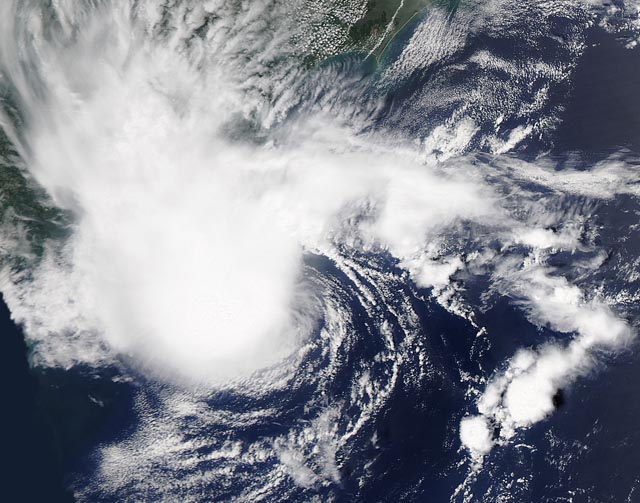 Tropical Storm Alberto, the first named storm of the 2012 Atlantic hurricane season, formed on Saturday, May 19, 2012 off the coast of South Carolina.

Alberto has the potential to hit North Carolina as early as Monday, but since the storm is so small, it would only affect a small area of the coast with high winds and heavy rain.

Upper level winds out of the southwest are creating a moderate 15 – 20 knots of wind shear over Alberto, and the storm is over the warm waters of Gulf Stream, which are 27°C (81°F), just above the 26°C threshold usually needed to sustain a tropical storm.

The system is tangled up with an upper level trough of low pressure, which is pumping cold, dry air into the storm, slowing development.

This year marks the first time in recorded history that a tropical storm has formed in both the east Pacific basin and Atlantic basin before the official start of hurricane season.

The following names will be used for named storms that form in the North Atlantic in 2012.