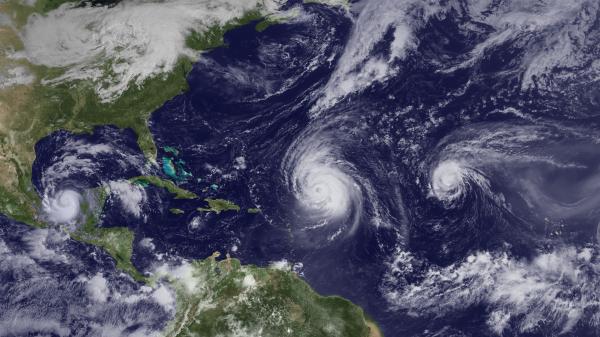 When Hurricane Katrina devastated New Orleans and other areas of the Gulf Coast five years ago this week, becoming the most economically destructive storm in history, it highlighted our vulnerability to the forces of Mother Nature.

Today a number of U.S. cities remain vulnerable to a major hurricane due to their geography and geology. Here are some of the cities most at risk:

The underwater geology of the Gulf of Mexico makes the Gulf Coast cities particularly vulnerable to hurricanes.

It’s the symmetry of the Gulf and the fact that you have a shallow, sloping continental shelf.  The gentle slope of the seafloor beneath the Gulf Stream means that storm surge — the water pushed toward land by the storm winds — is worse on the Gulf Coast than along other coasts.

And because the land along the Gulf Coast is relatively flat – and below sea level in some places – surges reach even farther inland. Of all of the hazards of hurricanes – winds, rain, storm surges – surges are what can cause the largest loss of life.

Of 12 major cities in Florida, Miami is the most vulnerable to hurricanes, said Jill Malmstadt, a researcher at Florida State University. In a recent study, Malmstadt used historical data on hurricane frequencies and wind speeds to apply a new theory (called “extreme value theory,” which estimates the occurrence of rare and extreme events) to hurricane prediction.

The researchers found that Miami can expect to see winds of 112 mph (180 kilometers per hour) or stronger — considered a category 3 hurricane — once every 12 years on average, more often than any other Florida city.

Malmstadt’s work will be published in the November issue of the Journal of Applied Meteorology and Climatology.

Coastal lands such as these, which are striped with rivers, creeks and inlets, are vulnerable to the pounding effects of waves as well as to storm surges, Brennan said. The narrow waterways along the Atlantic shore allow water to be funneled farther inland than unbroken coastlines allow.

And cities don’t have to take a direct hit by hurricanes to feel the effects, Brennan said. For example, Hurricane Isabel was already weakening considerably when  it made landfall, but it still created a storm surge, he said.

Storm surges bring more water onto land than waves tend to do.

These cities are at risk mainly because they have large populations that are not often affected by hurricanes. Compounding this lack of preparedness is the fact that storms tend to move quite fast once they reach these areas.

Storms start interacting with the jet stream and they accelerate as they gain latitude — that is, move northward. The 1938 hurricane that struck New York was a devastating example of this.  It was in North Carolina in the morning and in Long Island by the afternoon.

This speed means that large metropolitan populations, relatively unaccustomed to hurricanes, need to start making plans and heading out of town while the skies are sunny. (LifeLittleMysteries)