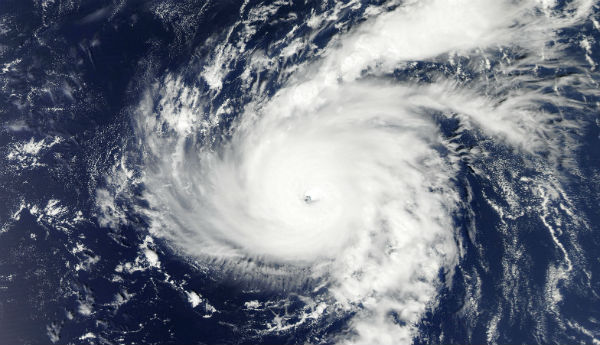 A relative active 2012 Atlantic Hurricane Season produced 19 named storms with 10 hurricanes. This year had 7 storms more than the historical average. Atlantic hurricane season started  officially with June 1, and it ends on November 30, 2012. This season started off early with Alberto and Beryl appearing in May, Isaac in the Gulf Coast, and in October, Sandy caused destruction throughout the Northeast. The only major hurricane this season was Hurricane Michael, a Category 3 storm that stayed over the open Atlantic. The last named storm was Tropical Storm Tony which dissipated on October 25, 2012.  NOAA classifies this season as above-normal. 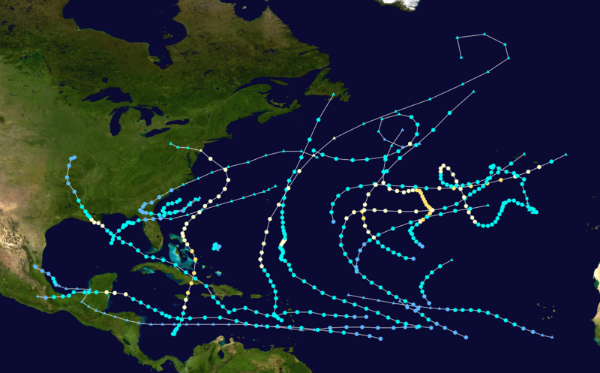 Track map of all storms of the 2012 Atlantic hurricane season. The points show the location of the storm at 6-hour intervals. (Created by Cyclonebiskit using Wikipedia:WikiProject Tropical cyclones/Tracks. The background image is from NASA. Tracking data Tracking data from the National Hurricane Center’s running best track files.)

More than half of the tropical cyclones that developed in the season made landfall. Hurricanes Sandy and Isaac were the deadliest and most destructive. This season claimed at least 320 lives and caused at about $68 billion in damage, making it the deadliest since 2008, and the costliest since 2005.

High activity for Atlantic hurricanes began in 1995, since when, more than 70% of seasons have been above normal, including this one. 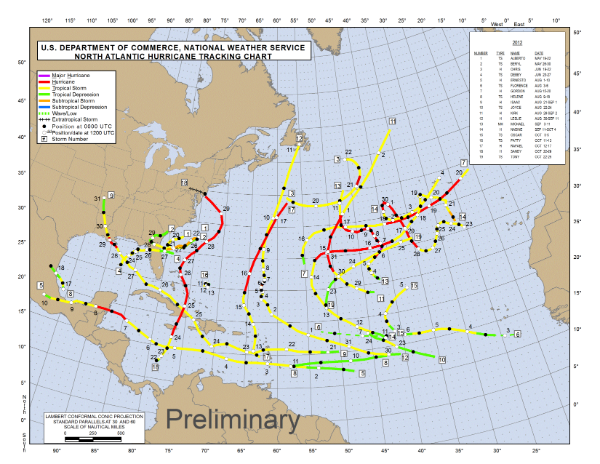 NOAA released animations of GOES East satellite imagery recorded from June 1 until November 28, 2012. After problem with GOES-13 imager in September, NOAA  transitioned GOES East from the GOES-13 to the backup GOES-14 satellite. GOES-13 returned to service again in mid-October.

Newly launched Suomi-NPP satellite provides more accurate measurements of atmospheric properties to better predict storm intensification and movement. It was included into the operational forecast models during the 2012 season.

“We are hopeful that after the 2012 hurricane season, more families and businesses all along the Atlantic and Gulf Coasts become more “weather ready” by understanding the risks associated with living near the coastline.  Each storm carries a unique set of threats that can be deadly and destructive. Mother Nature reminded us again this year of how important it is to be prepared and vigilant.” Laura Furgione, acting director of NOAA’s National Weather Service

Timeline of the 2012 Atlantic hurricane season

Featured image: Hurricane Michael at peak intensity on September 6, 2012, as a low-end Category 3, currently the strongest storm of the season. (Credit: LANCE/MODIS)