Tokyo VAAC reported that ash plumes from Tolbachik reached heights of 3.5 km. The MODVOLC also detected thermal anomalies and a strong S02 output is seen. On November 29, the KVERT reported that the fissure had opened up in two places (in the southern cone area); the first is located 4.5 km from Tolbachik and contains 4 or 5 eruptive vents, the second is located 6.5 km downstream from the volcano and has 2 or 3 eruptive vents. Ground observers reported that the eruption started as a series of small eruptions that progressed into two fissures. Explosions were heard in Kosyrevsk (40 km west), Maiskoye (56 km northwest) and even Klyuchi (70 km north).

This strong eruption is leading some to ask whether or not Plosky Tolbachik may become the next Eyjafjallajökull as its spewing of ash and lava intensifies.  Icelandic volcano Eyjafjallajökull caused the shutdown of several airports throughout Europe, which led to global disruption across many industries back in 2010.

On November 30, 2012 at 01:53 UTC VONA/KVERT issued their weekly report on current status of volcanoes they observe.

For Plosky Tolbachik volcano their latest report said that explosive-effusive eruption of the volcano continues. Ash explosions up to 19,700 ft (6 km) a.s.l. could occur at any time. Activity of the volcano could affect low-flying aircraft. 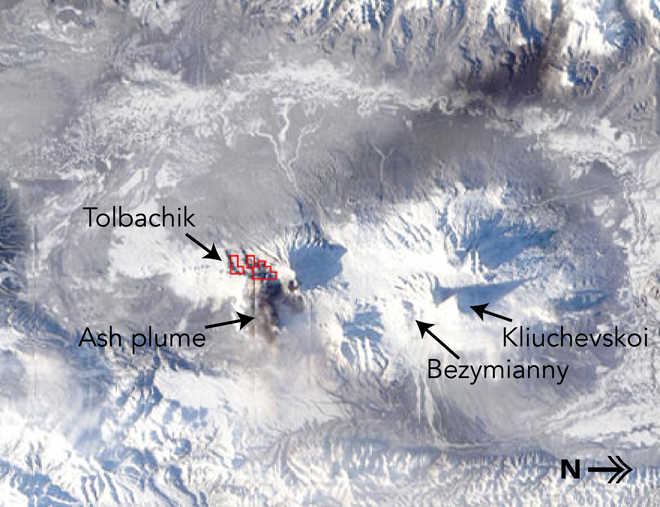 The massive Tolbachik basaltic volcano is located at the southern end of the dominantly andesitic Kliuchevskaya volcano group. The Tolbachik massif is composed of two overlapping, but morphologically dissimilar volcanoes. The flat-topped Plosky Tolbachik shield volcano with its nested Holocene Hawaiian-type calderas up to 3 km in diameter is located east of the older and higher sharp-topped Ostry Tolbachik stratovolcano. The summit caldera at Plosky Tolbachik was formed in association with major lava effusion about 6500 years ago and simultaneously with a major southward-directed sector collapse of Ostry Tolbachik volcano. Lengthy rift zones extending NE and SSW of the volcano have erupted voluminous basaltic lava flows during the Holocene, with activity during the past two thousand years being confined to the narrow axial zone of the rifts. The 1975-76 eruption originating from the SSW-flank fissure system and the summit was the largest historical basaltic eruption in Kamchatka (GVP).