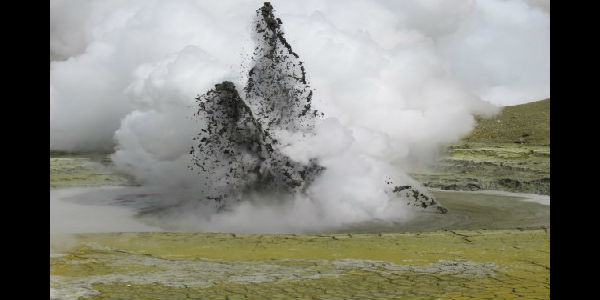 Explosive-effusive eruption continues at Tolbachik with  fluid lava continues to effuse from the southern fissure and the flows advance on the southwestern flank of the volcano. Plumes of steam and some ash continue to reach up to about 4 km (13,000 ft) altitude.

Strong seismicity of the volcano was registered with volcanic tremor amplitude reached 7.6 mcm/s. A big thermal anomaly was observed on satellite images at the northern area of Tolbachinsky Dol. Moderate seismicity was registered at Shiveluch.

Moderate seismic activity was also registered at Kizimen volcano. A new lava flow extrudes from the summit on the north-eastern flank of the volcano with incandescence of the volcano summit, hot avalanches and strong gas-steam activity. 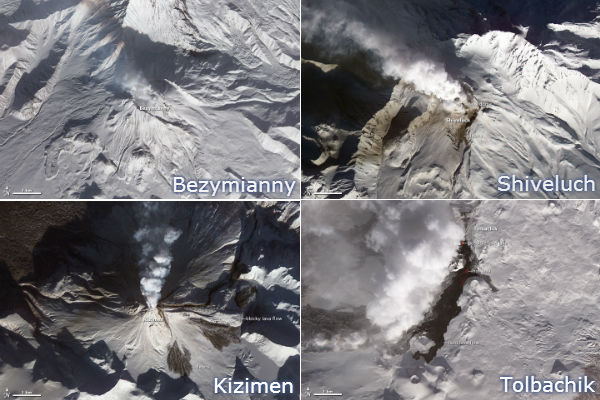 Shallow M5.1 earthquake occurred 31 km southwest of Tanaga volcano at Aleutian arc on January 21, 2013 at depth of 7km. It is visible as the large event with aftershocks on the attached TAZE seismic record.

INSIVUMEH reported an increase in lava effusion after several days of relatively weak activity at Guatemalan Santa Maria/Santiaguito volcano. The lava flows descending from the dome on the S, SE and NE side are advancing 5-7 meters per day. The SE flow enters the gulley of Rio Nimá I. Some weak to moderate explosions are still going on.

Volcanic earthquakes and small rockfalls continue at Colima volcano in Mexico.  Emissions of gas and ash remain subdued at Popocatepetl volcano, occurring at an average rate of one event every one to two hours.

After six months of inactivity, Chilean stratovolcano Villarrica seems to have woken again. Weak explosive activity deep within the summit crater has resumed during last 2 weeks as evident in terrestrial and satellite observations. Observations also indicate that magma might have begun to rise again within the volcano. Villarrica rises above the resort town of Pucón.

There were reports about new eruption at Puyehue Cordon-Caulle volcano in Chile, however, the observed ash plume originated from very vigorous remobilization of ash deposits on the volcano due to weather conditions in the area. 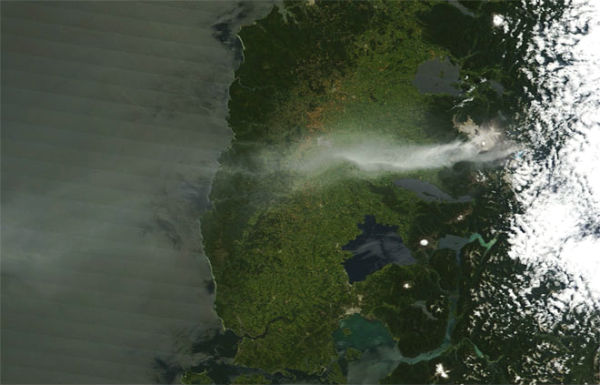 Satellite image of remobilized ash from Puyehue-Cordón Caulle taken on January 19, 2013 by MODIS/Terra. Some of this ash has fallen on Osorno in Chile, to the east of the volcano. (Credit: LANCE/MODIS)

PHILVOLC reported an increase in volcanic earthquakes at Taal volcano in the Philippines. Ten earthquakes were recorded on January 21/22, 2013.

New explosive activity has caused a closure of the airport near the Tavurvur cone of Rabaul volcano in New Britain region of Papua New Guinea. The ash and volcanic gases with steam plumes rising upwards of 500 meters are reported. Watch the live footage of Tavurvur erupting on January 20, 2013.

The latest report on White Island's Tongariro volcano in New Zealand mentioned new, vigorous and almost continuous hydrothermal activity in the small crater lake at White Island. This activity is the strongest it has been since the events that lead to the explosive activity in 2000, so GNS Science is concerned about the increasing potential of explosions in the White Island crater.

The elevated activity corresponds to the increased tremor signal recently visible. The video below was filmed by Brad Scott of GNS Science, on a routine volcano monitoring trip to White Island on January 21, 2013.