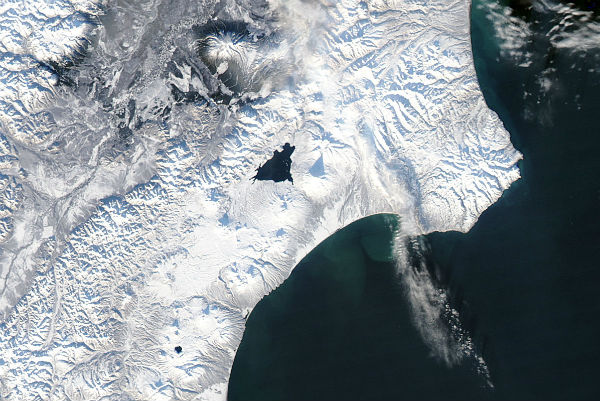 Explosive eruption at the Tolbachinsky Dol continues. Tolbachik’s cinder cone grows on the southern fissure and gas-steam with ash column rose up to 4 km, according to latest reports by VAAC Tokyo and VONA/KVERT. Ash plume extends 5 km in ESE direction from volcano. Very fluid lava is moving to the western side of Tolbachinsky Dol. Lava flow from northern fissure covered Stationar of IVS FED RAS.

The Plosky Tolbachik volcano, in Russia’s far eastern Kamchatka peninsula, violently awoke in late November, 2012, when it shot clouds of ash almost 10,000 feet (about 3,000 meters) into the sky. The eruption took place on November 27, 2012 after 35 years of calm. The lava flows destroyed two nearby scientific camps, and nearby villages took precautions against further eruptions by closing schools. 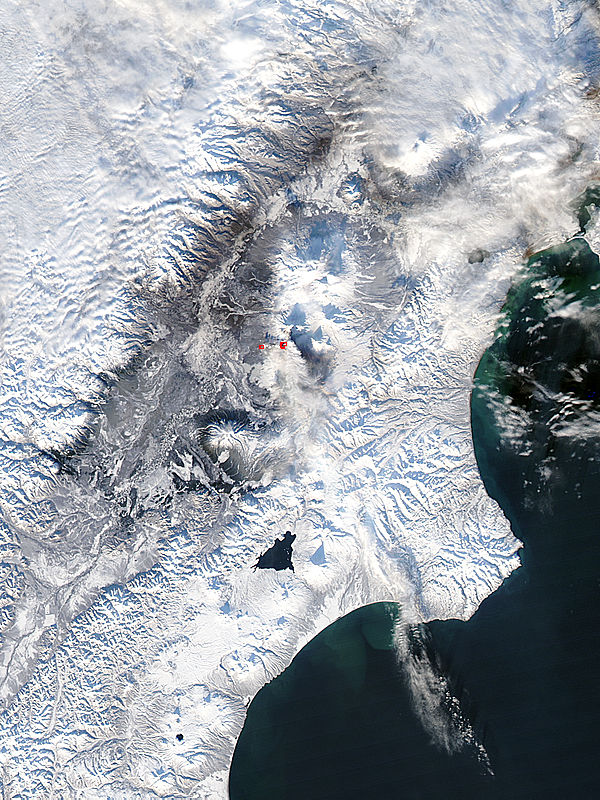 Tolbachik is a shield volcano—a low-profile, broad structure with a shape resembling an ancient warrior shield. The volcano has a complex configuration, and the eruptive activity in late November reportedly occurred around the southern cone. Reports described eruptions from two fissures, a volcanic ash plume reaching 3 kilometers in altitude, and emissions of sulfur dioxide. Tolbachik’s last known eruption occurred in 1976, according to the Global Volcanism Program at the Smithsonian.

The Moderate Resolution Imaging Spectroradiometer (MODIS) on NASA’s Terra satellite detected unusually high surface temperatures and an apparent ash plume on November 29 (right image). For comparison, the left image shows the volcano before any obvious activity occurred. The red outlines in the November 29 image approximate the areas with high surface temperatures associated with volcanic activity. In both images, volcanic peaks cast long shadows to the north, thanks to the low angle of the Sun. By the time MODIS observed the region on November 29, the volcano had released a dark brown ash plume that settled on the snow. (NASA images courtesy Jeff Schmaltz, LANCE MODIS Rapid Response. Caption by Michon Scott)

Volcanologist Erik Klemetti of Denison University remarked that, although the volcano showed signs of an eruption similar to what it experienced in the 1970s, “the magnitude of this new eruption is still very unclear.” Tolbachik is one of numerous volcanoes on the Kamchatka Peninsula, part of the Pacific “Ring of Fire” where earthquakes and volcanic activity occur frequently.

The massive Tolbachik basaltic volcano is located at the southern end of the dominantly andesitic Kliuchevskaya volcano group. The Tolbachik massif is composed of two overlapping, but morphologically dissimilar volcanoes. The flat-topped Plosky Tolbachik shield volcano with its nested Holocene Hawaiian-type calderas up to 3 km in diameter is located east of the older and higher sharp-topped Ostry Tolbachik stratovolcano. The summit caldera at Plosky Tolbachik was formed in association with major lava effusion about 6500 years ago and simultaneously with a major southward-directed sector collapse of Ostry Tolbachik volcano. Lengthy rift zones extending NE and SSW of the volcano have erupted voluminous basaltic lava flows during the Holocene, with activity during the past two thousand years being confined to the narrow axial zone of the rifts. The 1975-76 eruption originating from the SSW-flank fissure system and the summit was the largest historical basaltic eruption in Kamchatka. (GVP)