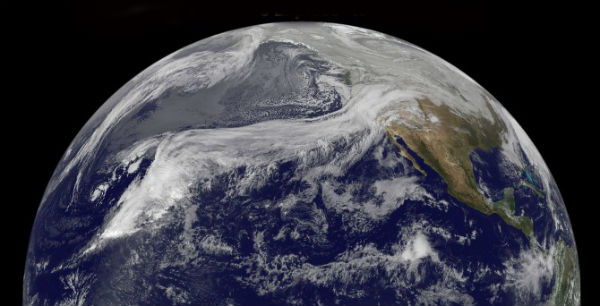 River of moisture streams across the entire Pacific basin and heads toward the U.S. coastline. Over the first week of December 2012, over a foot of rain is expected to fall in parts of Northern California and up into British Columbia.

This animation bellow shows the total precipitable water in the atmosphere for November 28 – December 6, 2012 using the NOAA Global Forecast System model – one of the main weather models used by forecasters across the world. (Dark blues are areas of high moisture content in the atmosphere. The large “tongues” of moisture can be seen extending thousands of miles across the ocean.)

Atmospheric Rivers (AR) are responsible for most of the horizontal transport of water vapor outside of the tropics. Atmospheric rivers can create extreme rainfall and floods. However, not all ARs cause damage – most are weak, and simply provide beneficial rain or snow that is crucial to water supply. ARs move with the weather and are present somewhere on the Earth at any given time.

On average, about 30-50% of annual precipitation in the West Coast states occurs in just a few AR events, thus contributing to water supply. ARs can create major flooding when they make land-fall and stall over an area. ARs are a primary feature in the entire global water cycle, and are tied closely to both water supply and flood risks, particularly in the Western U.S.

A strong AR transports an amount of water vapor roughly equivalent to 7.5–15 times the average flow of liquid water at the mouth of the Mississippi River. On average ARs are 400-600 km wide. 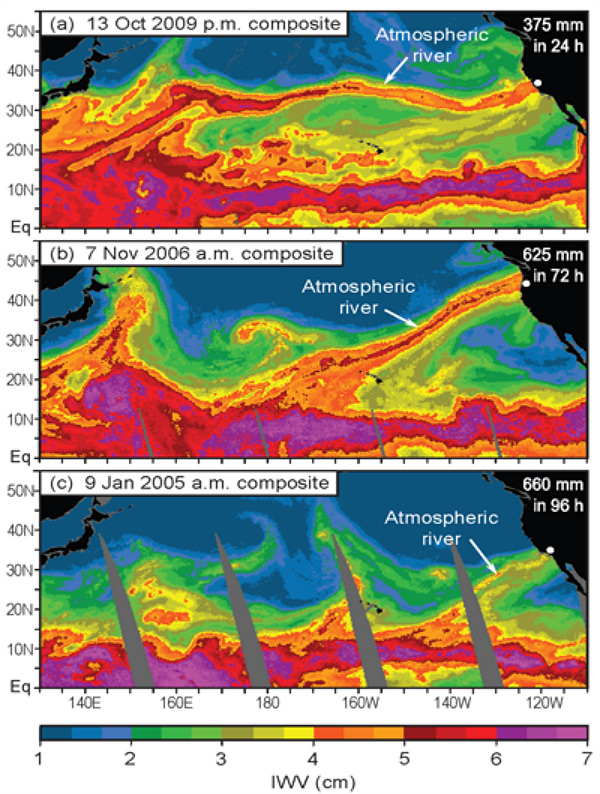 Three examples of AR events that produced extreme precipitation on the US West Coast, and exhibited spatial continuity with the tropical water vapor reservoir as seen in satellite observations of integrated water vapor. The color scale used in these images represents the total amount of water vapor between the ocean surface and space. (Credit: NOAA/ESRL)

ARs are the water-vapor rich part of the broader warm conveyor belt, that is found in extratropical cyclones. They result from the action of winds associated with the storm drawing together moisture into a narrow region just ahead of the cold front where low-level winds can sometimes exceed hurricane strength. The term AR was coined in a seminal scientific paper published in 1998 by researchers Zhu and Newell at MIT. Because they found that most of the water vapor was transported in relatively narrow regions of the atmosphere (90% of the transport occurred typically in 4-5 long, narrow regions roughly 400 km wide), the term atmospheric river was used.

National Weather Service forecasters located along the West Coast are now familiar with the concept of atmospheric rivers and can identify these phenomena in current numerical forecast models. This provides them the capability to give advanced warning of potential heavy rain sometime 5 to 7 days in advance. They have also learned to monitor polar orbiter microwave satellite imagery that provides advanced warning of the presence and movement of these phenomena in the Pacific. During the last two winters, with the development of atmospheric river observatories, forecasters have been able to monitor the strength and location of these rivers as they make landfall and thus improve short-term rainfall forecasts for flash flooding. There are still challenges to predicting rainfall totals in these events as models still struggle with the details of the duration and timing of AR’s as they make landfall. 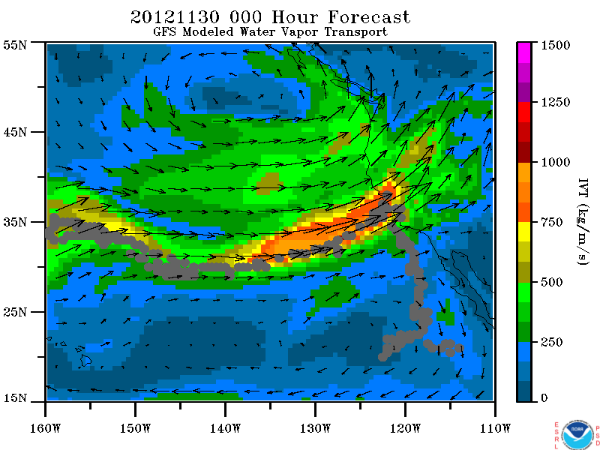 Details about some major AR events