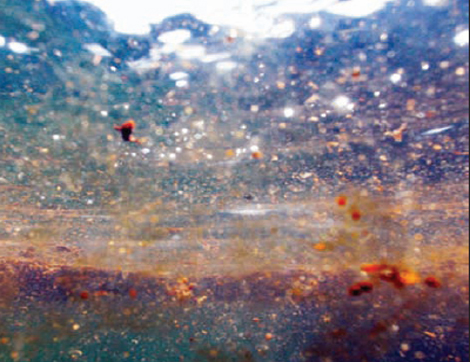 Recent news reports confirm what many have alleged for over a year: British Petroleum’s “Macondo” well site has never stopped leaking.

The mainstream media blackout on this subject is keeping the public unaware of the continuing tragedy and preventing another communal outcry for accountability from the government as well as Big Oil.

AFP has followed this story closely and can now confirm that not only was the Deepwater Horizon incident under-reported in scope, this botched drilling job continues to destroy the food supply, ecosystem and human lives each day.

This reporter has been communicating with a source from the Gulf Oil Spill Remediation Conference who said in April that the Gulf of Mexico is the “most fractured seafloor in the world.” Now, this insider has gone further, saying that the ocean floor will “leak forever unless the Earth can seal itself with an earthquake.”

The source, who requested anonymity for personal safety, directed this reporter to an article at Global Research in which the case for multiple and multiplying leaks is made with expert scientific precision. The article states that when the well was capped, “putting the system back under pressure forced the upsurging hydrocarbons to find weaknesses throughout the greater system, which revealed all sorts of compromised, fractured and unsettled geology.”

It went on to report: “Under high pressure it will find every point of egress through the rock and sediment formations all the way up to the seafloor where it will find any point of exit that is available. The longer and more forcefully that it flows throughout the fractured area, which is dependent on the volume, temperature and pressure at the source of the hydrocarbons, the more its corrosive effects will widen, broaden and enlarge the channels, cracks and crevices throughout the sub-seafloor geology, thereby creating a predicament that no science, technology or equipment can remedy.”

Bonny Schumaker, founder of On Wings of Care, recently wrote about her flyover of the gulf region. On Aug. 19, she reported: “Today we flew about 500 miles over the gulf to check out yet more reports of oil. We didn’t even get to some of the places reported, because in just a few hours we had already found plenty in at least four distinct locations—all within 75miles of the shores of Louisiana.”

She continued, “We found significant amounts of oil in globule form still at the Deepwater Horizon site and at the Taylor Energy site, and we saw miles-long surface rainbow sheens from two different leaking platforms between

When this reporter asked her about leaks in the gulf’s seafloor, Ms. Schumaker discussed how often she sees oil residue when flying over the gulf. She said, “If BP

On Aug. 25, The Mobile Press-Register stated that it collected the samples and had them tested by chemists Ed Overton and Scott Miles at Louisiana State University, who “did much of the chemical work used by federal officials to fingerprint the BP oil, known as MC252.”

The story quoted Overton as saying, “After examining the data, I think it’s a dead ringer for the MC252 oil, as good a match as I’ve seen.”

All of this validates what this reporter and AFP have been covering for months. It seems conclusive that even if the actual drill site of Deepwater Horizon has been sufficiently capped, the damage done by BP with U.S. government approval is too extensive to be stopped. The size of the Macondo well and its explosive pressure has been unleashed, breaking through the surface at every point of least resistance, poisoning the gulf with every passing moment.

Frank Whalen has been a radio talk show host for the past 17 years, and worked as a consultant for Maxim magazine. For more news and views from Frank, see www.franklyspeakingradio.com.