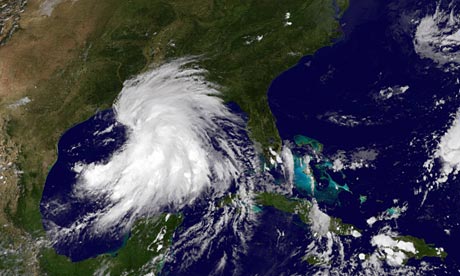 Tropical Storm Lee is bringing heavy rains to parts of the northern coast of the Gulf of Mexico, according to the National Hurricane Center in Miami. Tropical Storm Lee is centered at latitude 28.2 north and longitude 91.6 west, about 165 miles west-southwest of the mouth of the Mississippi River and about 150 miles southeast of Cameron, La., It has maximum sustained winds of 45 mph and is moving north at 5 mph. Its minimum central pressure is 1,000 millibars or 29.53 inches.

Heavy rains will pound some areas along the Gulf Coast, with some forecast to receive up to 20 inches.

Louisiana Gov. Bobby Jindal declared a state of emergency in 10 parishes and urged residents to pay attention to the weather and flash flooding warnings.

In New Orleans, much of which sits below sea level, Mayor Mitch Landrieu took similar measures. The storm will test the levees rebuilt after Hurricane Katrina pounded the region six years ago this week.

The city is likely to see 8 to 10 inches of rain in the next few days, according to Landrieu, who urged residents to “prepare for the worst and let’s hope for the best” as the storm inched toward land.

Residents should use this opportunity to ensure they have an evacuation plan that includes drinking water, nonperishable food supplies and emergency medication, the governor said.

Lee comes about a week after Hurricane Irene pounded the East Coast, killing more than 40 people and leaving millions without power.

It was unclear whether Hurricane Katia, another storm swirling in Atlantic, could endanger the United States.

The slow-moving Lee could bring winds of 65 mph when it makes landfall this weekend, according to CNN meteorologist Sean Morris.

The current track suggests a possible landfall west of Morgan City on Sunday morning, Morris said. It was about 95 miles away from the Louisiana city early Saturday.

The storm was gaining strength early Saturday and inching northward at 5 mph. About 2 a.m. ET, it was 170 miles west-southwest of the mouth of the Mississippi River and had winds of 50 mph, the Hurricane Center reported.

Parts of southern Louisiana, Mississippi and Alabama could see 10 to 15 inches of rain by Sunday, with isolated totals of 20 inches, according to the hurricane center.

Some oil producers began evacuating employees ahead of the storm. About half of oil production in the Gulf and a third of natural gas production have been shut down, according to the Bureau of Ocean Energy Management, Regulation and Enforcement.

In Biloxi, Mississippi, public works crews were working to clean storm drains and catch basins on streets prone to flooding ahead of the expected storm.

“This will be an extreme multi-day rain event, and there will be issues with localized flooding,” said Sgt. Milton Houseman, the city’s emergency manager. “The good news is that, at this time, with the projections we’ve seen, we don’t expect any issues with river flooding, because the rivers are low.”

In addition to expected flooding and storm surge, the weather is threatening to ruin Labor Day weekend for thousands of beach-goers.