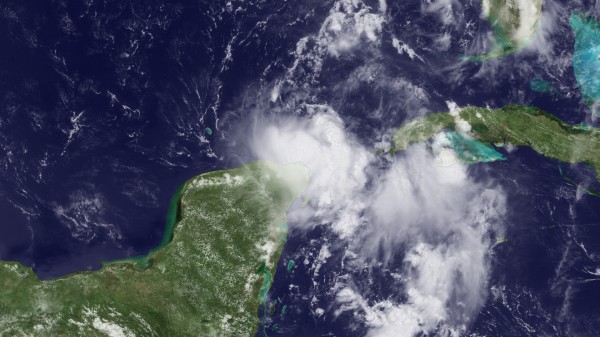 The strong tropical wave that emerged off the coast of Africa over a week ago has become the next named system in the Atlantic Basin while taking a path toward Texas. With the system away from Cuba, slowing its forward speed over the deep warm water of the northwestern Caribbean, there is room for organization and then intensification. The Don is forecast to track through the western Gulf of Mexico tonight into Friday, and could reach minimal hurricane status along the way.

Without cool water or disruptive wind shear (strong winds high in the atmosphere) ahead of the system to bring about its demise, it is inevitable that Don will make landfall after it enters the western Gulf of Mexico. The key to the system’s track will be the strength of the Bermuda high pressure which is nosing westward across Florida into the northern Gulf of Mexico. If the high pressure area maintains its strength, the system will be forced toward South Texas or northern Mexico. Weakening high pressure area would open the door for the system to target the northwestern Gulf Coast.

Heavy rain and strong, gusty winds would accompany Don wherever it moves inland as well as areas nearby. With the landfall of any tropical storm or hurricane, there is the risk of flash flooding and loss of life. However, the prospect of drenching rain is definitely news Texas residents want to hear. Most of coastal Louisiana and Texas are suffering from an extreme to exceptional drought. 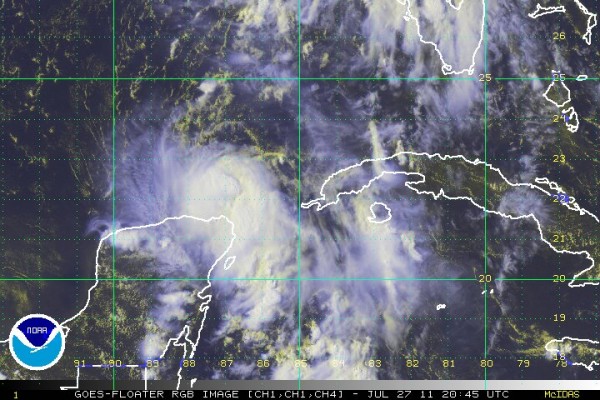 The area of disturbed weather created by a strong tropical wave has become tropical storm Don. Tropical storm Don is located near 22.2 north latitude, 87.0 west or 76 miles north of Cancun Mexico and 755 miles east southeast of Corpus Christi. Maximum sustained winds are near 40 mph. The storm is moving west northwest at 12 mph. The storm should slowly intensify during the next couple of days and should approach hurricane strength as it moves into coastal Texas Friday night.

Current projections suggest landfall between Corpus Christi and Freeport Texas. However, model output has been very inconsistent on this system the past two days. So, all interests along the Texas coast and northeast Mexico should monitor the progress of this tropical storm.

Elsewhere across the Atlantic Basin, we see no support for development through at least Friday, with a couple of weak waves moving across the central and eastern Atlantic. (…) 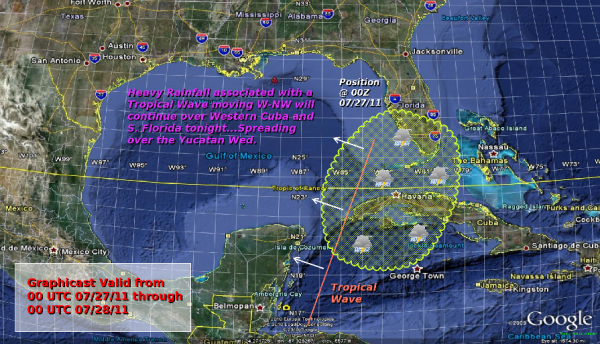 Even a strong tropical storm or minimal hurricane acts like a giant plunger, generating waves that propagate outward. As these rolling waves reach the beach, they break, pushing water onshore. In turn, some water must flow back out to sea. This outflow organizes into narrow channels, called rip currents. Most often these channels are present just off small points of land on the beach or near jetties.

The wave action will increase until the system moves inland and weakens. However, waves and rip currents in some areas will remain strong through the weekend.

It can take a while for a distant storm’s waves to reach some areas. Therefore, some areas may not experience problems, until the system has already made landfall.

The expected building seas in the Gulf of Mexico will also lead to problems for small craft and will raise concerns for energy rigs in the vicinity of the developing storm and areas in its path.

According to ripcurrents.com, over 100 people drown and tens of thousands of others struggle in rip currents each year in U.S. waters. Don’t become one of those statistics. Head warnings, obey rules and stay alert for changing surf conditions. (AccuWeather)