TheExtinctionProtocolsite identified four areas on the Pacific Plate that have been a source of an inordinate amount of recent strong earthquake activity in the Pacific Ring of Fire in post named "Catastrophism in the Ring of Fire: seven 6.0+ earthquakes in eight days". 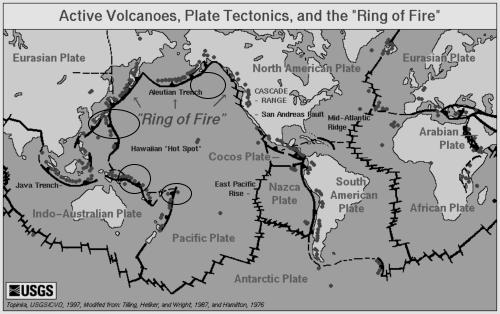 Seven 6.0+ magnitude earthquake events took place in eight days.  According to site, this spike in activity portends that a major geological event may be in the making in the Pacific. In June, it indicated that there was mounting evidence that we may be moving towards a period of geologic catastrophism in regard to rising agitation along the Pacific Plate. The 4 areas  circled on the above map include the Aleutian peninsula or trench of Alaska, the Japan Islands, the New Guinea and Fiji region, and the last leg is the Tonga-Kermadec and New Zealand region. What all these regions on the Pacific Plate have in common is that they are densely populated with a turbulent chain of volcanoes.

Since the western part of the plate is facing the most seismic stress, this leads it to believe the forces driving this are magmatic in nature and are the result of a thermal flux related to the internal planetary gradient. In short, if this whole region was a volcano, it’s now exhibiting signs of a major eruption. The sea-floor under the Atlantic Ocean is spreading and there is a lot of subduction going on in the Pacific where land masses are converging in some case but what’s alarming is something may be accelerating this process.