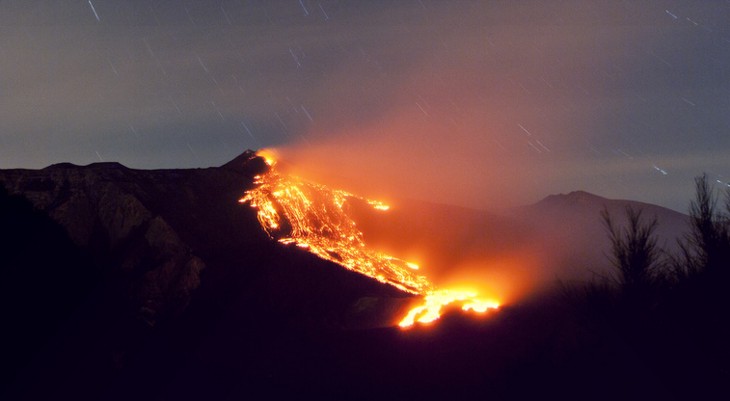 Mount Etna erupted for the eighth time this year. The progress of the eruption has been always the same: starting from a weak strombolian activity, turning into a lava fountain, reaching almost 500 meters and the lava following the line of the previous paroxysms, flowing inside Valle del Bove.

An this a second video shot on July 30.  It is a PassioneEtna video with a lot of video footage from another angle and with more than fire fountains.

The month of July 2011 was characterized by a marked increase of the eruptive activity of Etna, with four episodes of paroxysmal crater located on the eastern flank of the cone of South-East Crater (CSE), and a short phase of Strombolian activity and intracraterica effusive in Bocca Nuova (BN), the first major magmatic activity of this crater for 10 years. Throughout the month, there was a strong degassing from the Northeast Crater (NEC), where they keep the usual explosions deep inside the ear.

During the first days of July, we observed the usual fumarolic activity from a wide area high on the eastern side of the old cone of CSE, whose last eruption dates back to climax activities of 6-7 in May 2007. On the 5th July, began a weak Strombolian activity inside the new crater (formerly “crater pit” or “pit crater”), which is located on the eastern flank of the old cone, which has continued over the following days, for intensified during the night between 7 and 8 July. This increase was accompanied by a sudden increase in volcanic tremor amplitude, but after 0800 hours GMT (local time = -2), is the amplitude of tremor is Strombolian activity showed a marked decrease, followed by cessation each eruptive activity in the late morning of day 8. (INGV)


Mount Etna is one of the most active volcanoes in the world and is in an almost constant state of activity. On  12-13 January 2011 lava expulsion occurred from the vent on the east flank of Etna’s Southeast Crater cone, lasting more than 1.5 hours. Italian Authorities were forced to temporarily close airports for a couple of hours while the ash cloud cleared.