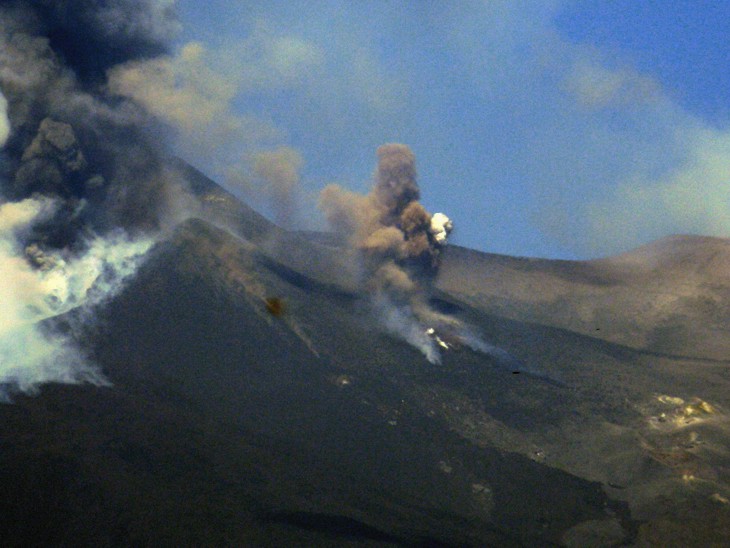 After an interval of ten days of relative quiet, a new eruptive episode took place at New paroxysmal Crater South-East (New CSE) Etna in the morning of September 8, 2011. This is the 13th episode since the beginning of paroxysmal; the previous episode had occurred on 29 August 2011. As the final episodes, but this event has generated high eruption column that was moved by the wind south-southeast, leading to relapse of ash and lapilli of several towns, including Monterosso, Viagrande Trecastagni, San Giovanni La Punta , and the eastern part of Catania.

In addition, during this paroxysm, lava overflows were observed not only through the deep gap in the sector east-southeast of New pyroclastic cone CSE, but also from its northern edge, where the emissions were made of ash and water vapor, possibly from new vents, whose activity has been intermittent, however.

The “prelude” of this episode began with some ash emissions from the New CSE during the day of Sept. 6, followed by a day of rest (September 7). In the late evening of 7 visual surveillance systems INGV-CT showed the beginning of the weak, and sporadic Strombolian explosions from the New CSE, which continued in a very quiet all night.

At dawn on September 8 was observed numerous ash emissions, followed, from 05:30 (GMT = local time -2) on, by a sudden increase in both frequency and intensity of Strombolian explosions. This activity has generated strong explosions heard in a broad band on the populated south-eastern and eastern sides, simultaneously, there was a sharp increase in amplitude of volcanic tremor and the movement of the source of the tremors from the previous position under the North Crater East to the New CSE, and superficializzazione source. At about 06:30 GMT lava fountains began a button, with the emission of ash increases.

While the lava fountain activity and emission of ash to the vents in the New HSC was increasing, a lava overflow occurred only at 06:50, first through the deep gap nell’orlo eastern crater, and then also along the eruptive fissure that had opened during the episode of paroxysmal August 29, 2011.

This overflow has been accompanied by repeated landslides affecting the unstable walls of the cone in that area. Surveillance cameras from filming the INGV-Catania seems clear that the fracture of August 29 has not been reopened at the climax today.

Instead, from 07:20 hours onwards, have occurred repeatedly in emissions of brown ash mixed with water vapor by two or three white spots on the north side of the cone of the New CSE, in an area affected by a lava overflow from the brink Northern the crater began shortly after the onset of paroxysmal.

The first release is from a point just below the northern edge of the crater, where he had an open fracture of the paroxysmal eruptive episode during the August 29th (the fracture was observed for the first time only during an inspection conducted on September 1 2011), as seen in the first photo on the left.

A second explosive event happened about 20 minutes later by a lower (second photo on the left) that emission lasted 1-2 minutes.

A third issue, much stronger and longer lasting, began at 08:18 hours from a point slightly higher than the source of the issue earlier, and lasted about 5 minutes (third photo on the left). It ‘worth noting that none of these events has generated explosive lava fountains, the activity has always been of relatively short duration, and the relationship between the sources of explosions and the effusive activity is unclear.

These explosive episodes on the northern flank of the cone contrast sharply with the opening of the eruptive fissure on the south-east of the cone of the New CSE during the episode of paroxysmal August 29, 2011, where the activity is continued until all of the paroxysm, and was characterized by the production of both lava fountains and lava of. 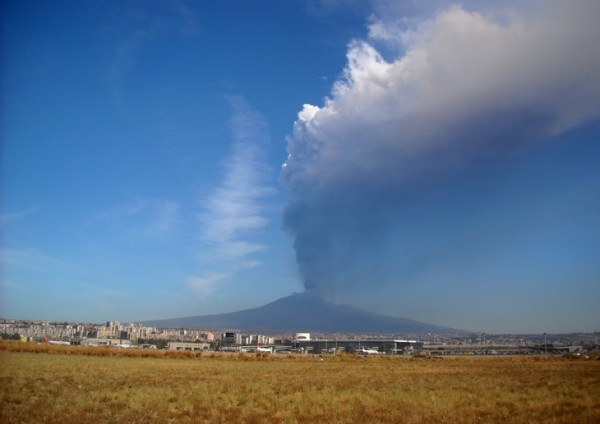 Paroxysmal activity began to decrease in intensity between the hours 08:25 and 08:30 GMT to cease completely at around 08:45 GMT, followed by only a few shots of emission of ash rather than passive. 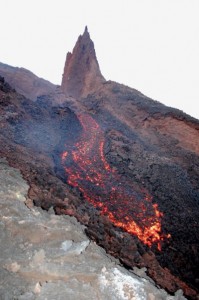 Meanwhile, the lava flow down the western slope of the Valle del Bove took the same path as the lava emitted during the episode of paroxysmal August 29, after the opening of the eruptive fissure on the south-east of the cone, the expansion fronts of the most advanced is continued for a while ‘time after the end of feed for gravitational flow.Small lava flows were observed for several hours after the end of paroxysmal, remaining confined to the immediate vicinity of the crater.

Once again, the pyroclastic cone formed around New SEC during the current series of episodes of paroxysmal has undergone significant changes to its morphology: the southern and northern crater rims have grown further in height, while the degradation of the south-eastern side was accentuated. ž

A ridge of rock composed of stratified slag has been rotated and lifted by a previously unknown mechanism for creating a rocky prominence about 20-30 m high, shaped like a “thorn” very steep, locally vertical walls and sub-vertical.

This incident happened 10 days after the previous one, and it was especially for the short phase of growth by weak Strombolian explosions to fountains and sustained generation of high eruption column.

In addition there were explosive events from different points on the northern side of the cone of the New HSC, possibly due to the opening of new vents, but the explosive character of these events was very different during the opening of the activity observed eruptive fissure on the flank of the cone in the morning of August 29, and in many other paroxysmal episodes earlier, as especially during the long series of such events between January and August 2000.

Etna is the largest volcano in Europe and among the most active volcanoes in the world. Its eruptions occur both at the top, where currently there are four craters, from both sides, up to heights of a few hundred meters above sea level.