On the evening of 28 September 2011, the New Southeast Crater of Etna has produced its 15th paroxysmal eruptive episode since the beginning of this year. The culminating phase of this episode lasted less than a half hour but was more violent than those of the preceding paroxysms; on the contrary lava emission was rather minor, forming two small flows that reached the upper part of the steep western slope of the Valle del Bove. The ash plume was driven southwestward by the wind. 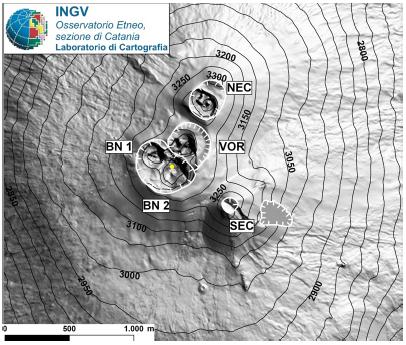 The 15th paroxysm of Etna's New SE crater occurred a few days earlier than what statistically had been expected (based on the steady increasing intervals between the past similar events). Bad visibility due to clouds and rain prevented detailed observations, but the activity started slowly during the afternoon, with exponentially rising levels of volcanic tremor, ash emissions and increasing strombolian activity originating from probably several vents inside the new crater.
The eruption culminated in a brief (1 hour approx) phase of lava fountaining around 9-10 pm, and produced large lava flows towards the E and ESE into the Valle del Bove. The eruption was over at around 11pm, after a peak between around 9-10pm. This marks #15 in the series of powerful eruptions of the New SE crater in 2011, and followed the previous one on 19 SSep after an interval of 9 days. (VolcanoDiscovery) 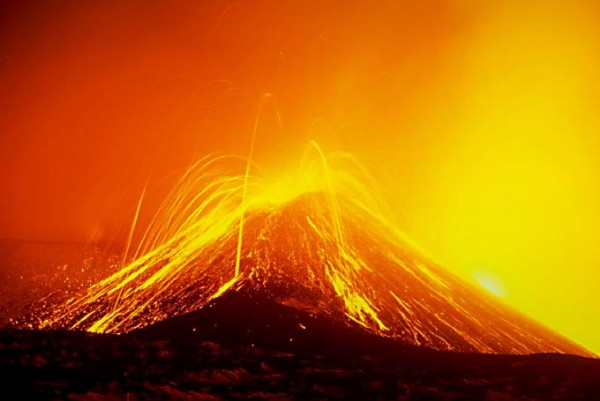 Mount Etna, towering above Catania, Sicily’s second largest city, has one of the world’s longest documented records of historical volcanism, dating back to 1500 BC. Historical lava flows cover much of the surface of this massive basaltic stratovolcano, the highest and most voluminous in Italy. Two styles of eruptive activity typically occur at Etna. Persistent explosive eruptions, sometimes with minor lava emissions, take place from one or more of the three prominent summit craters, the Central Crater, NE Crater, and SE Crater. Flank eruptions, typically with higher effusion rates, occur less frequently and originate from fissures that open progressively downward from near the summit. A period of more intense intermittent explosive eruptions from Etna’s summit craters began in 1995. The active volcano is monitored by the Instituto Nazionale di Geofisica e Volcanologia (INGV) in Catania.

The Tongan Navy has reported major damage in the Ha’apai Islands after the major eruption at Hunga Tonga-Hunga Ha'apai volcano on January 15, 2022. Waves that hit Ha'apai Islands were estimated to be 5 - 10 meters (16 - 33 feet) in height, reaching...