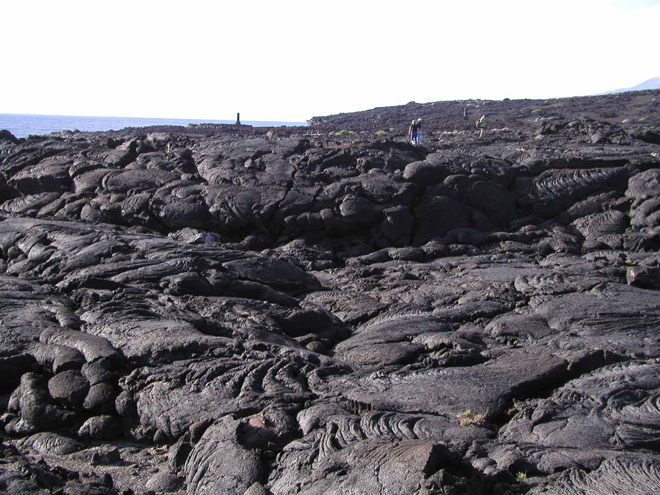 Since mid-July, the small island, which is the top of a shield volcano built by the Canary Hotspot, has registered over 8,000 earthquakes  (check out the excellent video of the changing depth and location of seismicity put together by Eruptions reader Lurking (or is it GeoLurking now?)). Until recently, the earthquakes have not been noticeable to the people living on El Hierro, but since Monday, multiple ~M3-4 earthquakes have occurred, with 30 earthquakes alone on Monday. Interestingly, if you look at the distribution of the earthquakes (see below), the earthquakes over the last few days are deeper than those 4 days ago or older. Many are centered 14-16 km below the surface of the volcano, putting them into the upper mantle, the likely source of the magma in the Canary Hotspot plume. 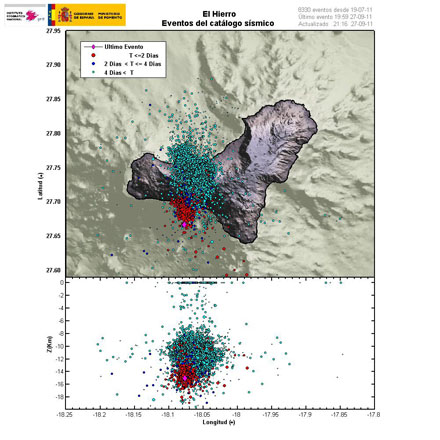 The increasing seismicity and intensity might suggest that an eruption is in the cards, but you would really expect the earthquakes should be getting shallower as magma nears the surface and right now, it doesn’t appear to be the case. Maria Jose Blanco, director of the National Geographic Institute on the Canaries puts the chances of an eruption in the near future at ~10%, although carbon dioxide emissions are steadily rising (spanish), another clue on new magma degassing under the volcano.

However, the local government on El Hierro isn’t taking any chances. The volcanic seismicity has prompted the closure of a tunnel on the island and 300 people have been evacuated to temporary shelters for fear of earthquake-triggered landslides, along with offering some instructions on how to deal with the potential for earthquakes on the island.

For El Hierro, the major hazard will be lava flows and potentially ash from the likely fissure vents that might open on the volcano – think about eruptions from Piton de La Fournaise or Kilauea as examples. You can watch El Hierro’s seismicity on some of the IGN webicorders. It has been a while, potentially almost 2,500 years since the last (and confirmed) known eruption at El Hierro, so this would clearly be the first since Europeans settled there. However, the signs right now still don’t suggest an eruption is inevitable, but rather magma is moving in the lower reaches of El Hierro’s magmatic system. (Wired)

El Hierro Island covers an area of 278 sq km, and contains three well-defined ridges, arranged at approximately 120 degrees. According to the hotspot model of volcano formation, the current location of the Canary islands hotspot is under Hierro Island.

El Hierro volcano  has been modified by gravitational spreading which caused gigantic landslides. El Golfo is a major debris avalanche on the northern flank of Hierro Island, dated about 13,000 years ago. It has a width of 15 km and a scarp height of 1000 m. The landslide deposited 150-180 cubic km of debris on the seafloor down to a depth of 3000 m. The swarm occurred at El Golfo in the northwest of the island at the location of a landslide that created a 100 metre high tsunami about 50,000 years ago.