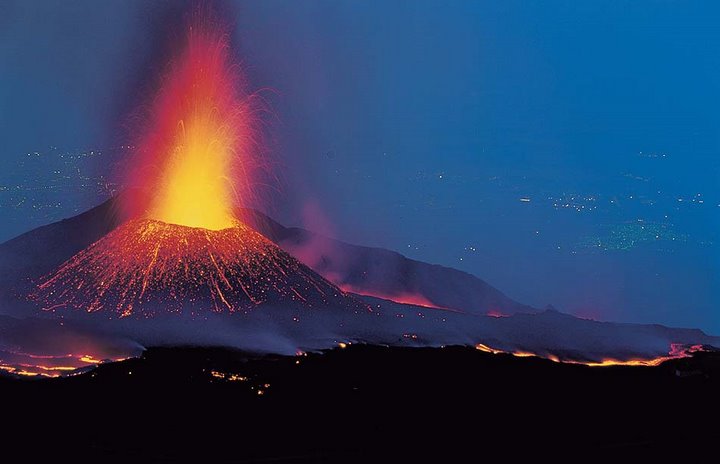 The 14th paroxysm of Etna’s New SE crater is in progress. Bad weather conditions hide the eruption, but the seismic signals of INGV Catania show that a major eruptive episode is occurring. Since 9am, volcanic tremor has been gradually increasing to (at the moment) 30+ times background levels, and is still rising. Most likely, lava fountains are being ejected from vents inside the crater and lava flows descending into Valle del Bove if the new episode is similar to the previous ones.
Paroxysm nr 14 thus follows almost exactly 11 days after the previous, confirming the steady increase of invervals between eruptions from 6,7,8,9,10, and now 11 days. Will the next eruption then occur on 19 Sep + 12 days = 1 October? (VolcanoDiscovery) 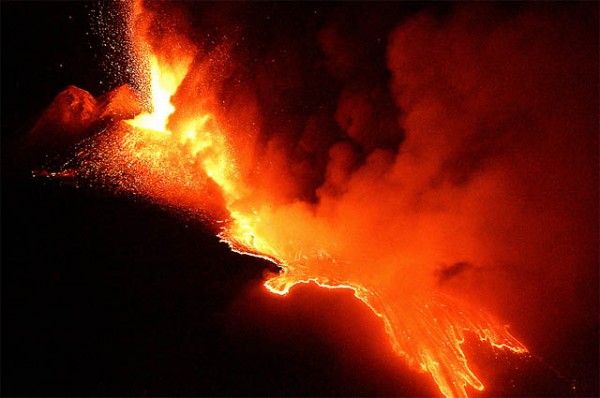 The paroxysmal episode 14 from the New South-East Crater at this year took place the day of 19 September 2011, after 11 days of relative calm. This event, which took place in bad weather conditions, has produced lava fountains from several vents within the crater, but also on its southeastern flank, lava flows, which fell on the western side of the Valle del Bove, and a cloud ash that has been bent by the wind to the northeast. Fallout of ash were observed in the area north of Giarre. Paroxysmal activity lasted from 12:20 hours GMT (local time -2) around until just after 13:00 GMT. On the evening of September 19 was still in progress of a weak spattering from a vent at the base of the cone of the south-eastern New South-East Crater, and the continued emission of lava on the western side of the Valle del Bove.

Paroxysmal eruptive episode from the 14th Etna’s Southeast Crater has taken new place on 19 September 2011, 11 days after the ITS predecessor. This event, which effectively occurred during poor weather conditions rather, produced lava fountains from within the various vents and crater on the southeastern flank the ITS, lava flows descended the western slope That of the Valle del Bove, an ash cloud That Was bent by the strong wind Toward northeast. Ash and lapilli falls Were Observed in the area to the north of Giarre. The main paroxysmal phase lasted from about 12:20 GMT (local time -2) until Shortly after 13:00 GMT. On the evening of September 19, continued weak spattering from a vent located at the southeast base of the Southeast Crater cone, and lava flows continued to descend active on the western slope of the Valle del Bove. (INGV Catania)