Italy’s Mount Etna is currently in a period where short bursts of activity, each lasting a few hours, are interspersed with quiet periods lasting several days or weeks. Thirteen eruptive episodes, or paroxysms, had occurred by mid-September 2011. During a typical paroxysm, lava fountains at the New Southeast Crater send flows down the eastern slope of the volcano, often accompanied by a dense ash plume. 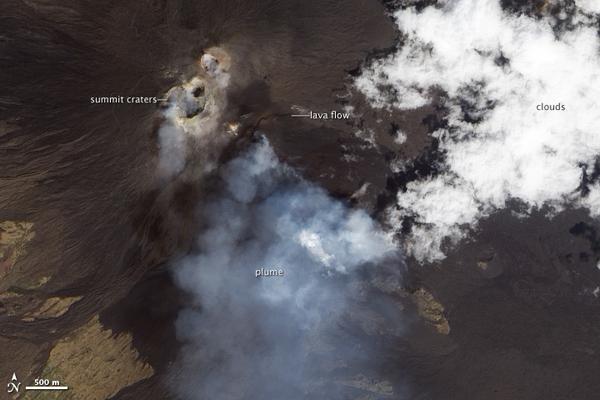 This natural-color satellite view of Mount Etna shows the volcano on September 8, 2011, just as the most recent paroxysm subsided. The image was acquired by the Advanced Land Imager (ALI) aboard the Earth Observing-1 (EO-1) satellite. The center of activity—the New Southeast Crater—is hidden by a gas-rich plume. A lava flow extends about 2 kilometers (1.2 miles) to the southeast. Although the flow is obscured by the gases, heat from the flow glows bright red in a false-color image. A smaller lava flow to the north of the crater is visible as a thin black line. In the wider view, ash from an earlier stage of the eruption is visible over the coastal town of Catania. (OAP)