Rare event  Rare waterspouts spotted in the Strait of Georgia for 2 days in a row, Canada

Ma-On will become a Super Typhoon

Typhoon Ma-On, now packing 135-mph winds, continues to threaten Japan. Landfall in southern Japan is a distinct possibility as early as Monday night local time.
Winds in Ma-On strengthened from 105 mph to 135 mph in just 24 hours. Further strengthening is expected as it passes across the extremely warm waters of the Philippine Sea. Ma-On will become a Super Typhoon (winds 150 mph or higher) Friday night or Saturday. Although not expected to be in the direct path, U.S. military bases in Okinawa will likely have strong winds and heavy rainfall this weekend from the outer bands of Ma-On. 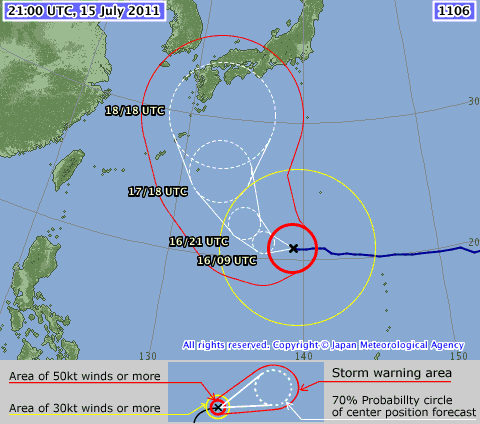 Ma-On will reach its peak intensity this weekend with sustained winds in the 150- to 160-mph range. The storm will track westward through Friday night, before turning northwestward and northward during the weekend. The earlier the turn to the north occurs, the better chance Ma-On will miss a direct landfall on southern Japan. However, the most likely track at this time takes Ma-On into the Kyushu or Shikoku islands in southern Japan early next week.
Widespread adverse impacts from rain, wind and heavy seas would result from a direct hit on the southern mainland. Heavy rain, high winds and rough seas could also impact the site of the tsunami and nuclear disaster north of Tokyo.
Storms of the kind that Ma-On is likely to become can unload extreme rainfall of 10 to 20 inches, with flooding and mudslides, upon reaching Japan. Greater Tokyo is unlikely to feel the worst of the storm, no matter its ultimate track. Still, flooding rain and damaging winds could hit at midweek.

Heavy rainfall is expected in the tsunami-ravaged areas north of Tokyo. Late in May, Typhoon Songda brought 4-8 inches of rain to this area, triggering flooding that killed more than 10 people. Typhoon Songda, also brought wind gusts of 125 mph to Okinawa. (AccuWeather)