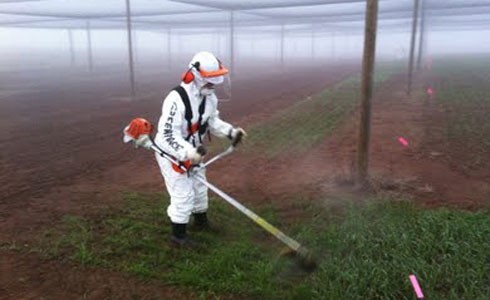 Environmental activists broke into an Australian government research farm Thursday and destroyed an experimental crop of genetically-modified wheat protesting against what they said were safety issues.

Armed with weed trimmers, three Greenpeace activists scaled a fence at the Canberra facility in the early hours of the morning and razed the crop, which had been modified to lower its glycemic index and increase fibre. The government science agency running the trials, CSIRO, confirmed there had been "a break-in overnight at their crop trial site" and it was assessing the damage. CSIRO is currently assessing the damage to the trial crops and considering next steps."

Greenpeace said the activists, three women, wore hazardous materials suits to keep them from carrying GM organisms out of the site, and were motivated by concerns about the trial's safety.

"The government has said they would commercialise GM wheat by 2015 in Australia, that would make us the first country in the world to approve GM wheat to be commercially grown," said campaigner Laura Kelly."But the polling shows Australians don't want to eat it."

Kelly said GM wheat had been proven to contaminate other crops and there was no evidence it was safe to eat, with major exporters including the European Union, Russia and Canada rejecting the crop. Japanese flour mills, a major market for Australian wheat, had also made it clear they would not buy GM products and Kelly said the nation's Aus$4.7 billion bulk export market was at stake. 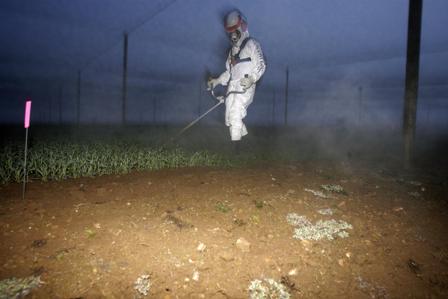 The half-hectare CSIRO crop is intended for dough baking trials for feeding to rats and pigs, with an eye to human trials, though the agency would have to get a fresh licence to test the grain on people. The CSIRO said it had taken a series of precautions to limit contamination, enclosing the crop with a two-metre double-reinforced fence and bird netting over the top, and spreading mouse traps throughout the site. There was a two to four-metre buffer zone and the 10 metres beyond the fence were treated regularly with herbicide.

A police spokeswoman said no charges had yet been laid and "at this stage investigations are just still ongoing", but Kelly said she would be surprised if a criminal case was not launched. (FarmNews)