Why is so hot and getting hotter

It's not the hot, mid-summer look of the sky over the eastern half of the U.S. that has meteorologists worried. It's late July, after all, and the sun's angle in the sky is as high as it gets.

What worries forecasters is that they can see no change in these conditions - no relief from the heat - for at least eight to 10 days, as far out into the future as their high-powered weather models can reliably take them.

The National Weather Service put it bluntly Thursday: "The stage is being set for a massive heat wave to develop into next week as a large area of high pressure is anticipated to circulate hot and humid air over much of the central and eastern U.S. Maximum heat index values of at least 100° F are likely across much of this area by the middle of next week, with heat index values in excess of 110°F possible over portions of these areas." 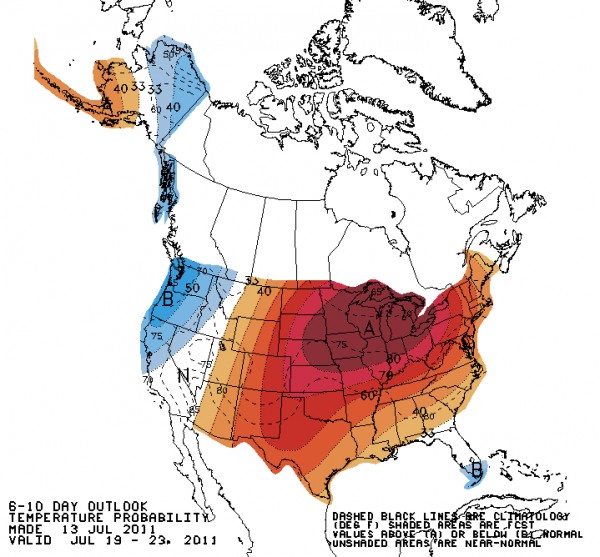 The focus over the next week, the point where it looks worst, is Minnesota down into the middle plains states. Squatting over the landscape for the next several days will be a large dome of of air that is sinking, compressing and getting warmer as it falls. This stable area of unusually high pressure, while blocking heat-relieving storms, is forcing a clockwise pattern of moisture-carrying winds that makes matters worse. It's the combination of intense heat and high humidity - the heat index - that makes for a miserable day -- but it's these days and nights strung together that makes heat waves so dangerous. Individual hot days, they happen every year and are bad enough on their own. What makes this different is the duration and the persistence of it. (DiscoveryNews)