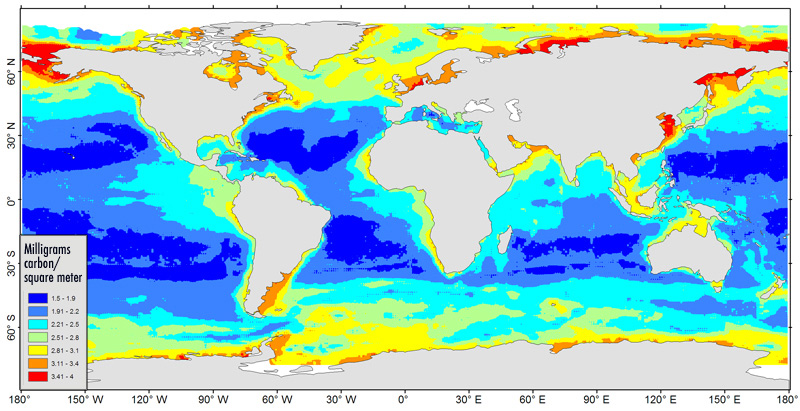 The vast majority of the biological production in the world's oceans occurs within sunlit surface waters – the so-called photic zone. Through the process of photosynthesis, tiny marine plants called phytoplankton use the energy of sunlight to build the carbon-rich organic molecules needed for growth. When they die, a proportion of the organic matter sinks to the ocean depths, where it is used as food by all manner of deep-sea life.

"With the exception of chemosynthetic communities living around hydrothermal vents and other chemical energy sources, deep-sea ecosystems are entirely dependent on the supply of organic material from miles above," said Dr Brian Bett of the NOC.

"An important question is whether variation in food supply explains patterns of regional seafloor biomass, or whether other oceanic factors such as seafloor relief and bottom water characteristics are responsible," he explained.

To help address the issue, the researchers assembled data on the biomass and abundances of species living at the seafloor in different regions. Many of these data were collected during CoML field projects.

They then used a computer algorithm called Random Forests to model and predict seafloor standing stocks from biological production in the photic zone, the amount of organic matter exported to the depths, seafloor relief, and bottom water characteristics.

"Random Forests uses input data to generate a global picture of seafloor biomass and abundance, learning from its own mistakes as it goes along," explained Dr Bett.

The researchers used the algorithm to generate individual and composite maps of predicted global seafloor biomass and abundance of bacteria, small and medium sized animals living on or in the seafloor sediments, as well as larger animals such as crabs and fish.

They found a strong positive relationship between surface production and organic matter export, on the one hand, and predicted patterns of seafloor biomass and abundance on the other, with seafloor relief and bottom water characteristics playing secondary but significant regional roles.

According to their analysis, seafloor biomass is highest around the poles, and on continental margins, where upwelling waters supply nutrients needed for phytoplankton growth in the photic zone. Values are also high near the equator where the interaction of wind-driven currents causes upwelling. In contrast, they found consistently low seafloor biomass on the central abyssal plains of the major ocean basins.

The dominance of different groups of organisms in terms of their abundance or biomass depends on seafloor depth. Smaller-bodied organisms tend to dominate the food limited depths of the ocean.

"The Census and associated maps provide important insights into the functioning of deep-sea ecosystems and their role in the global carbon cycle, and will also contribute to evidence-based ocean management," said Dr Bett. "Our study truly highlights the tremendous value and continuing importance of long-term observations and international collaboration in understanding our oceans and their ecosystems."