After a six-year study of conditions across the globe, team of international researchers came upon shocking results that the world's ocean are laden with a minimum estimate of 5.25 trillion plastic particles weighing 268 940 tons.

Larger plastic debris around coasts gets churned into tiny particles further from shore, and these micro-plastics then make their way into the food chain. Some of these plastics (Polycarbonate, Polystyrene, PETE…) sink, while others (LDPE, HDPE, Polypropylene, foamed plastics…) float on the oceans surface. Wave action and sunlight cause these floating plastics to fragment into smaller particles that pose significant hazard for marine wildlife.

Also, as plastic particles circulate through oceans, they act as sponges for waterborne contaminants such as PCBs, DDT and other pesticides, PAHs and many hydrocarbons washed through our watersheds. These persistent organic pollutants, called “POPs”, absorb and adsorb onto plastic pollution in high concentrations. 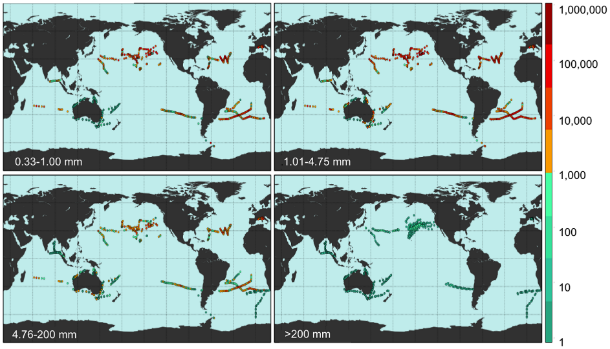 Researchers left surprised to find micro-plastics in remote areas, suggesting that gyres actually shred up large plastic items into tiny particles which spread easily across the oceans. Gyres are large circulating whirlpools in which garbage can accumulate. There are five major oceanic gyres worldwide, with several smaller gyres around Alaska and Antarctica.

"Our findings show that the garbage patches in the middle of the five subtropical gyres are not the final resting places for the world's floating plastic trash. The endgame for micro-plastic is interactions with entire ocean ecosystems." study author Marcus Eriksen, director of research for the Five Gyres Institute 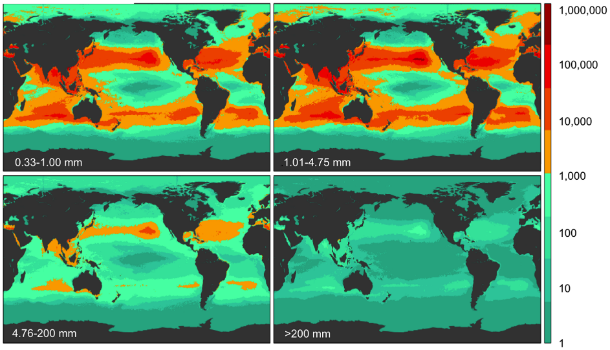 Researchers compiled data from 24 expeditions around the world (including coastal Australia, the Bay of Bengal, and the Mediterranean Sea) in period from 2007-2013. Micro-plastics were collected using net while visual surveys accounted for larger coastal debris. Using an oceanographic model of floating debris dispersal calibrated by collected data, and correcting for wind-driven vertical mixing, researchers estimate a minimum of 5.25 trillion particles weighing nearly 269 000 tons.

The findings were released on December 10, 2014 in the journal PLOS ONE.