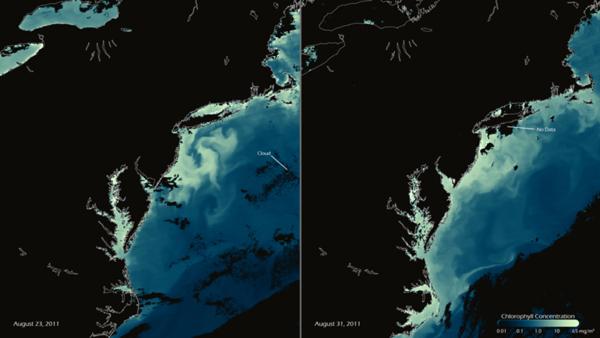 Hurricanes have marked effects not just on land, but also on coastal waters. Their high winds mix ocean water, bringing nutrients to the surface at a time when warm summer waters are often nutrient-depleted. The nutrients spur algae to grow, creating large blooms of algae. Such blooms can be seen in these images from the NASA Aqua satellite that detects surface chlorophyll (taken on August 23 and August 31, before and after the passage of Hurricane Irene, respectively) the chlorophyll along the coast has changed dramatically.

From the Outer Banks to Delaware Bay the coastal chlorophyll concentration has increased by a factor of 10 due to a large increase in algae along the coast. From New Jersey to Cape Cod, the images show how Hurricane Irene reworked the structure of existing algae blooms with her intense mixing.

Note also the very long filament of high chlorophyll extending from the Outer Banks eastward into the Atlantic Ocean. These filaments are common after hurricanes in this region and are thought to arise from the added nutrients upwelled along the north wall of the Gulf Stream.

Higher chlorophyll is evident after the passage of hurricanes for three reasons: mixing and upwelling of nutrients induces algae growth, deeper chlorophyll is brought to the surface through the mixing, and patches of algae are redistributed to other areas. All three processes are likely occurring presently along the East Coast due to the effect of Hurricane Irene.

Federal and state government agencies are currently sampling these coastal waters for harmful algae, bacteria, pesticides and sediment to ensure public health and the health of fisheries in the wake of the storm. Satellite data and analysis from NOAA CoastWatch gives resource managers and responders timely assessments for when and where these potentially problematic areas may have arisen. The Aqua satellite provides advanced remote sensing capabilities of ocean color that will be continued on the future NASA NPP and NOAA JPSS satellite missions. (OurAmazingPlanet)