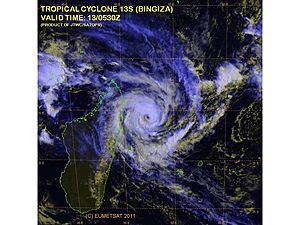 Tropical Cyclone Bingiza has intensified to Category 3 hurricane strength. It is expected to maintain that strength prior to slamming into the southwestern Indian Ocean island of Madagascar within the next 24 hours.

Tropical Cyclone Bingiza has taken on a westward track and is expected to continue just south of west prior to making landfall.

The outer rain squalls of Bingiza have been drenching the island's northeastern coast since early Friday morning. However, the worst has yet to come for Madagascar.

Damaging winds, flooding rain and extremely rough surf will endanger residents of eastern Madagascar over the next 24 to 48 hours as Bingiza slams onshore with hurricane strength.

The AccuWeather.com Hurricane Center is expecting landfall between the eastern Madagascar coastal cities of Vinanivao and Vatomandry Sunday night EST.
Once onshore, the damaging winds accompanying Bingiza will weaken rapidly. Flooding will remain a serious concern, however, through at least early next week.

According to AccuWeather.com International Expert Meteorologist Jim Andrews, "Tropical cyclone landfalls on the huge island of Madagascar happen almost yearly during the Southern Hemisphere cyclone season, which is most active in this area from January into April." 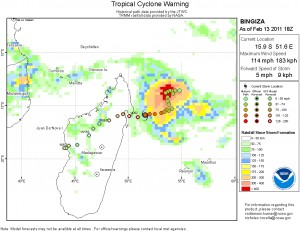