New Zealand's MetService has issued a Red Warning for Heavy Rain in Westland and Buller, valid from 01:00 LT on Wednesday, February 2, 2022 (12:00 UTC, February 1). Dangerous river conditions are likely during this high-impact weather event, as well as significant flooding, landslides and travel disruption. Some communities might end up cut off from the rest of the region.

The extreme rain accumulations will cause disruptions across the regions that saw a similar system in July 2021.1,2

While the current warnings are in place until Thursday night,  the band of rain hangs around our shores so these warnings are likely to be extended and rain is forecast to make it across the North Island during the weekend.

"The West Coast is one of the wettest parts of New Zealand, but this system is far from a normal wet day on the coast," MetService meteorologist, Lewis Ferris warns.3

"Significant impacts such as flash flooding and landslips are expected. It’s been unusually dry in these areas which may compound the impacts." 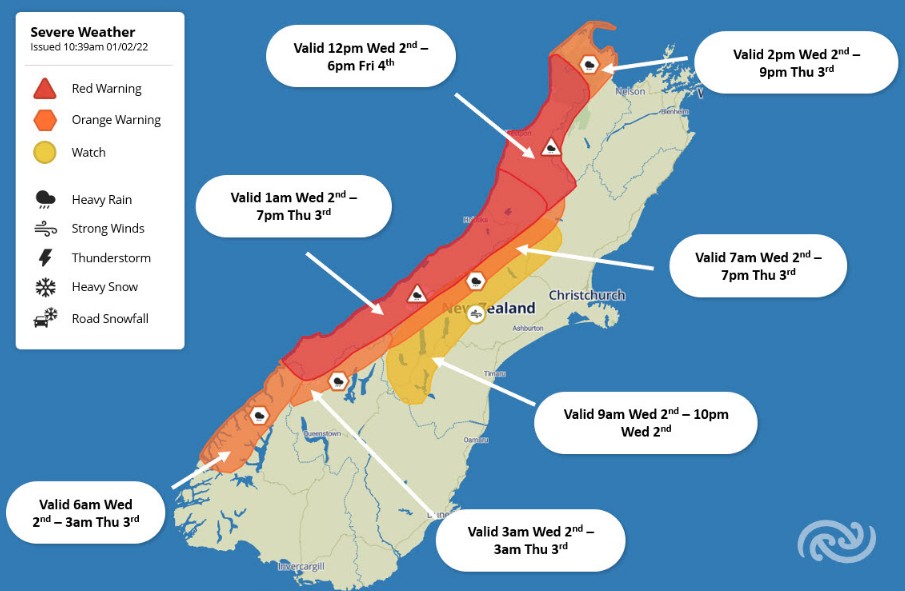 Even though river levels are currently low the intensity of rain to come will mean these quickly rise and extreme caution is advised.

Closer to the coast the highest risk of flooding comes when the tides are high.

Delays on the roading network are also to be expected so it’s worth considering if travel is necessary. Communities are at risk of being isolated with power and communications outages possible so follow advice from local authorities.

The persistent heavy rain is also accompanied by the risk of downpours in thunderstorms. This brings the potential of rain rates around 40 mm/hr (1.6 inches per hour) which would amplify the speed at which impacts are observed.

Orange Warnings for Heavy Rain are also in force for most neighboring regions.

While the biggest impacts are likely within the Red Warning area bear in mind that surrounding regions will also need to be on alert as large amounts of rain falling near the peaks can cause rivers to rise in areas not under a Heavy Rain Warning, MetService meteorologists said.

"We have been working with West Coast Regional Council and Civil Defence to provide as much early warning of this impactful event as possible for locals and those who might be planning on traveling to the region for the long weekend," Ferris said.

This will be a high-impact weather event, with more rain likely for some beyond Thursday AM.

Flows in the Buller River will rise, but it's still too early to grasp the severity. https://t.co/zl8VWyAo6s pic.twitter.com/nYkWtlNdcJ

This is the fifth Red Warning MetService has issued since the color-coded system was introduced in 2019. These are reserved for the most significant weather events.