A major winter storm is set to bring disruptive snow and ice accumulations from the Rockies and the Heartland to the Great Lakes beginning Tuesday night, February 1, 2022, and continuing through Thursday morning, February 3. Significant disruptions to travel are anticipated in these affected regions. Bitterly cold temperatures will follow the wintry precipitation.

An amplifying upper trough, currently barreling through the western U.S., will be the driving force for a dangerous winter storm across the central part of the country beginning Tuesday night, NWS forecaster Kebede noted.1

This winter storm will bring a variety of winter weather hazards including heavy snow, sleet, and freezing rain.

The upper trough will slow as it makes its way through the CONUS, meaning that a prolonged event with several rounds of winter weather will occur through Thursday for portions of the central U.S. before shifting to the interior Northeast.

Heavy snow is expected over the Southern Rockies and from the South-Central Great Plains through the eastern Great Lakes and interior Northeast.

Snowfall totals of 15 – 30 cm (6 to 12 inches) are expected over parts of the Southern Rockies and Central Plains to Midwest by Thursday morning.

Locally higher totals are possible, especially over the higher mountain elevations of the Rockies. A corridor of heavy ice accumulation (exceeding 6 mm / 0.25 inches) is likely from Texas through the Ohio Valley.

Winter Storm Watches and Warnings are in effect for much of the areas to be affected by heavy snow and ice. 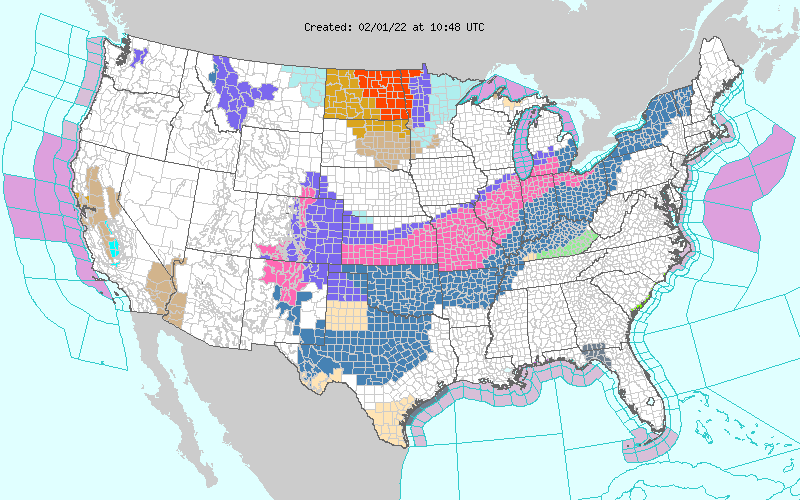 Locations impacted by snow and/or ice are expected to have temperatures remain below freezing, and well below average, for at least a couple of days after the wintry precipitation ends. This will be due to the emergence of arctic high pressure, which will descend over the Great Plains on Wednesday.

This high pressure will send very frigid air down through the Plains between Wednesday and Friday, February 4.

High temperatures for many places across the Plains will be between 8 and 14 °C (15 – 25 °F) below average during this period.